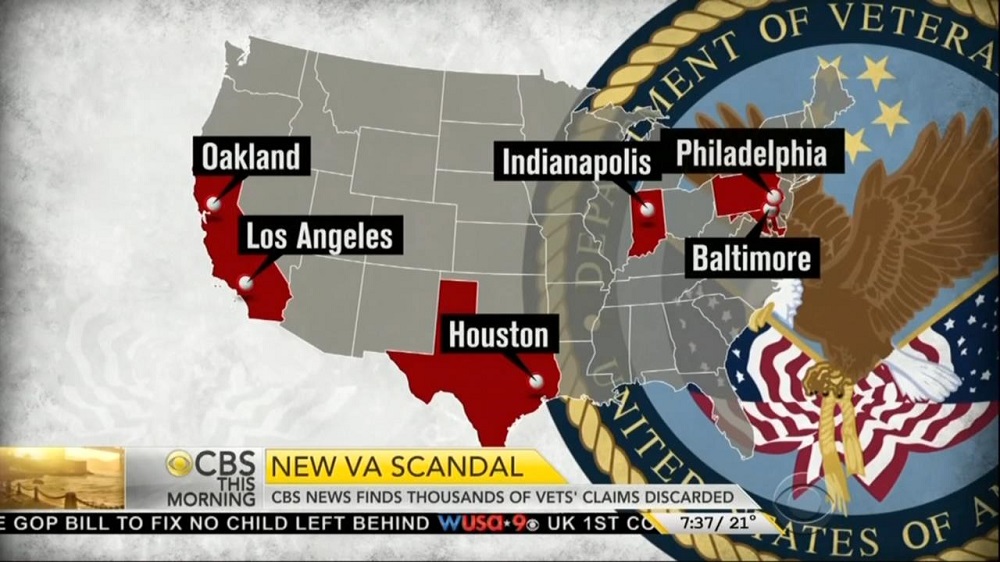 Wyatt Andrews revealed the details of a new scandal at the Department of Veterans Affairs on Wednesday's CBS This Morning. Andrews zeroed in on how the veterans'  benefits office in Oakland, California simply ignored "more than 13,000 informal claims filed between 1996 and 2009 – all of which were stashed in a file cabinet and ignored until 2012." The correspondent spotlighted whistleblowers who claimed that "V.A. supervisors in Oakland ordered [employees] to mark the claims 'no action necessary,' and to toss them aside."

Andrews later put the California benefits office in a larger context of government "mismanagement" across the country – which included allegations of cover-ups by federal employees: [video below]

WYATT ANDREWS: ...[T]he V.A. inspector general confirmed that because of 'poor record keeping' in Oakland, 'veterans did not receive benefits to which they may have been entitled.' How many veterans is not known, because thousands of those records were missing when the inspectors arrived.

Lost claims and missing records are a problem nationwide. In the last year, the I.G. has found serious issues in at least six V.A. benefits offices – including unprocessed claims documents in Philadelphia; 9,500 records sitting on employees' desks in Baltimore; and computer manipulation in Houston to make claims look completed when they were not.

Anchor Norah O'Donnell introduced the journalist's report by noting "last summer's scandal at a Phoenix V.A. hospital, which rocked the Department of Veterans Affairs. CBS News investigations revealed widespread manipulation of appointment wait times." She continued that "CBS News has uncovered similar mismanagement within the Veteran Benefits Administration." Andrews first outlined that "the veterans benefit side of the V.A. pays out $95 billion a year. That's in disability benefits, pensions, and even the American flags that veterans receive at their funerals. But our investigation has found widespread mismanagement of those claims, resulting in veterans being denied the benefits that they've earned – with many veterans dying before the V.A. gets around to answering the claim."

During the segment, the CBS correspondent featured one widow who was directly affected by the scandal, and two whistleblowers, who gave their accounts of what they witnessed:

DORRIE STAFFORD: Why would they take ten years to send me a letter? 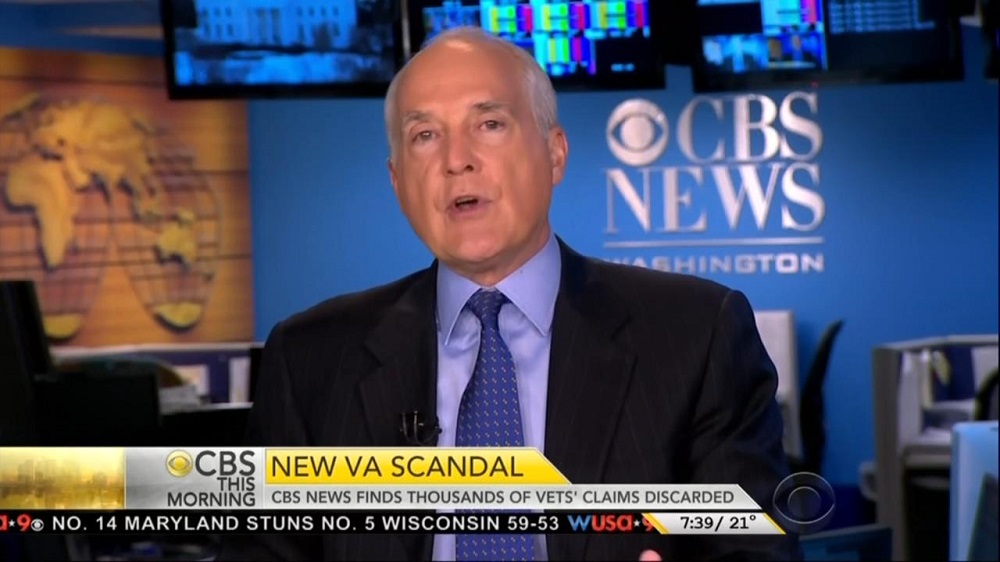 ANDREWS (voice-over): Dorrie Stafford says this letter, obtained by CBS News, shows how badly the V.A. claims system is broken. It's dated July 29, 2014, thanking Dorrie's husband, Wayne – an Army veteran – for the disability claim he filed in July of 2004. That decade-long delay is just one problem. The other is that Wayne Stafford died in an accident seven years ago without hearing a word from the V.A.

ANDREWS (voice-over): Five whistleblowers at the Oakland, California veterans benefits office tells CBS News that Stafford's claim is one of more than 13,000 informal claims filed between 1996 and 2009 – all of which were stashed in a file cabinet and ignored until 2012. Informal claims are letters from veterans expressing a desire to apply for benefits, and by law, the V.A. must respond with an application.

RUSTYANN BROWN: We were getting letters from elderly veterans and from widows who were literally at the end of their life begging for help.

ANDREWS: Rustyann Brown was part of a team finally assigned to process those claims two years ago; and the job began, she says, with a disturbing discovery.

BROWN: Half of the veterans were dead that I screened. So almost every other piece of paper that I touched was a veteran who had already passed away.

ANDREWS (on-camera): And so, that means they died – this veteran died waiting for their first answer.

ANDREWS (voice-over): But whether the veteran was dead or still alive, Brown says V.A. supervisors in Oakland ordered her team to mark the claims 'no action necessary,' and to toss them aside. Whistleblowers say that was illegal.

ANDREWS (on-camera): They wanted you to hide them?

ANDREWS (voice-over): When Brown raised concerns, she says she was taken off the project. Then, this past summer, Brown and former V.A. employee Tony Silviero found a cart full of those same claims ignored yet again.

ANDREWS (on-camera): And this was a year ago.

BROWN: This was just a few months ago-

After summarizing the inspector general's findings about the Philadelphia, Baltimore, and Houston benefits offices, Andrews pointed out that Mrs. Stafford, the widow, "now lives with friends in the mountains of northern California, in a home with no electricity." He underlined that her case was "an example of what happens when the V.A. conceals a file. It doesn't just harm the veteran. It could also hurt the family. Typically, a surviving spouse is offered a American flag, help with burial expenses, or even a modest pension. But none of that happens if there's no file."

The journalist then spotlighted the two whistleblowers' concerns about the "lost" claims:

ANDREWS (voice-over): To the whistleblowers, all those lost files also raised serious questions of whether the V.A. is accurately reporting the true number of disability claims.

ANDREWS (on-camera): When they hid all of these thousands of claims, that was not in the backlog.

ANDREWS: It took the claims out of the backlog.

ANDREWS: Are you saying that part of the reason to hide them was not to have them show up in the system at all?

Andrews ended the segment by reporting Veterans' Affairs' response to their investigation:

ANDREWS: The V. A. declined our many requests for an on-camera interview. It did admit to widespread problems in the handling of claims, but blamed that on the transition from a mail-based system to a new electronic system. The V.A. said in this statement, 'Electronic claims processing has transformed mail management for compensation claims, greatly minimizing any risk of delays due to lost or misplaced mail.'

As for the backlog, the V.A. is again promising to fix any problem that comes to its attention. Again, quote, 'For any deficiencies identified, steps are taken to appropriately process the documents and correct any deficiencies.' Norah?

NORAH O'DONNELL: Wyatt, incredible reporting by the investigative team and you, and so important. What do you think this means for the backlog?

ANDREWS: Well, Norah, let's take what Secretary McDonald said yesterday, where he claimed that the backlog has been reduced by 60 percent to roughly 500,000. I mean, give the V.A. credit: everybody tells us that they are stepping up the processing of claims. But every expert is also telling us – and I'm talking about whistleblowers; I'm talking about veterans' groups; the office of inspector general – they all say the V.A. has lost basic data integrity in how they tabulate these claims – starting with the number of claims that they outright conceal or simply aren't counting.

It should be pointed out that Wednesday's CBS Evening News ran an edited version of Andrews's report from CBS This Morning.