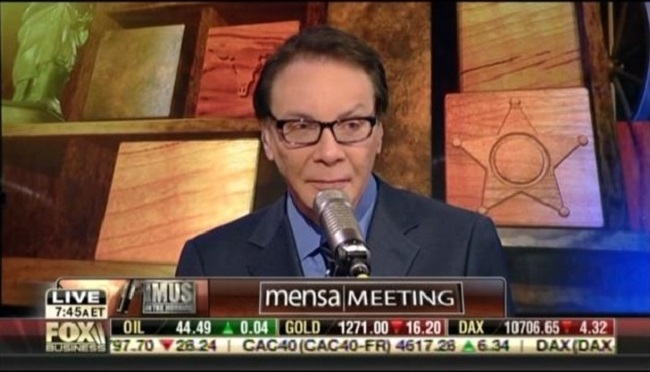 Alan Colmes ran to the defense of the Obama administration on Thursday's Imus in the Morning on Fox Business over their deliberate avoidance of using the term "radical Islam." Producer Bernard McGuirk took a shot at the White House, asserting that "we should say 'Islamic extremism,' because by not saying it is not going to appease anybody." Colmes repeatedly underlined, "It's not Islam," and claimed that the administration's strategy "makes it less dangerous, because you're not going after an entire religion." [video below]

Moments before he confronted McGuirk, the former Hannity & Colmes host took aim at critics of the President's foreign policy approach: "If you want to have a good relationship with other countries, that is in the best interests of the United States. To simply say – well, you know, we're too concerned about what they think about us overseas – we should be, because that helps create a better world. Why is one in opposition to the other? They both work together."

The show producer responded with his "we should say 'Islamic extremism'" line, which led to an extended exchange between the two, along with host Don Imus:

ALAN COLMES: No, we shouldn't-

MCGUIRK: Because by not saying it is not going to appease anybody-

COLMES: It's not Islam-

MCGUIRK: It's not going to make ISIS chop off one less head-

DON IMUS: And actually, it is Islam-

DON IMUS: No, no – it's a perverted version of that-

COLMES: That means it's not real Islam.

DON IMUS: But the point is, it is Islam. They're citing – they are citing that as a motivation.

COLMES: They can cite anything they want, but that – but that's not accurate-

COLMES: People who kill at abortion clinics in the name of Jesus are not practicing Christianity.

MCGUIRK: Well, it's an extreme form of Christianity-

COLMES: No, it's not! It's not any form of Christianity

Imus's wife, Deirdre, and Colmes had their own face-off later in the segment after she criticized President Obama's "dangerous" foreign policy:

DON IMUS: ...Deirdre, what do you think?

DEIRDRE IMUS: It's being very weak. So, our president is weak around the world, and no one is taking him seriously-

DEIRDRE IMUS: And the fact that he's not able to say these are Islamic radicals or Islamic jihadists, he can't – that won't come out of his mouth?

COLMES: He's got to say the phrase that pays to make you happy?

DEIRDRE IMUS: He has to say what it is!

COLMES: It's not what it is-

DEIRDRE IMUS: Because we are at war with them-

COLMES: George W. Bush did the same thing, by the way-

DEIRDRE IMUS: And the fact that he's in denial is very dangerous-

MCGUIRK: You can't appease them, Alan-

COLMES: It's not a matter of appeasement-

DEIRDRE IMUS: This makes it more dangerous – the fact that he's in denial-

COLMES: No. In fact, it makes it less dangerous, because you're not going after an entire religion-