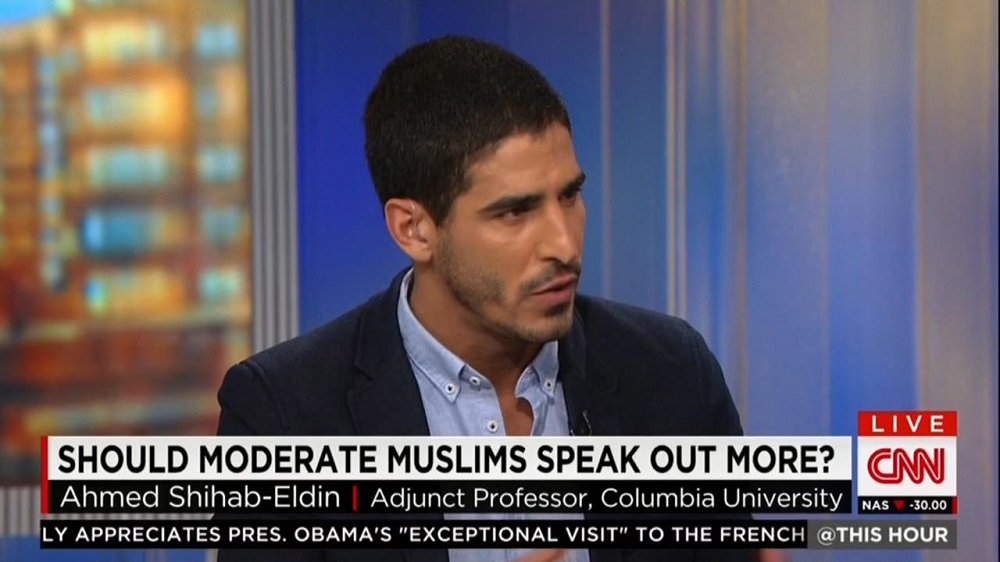 Ahmed Shihab-Eldin attacked Fox News and others on Monday's @ This Hour on CNN for placing "an unfair burden on Islam," particularly in the wake of Islamist terrorist attacks. Shihab-Eldin asserted that those calling on Muslims to condemn terrorism are "not aware of Google; or not paying attention; or perhaps, watching too much Fox News, where hosts constantly are...driving this point home – this us versus them...this point home that Muslims aren't speaking out....I think it's regrettable, and I think, arguably, bigoted." [video below]

Host Michaela Pereira introduced the segment with the former Huffington Post journalist by noting the "nearly four million people crowded into the streets across France yesterday" in response to the recent terrorist attacks in Paris, and "forty leaders from around the world [who] also marched along with them." She continued by pointing out that "some moderate Muslims are speaking out – denouncing violence committed in the name of Islam. But many are asking: should they do more, and what can they do?"

Pereira then turned to Shihab-Eldin and asked, "I think, right off the bat, that crucial question we've been hearing from, sort of, different corners – that moderate Muslims need to be part of this conversation – that [they] have a responsibility – need to be doing more. What are your thoughts on that?" The "Emmy-nominated journalist," as the CNN anchor referred to him, replied with his slam of Fox:

AHMED SHIHAB-ELDIN, EMMY-NOMINATED JOURNALIST: You know, that's often where the conversation goes when these kinds of attacks happen. And I can tell you it's very unsettling – kind of, the stages that you go through as a Muslim or as someone part of that community when these attacks happen – because first, you think, I hope it's not a Muslim. And eventually, you realize that....Muslims of all kinds – moderate Muslims, Muslim leaders – have often condemned these kinds of attacks, and continue to do so today. I just think that certain people aren't listening.

...And so, I think those who are calling for these kinds of – you know, condemnations and denouncements are either – you know, not aware of Google; or not paying attention; or perhaps, watching too much Fox News, where hosts constantly are – you know, driving this point home – this us versus them – you know, this point home that Muslims aren't speaking out. But, you know, again, the bigger question should be, why is it that only Muslims should speak out when these kinds of attacks happen?

Shihab-Eldin also emulated a strategy used by co-religionist Arsalan Iftikhar and liberal professor Steven Fish: playing up a terrorist attack supposedly conducted by a Christian. But instead of the Lord's Resistance Army, the guest cited a 2011 massacre in Norway:

SHIHAB-ELDIN: ...In Norway, for example, when we see – you know, terrorists – a Christian terrorist – you know, kill however many people; or, you know, even in Israel when you see – you know, extremist Jewish settlers kill people, you would immediately say it would be prejudiced to expect all Jews or all Christians to speak out against this. And so, I think – you know, people who make those calls – I think it's regrettable, and I think, arguably, bigoted.

However, the perpetrator of that attack, Anders Behring Breivik, considered himself to be a "cultural Christian," and condemned then-Pope Benedict XVI, as well as Protestant churches. So, just as in the case of the Lord's Resistance Army, Breivik isn't a serious Christian.

Pereira made it clear that she sympathized with her guest when she brought up a Friday segment from CNN Tonight, where New York Times columnist Roger Cohen criticized moderate Muslims:

PEREIRA: Let's go to one extreme example of that. I don't know if you had a chance to see – a New York Times op-ed writer weighed in on this very thing over the weekend. I'm going to get you to listen to this, and we'll get your reaction on the other side. Take a listen.

ROGER COHEN, NEW YORK TIMES OP-ED COLUMNIST (from the January 9, 2015 edition of "CNN Tonight"):  I do hold Muslims responsible to this degree: I don't think that we can solve this problem, Don, until moderate Muslims really speak out – really say, 'This is not our religion. This is not something we can accept. This is absolutely barbaric. This is the murder of innocents. This is an attack on Western democracies and the freedoms we all stand for. And we are now part of these societies. We're living in them.' Until they speak out in that way, I don't think we're going to see much progress, and I think that's a responsibility they have.

PERIRA: So Professor, you hear Roger Cohen say that. But I'm curious – so let's say all Muslims around the world unite and say, we denounce this. That's not going to end the violence of terrorists.

SHIHAB-ELDIN: No, it's most certainly not, and it's important to remember that extremism thrives on extremism. And the reason that I say is – you know, by expecting all moderate Muslims, if you will, to condemn this, it kind of perpetuates this – this framing of – you know, the clash between Islam and the West-

SHIHAB-ELDIN: This kind of perpetual clash – which was, I think – you know, behind the motivation of the attackers themselves. So look, very briefly, I'll say I'm a moderate Muslim, if you will. My name is Ahmed – a name that I share with Prophet Muhammad – but a name that I also share with one of the policemen that was killed-

PEREIRA: That was shot – yes, yes-

SHIHAB-ELDIN: And, you know, when I saw that fact – you know, it really kind of resonated with me. There's a deep and dark kind of irony – a sinister irony behind the fact that these men, who were – you know, trying to avenge – or believe themselves to be avenging – you know, the Prophet Muhammad and his honor – you know, killed a man by the name of the prophet-

SHIHAB-ELDIN: And, you know, I think that really just highlights the fact that there's an unfair burden on – on Islam.

PEREIRA: I'd like you to come back and talk to us more, because there's so many things we can discuss – including some of the Facebook posts that you've been getting some pushback on. You posted a picture of yourself with 'Je suis Charlie,' and you got some – some pushback on that. We don't have time for it today, but can you back another time?

PEREIRA: We'd love that. Professor, thanks for much – really appreciate meeting you.