The liberal media’s favorite unethical and crude comedian is at it again. On the October 2 edition of The Daily Show With Jon Stewart, the Comedy Central host began his monologue with a distasteful joke only a self-proclaimed liberal could get away with. In fact, if any conservative comedian (should he get airtime) had made the same joke, he would have been booed off the set.

After playing a clip of Bill O’Reilly stating that due to the threat of Ebola, “I would absolutely say, for the next few months, nobody from West Africa gets into the United States,” Stewart showed an image of a slave-trade map of the 1700’s and snidely commented, “What a difference in Africa-U.S. travel policy 150 years makes. You know, I have to say that Africans--they would have loved that proposal 200 years ago.”

Stewart mocked the panic over ISIS and Ebola getting into America, since the deaths from those things “can be counted on two Simpsons hands.” (The Foleys and the Sotloffs are supposed to laugh along.)  Americans should dismiss the hyperbolic rhetoric of right-wing politicians and focus on liberals’ favorite prerogatives: controlling food consumption, expanding Medicaid, enforcing gun control, and combatting global warming.

That’s right. According to the Left, the dangers of global warming threaten the lives of more Americans more than the establishment of a terrorist caliphate in the heartland of the Middle East.

The comedian reiterated his ridiculous talking point, that “the government has a sacred obligation to save American lives” which it has not fulfilled. While this “sacred obligation” does not go so far as to protect citizens from terrorists or disease Stewart argued, it does require an expansion of nationalized health care and the restriction of citizen’s rights to choose the food they eat, to exercise their Second Amendment rights, and to live free of excessive global warming mandates.

Jon Stewart and the rest of the liberal media have truly outdone themselves in their attempt to divert attention away from the foreign policy failures of their beloved President Obama. See transcript below:

BILL O’REILLY: I would absolutely say, for the next few months, nobody from West Africa gets into the United States. Sorry.

JON STEWART: Wow. What a difference in Africa-U.S. travel policy 150 years makes. You know, I have to say that Africans--they would have loved that proposal 200 years ago. But the message is clear, whatever it takes, the government has an obligation to do whatever it takes to protect American lives.

SCOTT PELLEY: Heart disease. It is a leading cause of death, killing 600,000 Americans a year.

STEWART: That's like Milwaukee disappearing every year. That's like if you took all the Americans killed by ISIS and Ebola, and added ALMOST 600,000 to it. Surely the federal government, having a scared obligation to do whatever it takes to save American lives. Should take some action to prevent this heart disease. 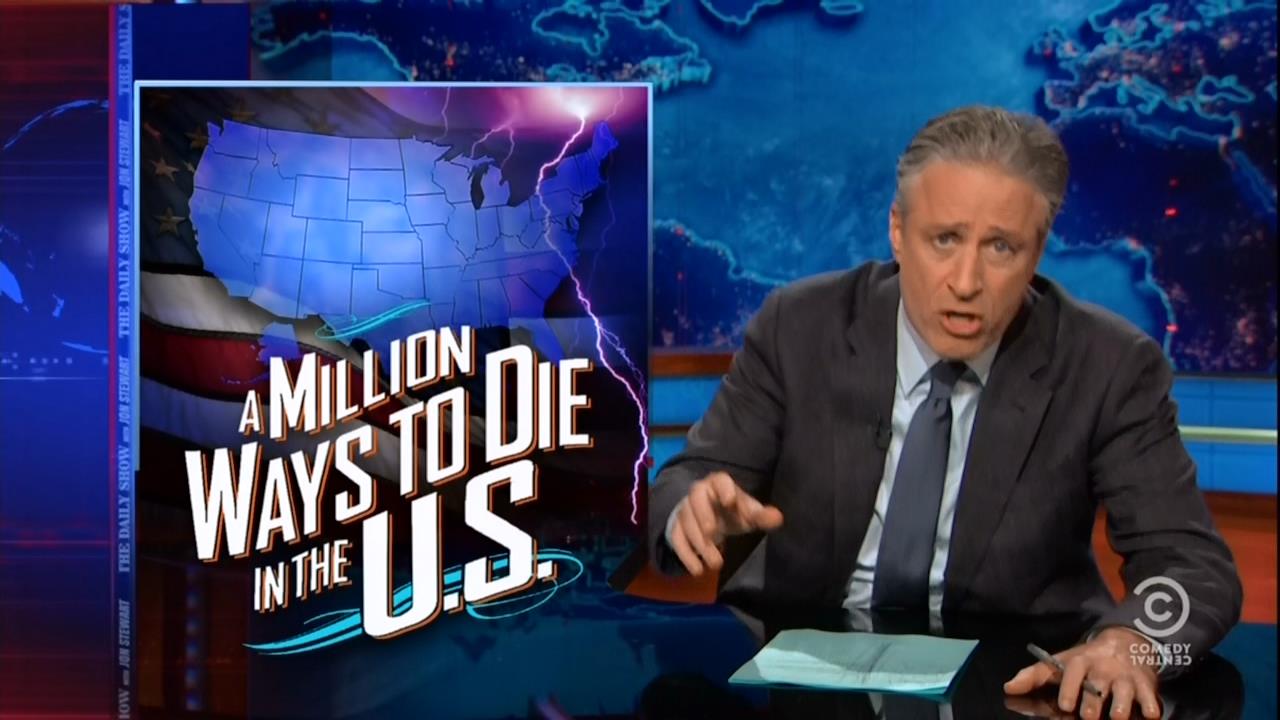 FOX MONTAGE: The government shouldn't be telling us what to eat. Food police!

>> They claim they're being starved by government mandates.

STEWART: Really? We must do whatever it takes to save American lives. Although, if we cannot eat meat at every school lunch, is that really living? All right, fine. Good dietary health is tyranny. Maybe we can save people from post inevitable heart disease. Maybe we can expand Medicaid. That would prevent between 7,000 and 17,000 American deaths per year. Why don't we do that?

GOV. RICK PERRY (R-Texas): To expand this program is not unlike adding a thousand people to the Titanic. You're going to further drive this country into debt.

GOV. NATHAN DEAL (R-Ga): States already struggle to pay the cost of it.

STEWART: The government has a sacred obligation to save American lives above the poverty line! This doesn’t get a lot of attention, but there’s this other thing: America has a lot of gun deaths.

FORMER GOV. MIKE HUCKABEE (R-Ark): The issue is not guns, it's criminals.

SEN ROGER WICKER (R-Miss): It is a job killer. It is based on questionable science.

SEN. JEFF SESSIONS (R-Ala): It is not enough just to say that the danger is great, therefore we are free to demand the nation spend whatever is necessary.

STEWART: That's what you f****** suggest all the time! Did you not see the “whatever it takes” montage from earlier? It's exactly what everyone’s saying. All we keep hearing is we must do whatever it takes to save American lives, unless it's stopping the things that are actually killing Americans.

It's like when the airline says we'll do whatever it takes to ensure you have a comfortable flight, except feed you, or circulate fresh air and give you room to move or keep the passenger in front of you from a drunken s*** on the drink cart. Anyway, please enjoy your complimentary crying baby. Look, for some reason, for some reason, in this country we're only afraid of bad things entering our country, crossing our sacred borders. When our shelves are already so stocked with bad s***, it's like people are saying when I die, I want to know my preventable death has a label on it that says made in America. We'll be right back.