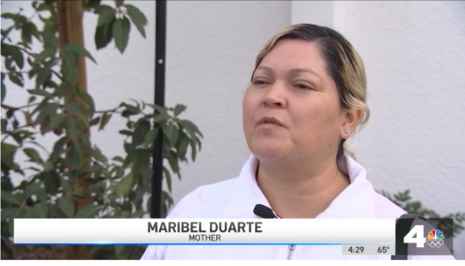 The nation's Spanish-speaking media routinely act as a public relations division for Governor Gavin Newsom (D), assiduously delivering content that promotes the California governor as a protector of Latinos.

However, these same national networks suppressed the news of a Hispanic student that was enticed with pizza, vaccinated without parental consent in a Los Angeles school, then warned to not tell his parents.

The unfavorable bit of news that was swept under the rug by all but Los Angeles affiliate Telemundo 52, involved a 13-year-old student at the Barack Obama Global Prep Academy in South L.A. who, according to the report, brought home a vaccine card after having accepted the COVID-19 shot at school.

The child's mother stated that her son -- who has problems with asthma and allergy problems -- accepted the jab when it was offered in exchange for some pizza.

Per the Telemundo affiliate report, minors in California can't consent to vaccination -- something the person who administered the unauthorized vaccination into the 13-year-old was well aware of. As his mother said on camera: "The lady that gave him the shot and signed the paper told my son, 'Please don't say anything. I don't want to get in trouble.'"

Back in August, California made a big splash with the Machiavellian strategy of making the jab attractive to children by offering free pizza, tacos and even pricey wireless headphones in exchange for the COVID-19 shot.

Call out the bias in the news at the Hispanic media; join the MRC here.