There´s no doubt about it: Hispanics are growing in numbers – and importance – in the U.S.A. Hollywood, in this case HBO, is paying close attention to the 60 million who make up the nation’s largest ethnic minority group. In its first ever Spanish-language programming experiment, the network recently produced a horror comedy called Los Espookys, with Spanish dialogue and English subtitles.

While some claim the series pays homage to Latin American Culture, in reality, Los Espookys goes out of its way to mock many of the things that, in effect, distinguish Hispanics as a social group with unique values and qualities, such as: parental love, respect for elders, religious fervor and yes, a passion for drama.

Set in an imaginary, unnamed Latin American country, Los Epookys, centers on four characters who turn their love of scaring people into a business. The series is written by Fred Armisen, Julio Torres and Ana Fabregas, with the three also appearing as main characters Tico, Andrés and Tati, respectively. The first season consists of six-episodes, and HBO recently confirmed renewal for a second season.

During a scene from the first episode, one cannot help but see parallels between a character called Gregoria Santos – a dramatic journalist (behind the scenes she acts like a zombie) that covers the paranormal, and the anchors of Spanish-language network Estrella TV's newscast where more focus is placed on melodrama than factual news. 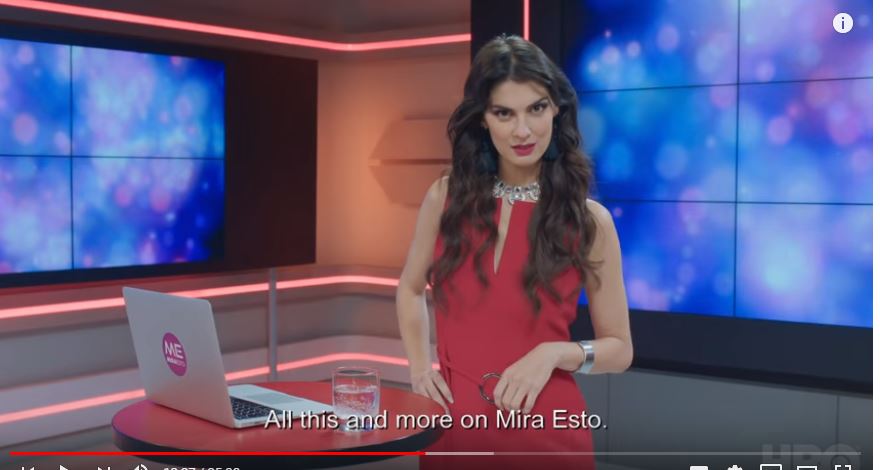 The show's characters each face their own tribulations, not exclusive to Latinos, but certainly depicted in the light of Latin American idiosyncrasy. Tico (Armisen, best known as a cast member on Saturday Night Live from 2002 until 2013), is a valet parking attendant in Los Angeles.

While he is an affable person and loving father, his daughter Sonia treats him with utter disrespect, something to which, contrary to traditional Latino values, he submissively complies with. (Kind of a tip of the hat to the overindulged Millennials Hollywood loves to revere, i.e. Miley Cyrus et al.).

Here is a scene set at the family´s dining room table that highlights Sonia´s insolence towards her good-natured father:

Sonia: Okay, but let's get into it. I'm having a really bad day today. I was at Metro PCS and this woman was talking to me like I'm a bitch.

Sonia: Oh, I see. Even my own father is going to treat me like a bitch.

Sonia: Don't sweetie me like I´m one of your side bitches.

Tico: My what? Sonia, sweetie, nobody is calling you a bitch. And if you feel this way, well, that is not my intention, I apologize.

Renaldo (Bernardo Velasco) plays the leader of Los Espookys, a typical 20-something Hispanic who still lives with his (in this case, dog-obsessed) mother. Renaldo is the eternally broke Latino asking his friends for food and even their cell phones, since he never has any minutes left to use on his; his best friend, however, is the heir of a chocolate fortune – Andrés (Julio Torres), who nonetheless belittles his buddy whenever possible, such as when he only offers a hungry Renaldo chocolate in one of the show´s scenes, an anomaly to the normally generous Latinos, especially when it comes to food.

Andrés, the show's LGBT stereotype –oddly portrayed as weird misfit – is a blue-haired, dark persona, adopted by a wealthy family who owns a chocolate empire. Andrés is about to marry his narcissistic boyfriend (again Los Espookys centers on the negative), pushed by his vain parents to unite two powerful families. The eccentric character is always unsuccessfully seeking to find out who his biological parents were, as to confirm if his weirdness comes from them.

His friends, however, couldn´t care less about his case:

Andrés:  I was found as a baby at the steps of the orphanage, amidst a thunderstorm…

Andrés: When the nuns found me they said: This child is not like the others… he´s different. When Father Francisco gave me to my parents he said, "beware of this child. There´s something mysterious inside of him, something dark."

(The friends just go on about their things.)

Tati, played by co-producer and writer Ana Fabregas, is an “indestructible” space-cadet unable to keep jobs for long and willing to live a senseless life.

The fourth member of Los Espookys is Úrsula (Cassandra Ciangherotti), a miserable dental assistant (apparently a lesbian) who happens to be the brain behind the group´s special-effects gimmicks.

Another snub to Hispanics who believe faith is more than an act of vanity or pretense, is Padre Francisco, a middle-aged scheming priest who is envious of a new, younger priest that recently arrived at his parish and everyone seems to love. His solution to being wanted and loved by his congregation once again? Staging an exorcism that would show off his special powers with the dark.

(At a meeting with Los Espookys at Father Francisco´s office to plan an exorcism as a way to bring back his popularity):

Father Francisco: Business isn´t going so well. There's a new priest here at Santo de la Guardia, Father Antonio Valenzuela. He's pious, young and hot. Ever since he arrived, everyone asks him for all sorts of favors. They want him to lead prayers, to baptize their babies. I feel like my role here isn´t important anymore, like no one needs me. Also, his lips are so glossy. Too glossy.

Exorcisms are on the decline. They´re sort of a boutique request nowadays. So I thought, if I performed an exorcism, I’d be a star, and Father Antonio would lose the spotlight. I would be much more famous.

All in all, Los Espookys ends up being just like the reality novelas the show lampoons, minus the overly made-up female protagonists, innocent waifs, mustached, macho landlords and yes, the loving family priest. The show ultimately mocks the culture it claims to portray, and HBO is complicit in that mockery.