Here's something you don't see every day: CNN En Español took time from their report on the latest brutal poll of the Biden administration in order to acknowledge the work of MRC Latino.

Here's the full report as aired on Directo USA on Thursday, and be sure to watch to the end:

JUAN CARLOS LOPEZ, CNN: President Biden today in Virginia- part of his efforts to promote his economic agenda. But a new CNN poll is not very favorable to the President of the United States. Let's go to the results of some of the questions asked in this poll taken between January 10th and February 6th. The margin of error is 3.3%. Biden's performance as president- just 41% approve, but 58% disapprove of his performance in this question- the margin of error is 3.5...3.3%. What are the issues that lead poll respondents to approve or disapprove? 46% approve of his efforts to defend democracy, on education- 46, on coronavirus- 45, the relationship with China- 42, with Russia, 42%, on helping the middle class- 41%, on crime- the fight against crime- 40%, and on what hurts people the most, their pockets- just 37% approve of the president's performance. How did the approval rating break down among the different ethnic groups in the United States? Well, let's see what the poll says. Biden's approval rating is at 32% among whites. It's at 69% among Blacks, and among Latinos it is at a 51% approval of the President of the United States- figures that should please our friends at MRC, who always keep an eye on what we do.

It must've been painful for López to deliver this poll, hence that throwaway line about our prospective enjoyment of those figures, delivered with a sneer.

Nonetheless, it goes to show the impact of MRC Latino. And although we appreciate the shoutout, we'd be neglectful in our duties if we didn't point out that López omitted the most damning figure of the CNN poll, which aired on the network's flagship station: the one where 56% of respondents said "nothing" when asked if Biden has done anything that they approved of. 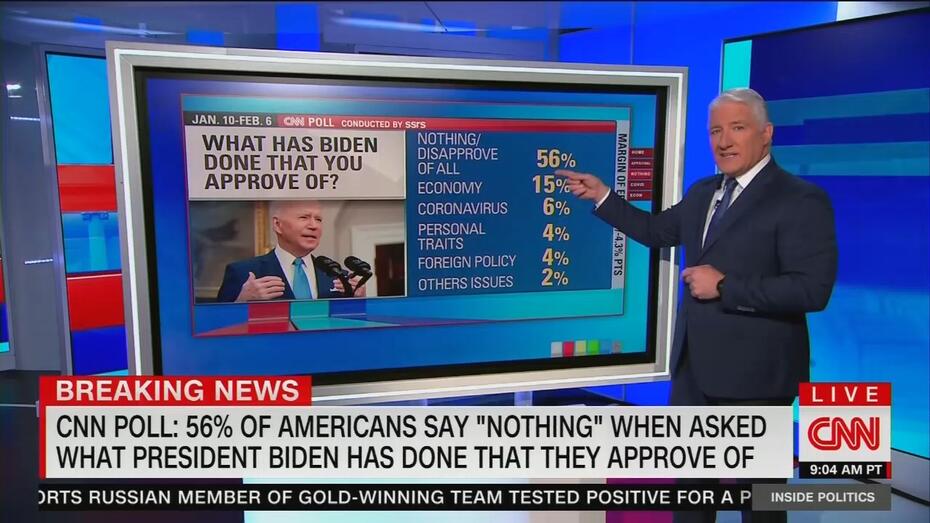 We are, in fact, always watching.