AGAIN: Politico Freaks Out Over Kamala Criticism On Spanish-Language Miami AM Radio 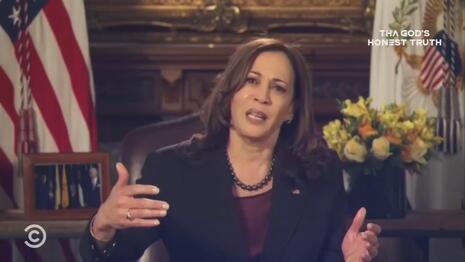 The story itself seems to be constructed entirely upon a December 13th tweet from prominent Democratic consultant and MSNBC regular Fernand Amandi, in which he denounced an apparent “pro-active, clearly organized effort to demonize and malign the image + reputation of (Vice President Kamala Harris) on Spanish-language radio in South Florida.”

Although its authors admit in the eighth paragraph that “there is no definitive proof of a coordinated campaign attacking Harris on South Florida radio,” they nonetheless used those claims as the basis of this weirdly-timed story from which several takeaways emerge.

First, the story leveraged the alleged anti-Kamala conspiracy into a call to build a defensive encirclement around the beleaguered Vice President ahead of 2024. Readers of this byline will recall the “Daughter of Immigrants” op that was run by corporate Latino media ahead of the 2020 election, crafted in an attempt to make Harris palatable to Hispanics nationally.

As a result of this latest Politico item, you can expect a surge of positive fluff pieces on Harris that are specifically crafted so as to build a commonality with Hispanics for consumption outside of her California comfort zone. No one should be shocked if Univision or Telemundo attempts to perform a hard reset on Harris ahead of the midterms and 2024.

In many ways, this is lingering fallout from the 2020 presidential election. President Donald Trump's improved performance with Hispanics was attributed, in large part, to "Spanish-language" disinformation, and the first year of Biden's term has seen that Trump overperformance grow into significant disapproval among Hispanics.

Conservative Spanish-language talk radio in Miami remains the one ecosystem not under the control of the left and its corporate media. Items that Univision and Telemundo may suppress or otherwise omit (for example, Harris’ catastrophically bad polling and the media’s hyping of Transportation Secretary Pete Buttigieg’s over Harris as a potential Biden successor) will absolutely coverage on Miami’s AM dial.

As the Biden-Harris administration continues to struggle with such things as COVID, passing its agenda, crime, education, and immigration, critical coverage can be expected to intensify on Spanish-language talk radio in Miami. So, too, will the pace of stories such as Politico's.

Join the MRC in calling out the bias in Spanish-speaking media. Follow this link.