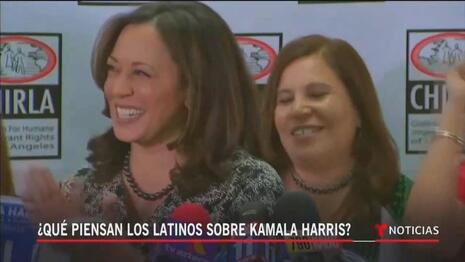 Extra Extra! Forget the “Person of Color” card for Kamala Harris. No. At the nation´s Hispanic networks, the California senator and VP pick for Biden is now some kind of Messiah for the nation's immigrants, being as she is, “the daughter of immigrants” herself.

The immigrant card, however, didn´t originate from the networks themselves, but rather as talking points pushed by the real producers of content at Univision, Telemundo, Estrella TV and CNN en Español: leftist PACs like Latino Victory which are wholly invested in advancing their political agendas.

Since choosing Harris as Biden´s running mate, the networks have inserted the “daughter of immigrants” mantra into related coverage, while completely omitting her atrocious record terrorizing Black AND Latino communities while working as a prosecutor in Alameda County, as District Attorney in San Francisco, and as the Attorney General of California.

Watch as the “Daughter of Immigrants” narrative takes over the Latino liberal nets:

JANET RODRIGUEZ: The California senator is the daughter of immigrants

EDWIN PITTI: being the daughter of immigrants

SARASSA: and as the daughter of immigrants

NICOLE SUÁREZ: And as we mentioned, a woman and daughter of immigrants

JAVIER VEGA: and that is the daughter of immigrants

FRANCISCO CUEVAS: and who can identify with her story due to her being the daughter of immigrants

JUAN CARLOS LOPEZ: This senator is also the daughter of an Indian mother and of a Black father

NAVARRO: I love that she’s the daughter of immigrants

These mentions of Harris’ life story, intended to uplift and evoke memories of Obama’s “Coalition of the Ascendant”, are not at all organic. Just ahead of the Harris rollout, Latino Victory president Leopoldo Martínez Lucete wrote a ham-handed opinion piece for Univision that laid the groundwork for a narrative meant to leverage Harris’ story, creating an artificial Latino favorability where none exists.

The brand of the very charismatic Harris is linked to the struggle for penal and prison system reform for the purpose of eliminating the injustices and vestiges of systemic racism, also the eradication of police violence, which affects vulnerable communities as well as ethnic minorities- especially African Americans and Latinos. Without a double, she is a national authority on social issues and health care reform, but makes her economic arguments in such a manner so as not to trigger rejection from the business community.

But there is an element of Joe Biden’s decision worth pointing out. Kamala Harris is the daughter of a family of immigrants. Her defense of The American Dream broadens the Democratic candidate’s vision with regards to the importance we immigrants have as part of the American social fabric.

Kamala Harris’ history and trajectory inspire millions of (our) families that came to the United States to build a dignified future, achieve happiness and develop the potential that for different reasons was denied to us in our countries of origin.

That rhetoric does very little to persuade those who are familiar with Kamala Harris´ abusive trajectory and “lock-´em-up” history. Worse yet, her being the daughter of immigrants has no bearing at all for Latinos who witnessed her track record arresting Blacks and Latinos. Given this gushy rollout, we are left to wonder when, if at all, the nets will examine Harris’ record of incarcerations, and malicious prosecution of independent journalists such as David Daleiden of the Center for Medical Progress- also things that immigrants fled in order by coming to the United States.

Who enables the nets misinformation? Target, for one. Let them know here.