Jorge Ramos' Cronkite Award Is Not For His Journalism, But For His Activism 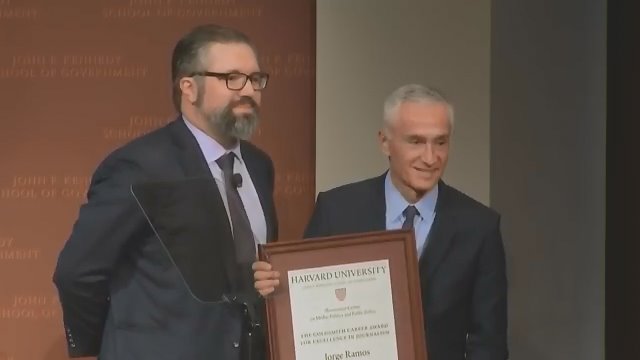 In the upside down world of American journalism, Jorge Ramos has now received the Walter Cronkite Award for Excellence in Political Journalism. The circumstances for which Ramos is being honored suggests that the award is more accurately bestowed for political theater and activism than for political journalism. And that is truly unfortunate.

There is an ample body of actual journalistic work that Jorge Ramos has accrued in over three decades behind Univision's anchor desk - particularly, his tough, unblinking interviews of dictators such as the late Hugo Chávez. But his denunciations of Latin American tyrants such as Venezuela's Chávez and Cuba's Fidel Castro didn't seem to warrant the attention of America's liberal media elite. That body of work went unrecognized, and continued to go unrecognized until Ramos began to show a domestic partisan streak. Here is an early inkling, from 2010:

That quote accurately reflects the full scope of Ramos' biases and activism; not just on immigration but on other issues, for example: Ramos' open call for repeal of the Second Amendment. And then came Ramos' breakaway performance during the 2016 election.

To be clear, Ramos is being honored for going to Iowa and stage-managing his ejection from a Donald Trump press conference, doing all sorts of media about the cataclysmic effects of his stage-managed ejection, and then taking a stridently anti-Trump stance going forward which, subsequently, built a permission structure for the rest of the Acela media to retreat into its bubble and also take a side during the election. This, explicitly, is the basis for Ramos' acclaim throughout elite establishment media and academia...and it's not just USC Annenberg.

Speaking of media bubbles, listen to this fascinating quote from Ramos as he receives the Goldsmith Award at Harvard University, and where he hardly sounds deserving of winning any kind of award for his 2016 election performance as a journalist.

JORGE RAMOS, SENIOR NEWS ANCHOR, UNIVISION: Look, as journalists, we made many mistakes before the election. We didn’t see it coming. We made a mistake. I made a mistake. I thought that, for instance, that Latinos could define an election. That was not the case.

We didn’t see that 29 percent of Latinos were going to vote for him. We didn’t see the resentment that was growing in the white non-Hispanic population in other areas, in Wisconsin, Michigan, Pennsylvania. We didn’t see it. So, as journalists, we’re supposed to report reality as it is, but we were not seeing reality. So I think we have to admit first that we have to be much more open to listening to other groups, and to other people.

This Univision bubble is even more fascinating because Ramos had access to diverging opinion from the renowned Radio Mambí, inside his own building. Ramos wasn't far from the reality, and yet he chose to ignore it in order to keep pushing his own agenda and political narrative upon his audience. The fact is that Latinos did have a hand in swinging the election, just not in the way that Ramos and practically everyone else at Univision sold to their audience.

What's most galling is Ramos' reaction to this marketplace rejection and loss of credibility in the wake of the 2016 election. Instead of being chastened, Ramos lashed out at his audience, by imposing an assumption that immigrants and their descendants are duty-bound to support open-borders policies. Here he is, again, at Harvard:

RAMOS: ...for me, it’s incredibly sad, and I face that reality almost every single day—when an immigrant, or the son of an immigrant, or the grandson of an immigrant decides to turn his back or her back to the immigrants who came after him. And we don’t have to look beyond Donald Trump. He’s the son of a Scottish mother. His grandfather was German. And he decides that it doesn’t matter what’s going to happen with those who came after him.

It bears noting that Ramos' tone was conciliatory here, framing his dogma in terms of the sadness he felt. But Ramos struck a different tone when cheering the respective primary defeats of Ted Cruz and Marco Rubio, suggesting that they were race-traitors who had to come crawling for forgiveness. Ramos struck this same tone, indicting Hispanics who voted for Trump, when calling into the Carmen Aristegui show out of Mexico immediately following the election:

RAMOS: I don't know what numbers you are looking at, Carmen, I've heard- but there's still some missing- that he could have attained 30% (of the Latino vote).

RAMOS: This greatly surprised me, because Romney, with his 27%, lost four years ago. The only way to explain it is (that) immigrants or the children of immigrants that forgot their origins...

This is the behavior that USC Annenberg has deliberately chosen to honor - ugly, racialist political activism - by bestowing its Walter Cronkite Award upon Jorge Ramos. Not journalism. That such behavior would be honored as journalism is a telling indication of the profound disconnect that exists between the industry and the American people (Hispanics, too), as well as an indictment of our nation's elite media.