Jorge Ramos Must Clarify 'Our Country' Tirade, Disavow, Or Apologize

Jorge Ramos' tirade at the 2017 edition of Univision's annual entertainment awards show raised more questions than it answered. And the time has come for one of the nation's leading television anchor-activists to answer those questions.

JORGE RAMOS, SENIOR NEWS ANCHOR, UNIVISION: I am an immigrant, just like many of you. I am a proud Latino immigrant here in the United States. My name is Jorge Ramos, and I work at Univision and at the Fusion network. And you know exactly what is going on here in the United States. There are many people who do not want us to be here, and who want to create a wall in order to separate us. But you know what? This is also our country. Let me repeat this: OUR country, not theirs. It is our country. And we are not going to leave. We are nearly 60 million Latinos in the United States. And thanks to US, the United States eats, grows and, as we've seen today, sings and dances. So when they attack us, we already know what we are going to do. We are not going to sit down. We will not shut up. And we will not leave. That is what we are going to do. 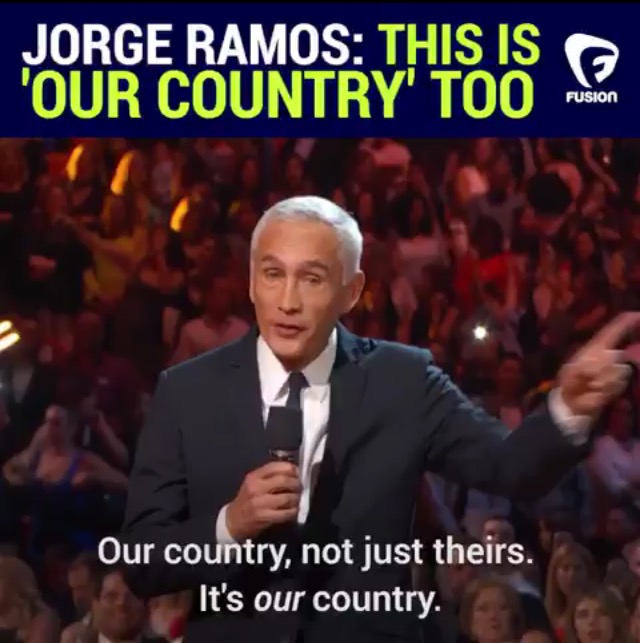 In addition, Ramos' body language is not at all inclusive. Notice his hand gesture as he encompasses himself within "our country" and then figuratively points at those he identifies as not having a claim on the country when he declares it "not theirs."

It should be noted that this is not the first time that Univision entities are caught deliberately and deceptively softening up a translation for publication in English. In fact, this has been happening quite often; most notably when Ramos' expressly anti-Catholic statements were excised from an opinion column prior to circulation on Fusion.

Of course, the main difference between then and now is that the anti-Catholic statement ran in a filler column that got lost over the Christmas holidays, whereas we now have a rapidly-spreading video of Ramos' Premios Lo Nuestro rant.

As of yet, no effort has been made on Univision's part to correct the error, which begs the question: was this simply another bad translation? Or was it a willful, deceptive mistranslation intended to diminish the stridency of Jorge Ramos' remarks before English-speaking audiences? Ultimately, no one can answer these questions except for Jorge Ramos himself.

Did Ramos just botch his speech, intending to say the more inclusive "our country also" the second time? Then he should clarify his remarks, and disavow the translation currently making its way through social media. Or did Ramos actually intend to say the clearly divisive "our country, not theirs" all along? If that is the case, he should apologize for making such a brazenly divisive statement - which only serves to hurt, not help, bring about the U.S. immigration law reforms for which he so ceaselessly advocates.

Finally, if Ramos did indeed deliberately intend to say "our country, not theirs", then the record will reflect that Univision must also join Ramos in apologizing for the willful and blatant dissemination of verifiably fake news in a manner that starkly reflects unconscionable arrogance, recklessness and a wanton disregard for the intelligence of viewers.