Jorge Ramos Lost All His Credibility And Learned Nothing 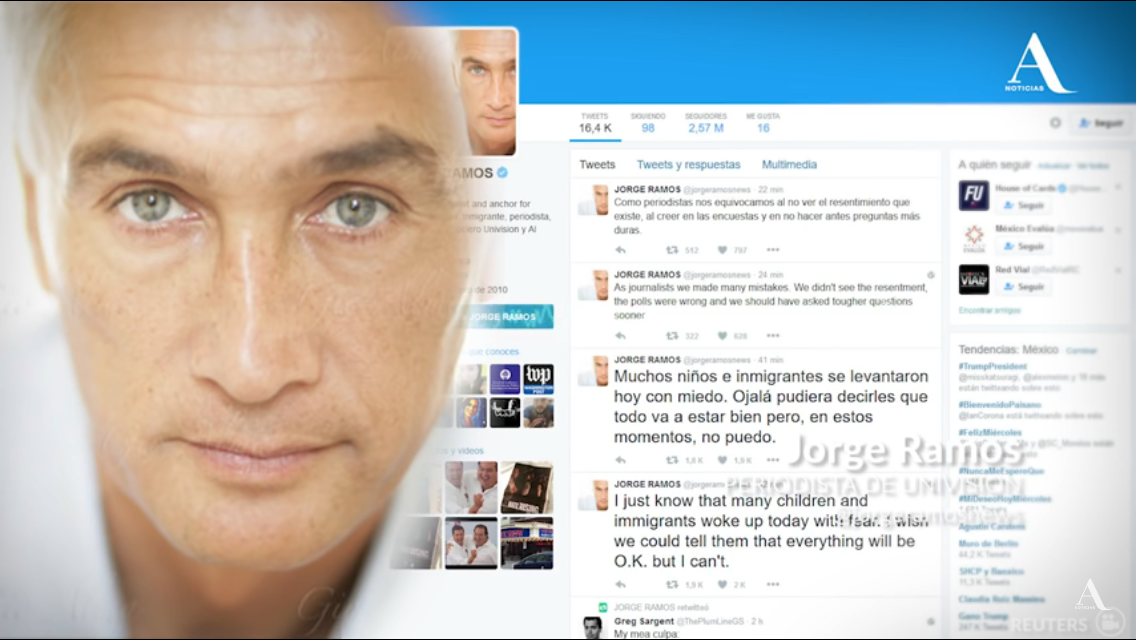 As we mentioned earlier, no media outlet had a bigger stake in this presidential election (and lost more resoundingly) than Univision. On an individual basis, there is no larger loser than the network's star anchor Jorge Ramos.

In fairness, Jorge Ramos was an activist with press credentials long before  Donald J. Trump arrived on the 2016 presidential scene. But this campaign cycle has exposed Ramos as never before. One would think that Ramos would show some contrition after everything that he got wrong over the course of the last eighteen months, but if his wrap-up of Univision's Election Night coverage is any indication, then contrition is a long way away:

JORGE RAMOS, CHIEF NEWS ANCHOR, UNIVISION: And with respect to the journalism we have been practicing in recent years, our job, my job, is to ask questions. And I will continue asking questions. And I believe a journalist's place is not to be allied with the powers that be. And like never before now it will become clear, that we are not allied with the powers that be.

MARIA ELENA SALINAS, CO-ANCHOR, UNIVISION: Exactly. Power has to be challenged. And we want to take this opportunity to thank the entire team that has accompanied us.

Over the course of the last week, Ramos has gone on to define what it means to "be against power". The word that he has used in Spanish is "contrapoder", which literally translates to "in opposition to power", and best translates to everyday English as "anti-establishment".

The thing about declaring yourself "antiestablishment" in the wake of an electoral loss is that it implies a prior relationship -or comfort level at a minimum- with the power that was just defeated. Ramos further confirms this in a fascinating post-Election Day interview with Mexican journalist Carmen Aristegui. In fact, here are several transcript snippets that confirm pretty much everything we've written about Ramos up to this point:

CARMEN ARISTEGUI: Hillary Clinton, Jorge Ramos...what do you say about her? She wasn't up to (the task), how would you define a campaign such as Hillary's that ultimately could not manage to defeat a character like Trump?

JORGE RAMOS, UNIVISION ANCHOR: Well, um, they were even more wrong than we were.

JORGE RAMOS, UNIVISION ANCHOR: Their polling. Well, because they thought that they were going to win. Because they believed that their candidate, in spite of all her mistakes, was going to be able to win. Um, we now have to give a little more weight to what the Director of the FBI did, that obviously had an impact...more weight has to be given to the erasure of 30,000 emails- people no longer believed her, people had serious doubts about her, and the wrong calculation was to believe that her lack of credibility was going to be less important than the racism and sexism of Donald Trump. In the end, people voted for change. People voted for the non-politician...for the outsider. And- and Hillary Clinton is, if there exists such a thing as an institutional, typical, traditional politician, that's her. In other words, she comes from a group with power, from the Clintons, and she is a politician that reflected the status quo. Well, Americans got up yesterday and said, "we don't want any more of that status quo".

CARMEN ARISTEGUI: Jorge Ramos, we bring this encounter (with you) to a close by asking about the counterweights. A figure such as this- with a Republican congress and what this formal distribution of power might entail- requires, as never (before), counterweights. The role of the press, the role of journalists, someone like you who has had his own...let's call them complicated situations with Donald Trump himself...so sui generis within a democracy as that scene you had to go through...of a bodyguard that removed you from a press conference...and even if you did return, that image endured as one of the moments (that are) most illustrative of who Donald Trump is...regarding freedom of expression, the press, criticism, and (of) those who think different than him. What does Jorge Ramos say at such a time as this, of the role he has to play...to intellectuals, to academia, to the press, and to journalists?

JORGE RAMOS, UNIVISION ANCHOR: I believe that...and I don't have to tell you this because you've taught us what to do in the face of adversity and in the face of abuses of power, no? So our role as journalists is to be in opposition. The closer you are to power, the more dangerous (it is). And our role continues to be to question those in power, to question those that want to come to power, to ask the uncomfortable questions, and to be on the other side. When we begin to get close to (cozy with) power, we are in the wrong. Our place is not within the red circle, but rather always outside of the red circle. and asking questions. I believe that if we ask questions, Carmen, if we question, we will not be wrong. That is our role, and on a journalistic level. I haven't the slightest doubt that I'll have to be an opposition journalist, and that's it. Done. And now, politically, I believe that we are...a leader is wanted. Politically, the Democratic Party is in search of leadership that can confront Donald Trump because it is now clear the old guard of the Democratic Party didn't work out. and there are no leaders. They all- where are the young leaders of the Democratic Party? Who is going to be that opposition? Who is going to be that opposition figure that will face Hillary Clinton? We don't have that right now over here. And that is grave because the Democrats did not prepare, but...but I believe that we are a few months away from seeing who emerges as the main opposition leader in the United States, and there isn't...I don't see it right now. Imagine, I'd love to give you a list with ten names, but I can't even come up with one right now.

JORGE RAMOS, UNIVISION ANCHOR: I don't know what numbers you are looking at, Carmen, I've heard- but there's still some missing- that he could have attained 30% (of the Latino vote).

JORGE RAMOS, UNIVISION ANCHOR: This greatly surprised me, because Romney, with his 27%, lost four years ago. The only way to explain it is (that) immigrants or the children of immigrants that forgot their origins, and then, of course, you have to be very honest here. There is a part of the United States that is hurt, a white part of the United States that accuses us, as always, every time there are security and economic problems, that blame us immigrants- those that come from somewhere else- of the country's main problems. There is a part of the United States that believes that immigrants, foreigners are to blame for their- for their lost jobs, for the fact that salaries haven't increased as they expected, for increases in (the cost of) their healthcare insurance, and they're extracting a price. So I believe it is those two parts. A real economic situation where people feel that they are not improving, that they feel their jobs are being taken from them- and on the other hand, this misunderstanding of blaming the outsider for the problems of those that are on the inside.

After dividing Latinos against each other and against the rest of the population en route to claiming them for Democrats and for Hillary Clinton, Ramos had to stare into the abyss of his Election Night humiliation and admit that he was wrong. In so doing, he obtusely triples down on the things that led to his embarrassing defeat.

First, there's the continued bigotry expressed against Latinos who don't think like him (In case you didn't know, "Latinos...who forgot their origins" is vintage Ramos code for "race-traitor"). Second, there is an admission of a flaming double-standard when it came to Hillary Clinton. Ramos violated his own code of ethics by giving greater weight to Trump's parade of politically incorrect statements than to Clinton's grotesque corruption. The rest of his response seems to confirm open partisan intent then and going forward, as suggested by all that "we" stuff when talking about the opposition and about being an opposition journalist.

Some time ago, Ramos admitted that he understood the risks to his credibility by taking such open stances. 2016 will be remembered as the year that Jorge Ramos gambled away his credibility. America, however, is about second chances and redemption. Here's hoping that Ramos -as well as the rest of the media- acknowledges the scope and breadth of his failings and strives to hold all sides accountable going forward. This is certainly a much more constructive endeavor than the current lashing-out we've seen so far.