Viewers of Friday's Noticiero Univision were treated to a prime example of bias by omission when the network reported only one side of the ongoing email controversy between former Secretaries of State Hillary Clinton and Colin Powell. By now no one should be surprised as to which side of the story was the one that actually got Univision air.

Here is the report in its entirety:

MARIA ELENA SALINAS, ANCHOR, UNIVISION: Democratic presidential candidate Hillary Clinton told the FBI that her predecessor Colin Powell was the one who suggested she use a private e-mail account during her tenure as Secretary of State. The New York Times said today that this statement was included within the notes that the FBI submitted to Congress this week, detailing the interview that this investigative agency had with Clinton in the month of June.

Anyone who took this story at face value could have reasonably concluded that Hillary Clinton's actions in establishing a private email server were totally legitimate, and that she acted in good faith based on the recommendations of General Powell. Except that Powell immediately pushed back on the story early that same morning, nearly 17 hours before Noticiero Univision aired. MSNBC's Andrea Mitchell tweeted out the initial pushback, and per the Free Beacon, NBC White House correspondent Kristen Welker read this portion of the Powell statement on-air:

General Powell has no recollection of the dinner conversation. He did write former Secretary Clinton an email memo describing his use of his personal AOL email account for unclassified messages and how it vastly improved communications within the State Department. At the time, there was no equivalent system within the department. He used a secure state computer on his desk to manage classified information. The general no longer has the email he sent to former Secretary Clinton.

Of course, Noticiero Univision could not find another 10 seconds to plug this quote into the 30-second blurb on Hillary's e-mails because that would have... 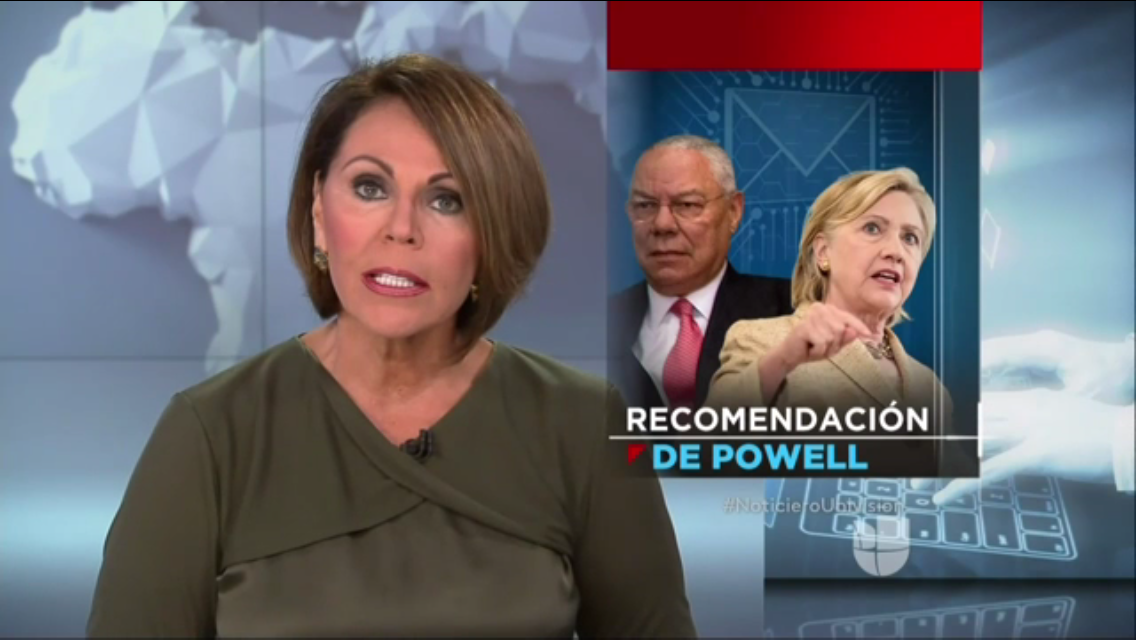 What's worse, the story ran on a Friday- which effectively froze it in place. Univision's weekend newscasts run their own pieces with heavy input from affiliates, so by the time Monday rolled around the newscasts were consumed with whether El Chapo's son was freed by his kidnappers, with Mexican president Peña Nieto's plagiarism scandal (which, by the way, does this not confirm that Univision is in fact tougher on Peña Nieto than on Hillary?), and with whether or not Trump's moves on immigration are legit.

When people question whether Univision is a legitimate news organization or a liberal special interest dedicated to (and dependent on) the continued election of Democrats, they will point to blindingly obvious bias-by-omission stories such as this one.

The biggest loser in all of this are the communities that sincerely trust Univision for news coverage and analysis- and in the end are rendered political pawns to be spun about. They certainly deserve much better than what they are getting from the network.