What's Next For Univision After Disney Fusion Dump?

Univision has officially run out of Disney money to burn, as reported by our very own Daniel Garza. Here are four things to watch for now that Univision is absorbing Fusion into the newly-formed Fusion Media Group:

Fusion Unleashed: Deep in the L.A. Times' writeup of the split is this very interesting and telling nugget:

The Fusion cable TV channel and its edgy website also took on a political tone that made some executives inside Disney uncomfortable, according to two people familiar with the matter who asked not to be identified discussing internal matters.

Unencumbered by meddlesome Disney executives, Fusion will now be free to pursue the purest expression of its true ideological self. Nando Vila can now tell us what he really feels about Justice Scalia's death, constrained only by the whims of his heart and by Isaac Lee's Nazi Rule. Fusion editors and translators no longer have to worry about bleaching the stridency out of Jorge Ramos' Spanish-language columns. However, Fusion may still need to resist the urge to go fuller Hipster SJW, because...

...there's still an IPO pending. Per Bloomberg, Univision is targeting its long-delayed initial public offering for the second half of this year, subject to "better market conditions" (in the alternative, it is expected that Televisa will up its stake to 30%). To be clear, "better market conditions" means substantially increasing their cable footprint and getting their hands on some of that sweet, sweet basic bundle money. But that didn't exactly guarantee success for Al-Jazeera America, which begs the next question:

Can Univision pivot? Now that Univision is on the hook for the entirety of the Fusion Media Group, can the network position itself to offer more inclusive programming that appeals to a broader spectrum of viewers? Will the news division insist on fanning the flames of racial animus wherever and whenever possible, or can there be a willingness to allow its viewers to be the finders of fact? Can Fusion be more inclusive, or will it remain on the outermost fringes of the far-left? The jury is still out on Univision's other digital properties, as well as El Rey (which, by the way, is the network's shining crown jewel on the strength of its programming- action series, kung-fu flicks and Lucha Underground). If Univision doesn't pivot and bring FMG up to speed... 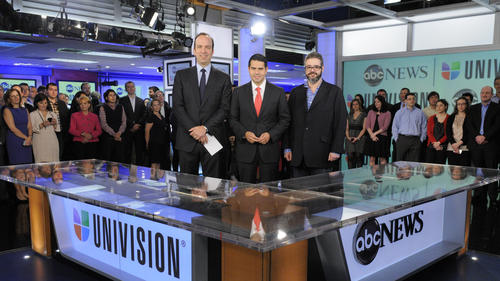 ...is Isaac Lee on the clock? Fusion Media Group and Chief News Officer Isaac Lee is the architect of much of Univision's recent history...from the news division's adoption of aggressive tactics (most notably, its 2011 prosecution of Marco Rubio) to the inception of Fusion, to the scramble towards digital. All of it bears Isaac Lee's imprimatur. Now that Disney's out of the picture, Univision carries all of the risk. Does Univision ownership tighten Lee's leash going forward, or does he still have time to execute his grand plan?

Time will tell. In the meantime, we'll be watching.