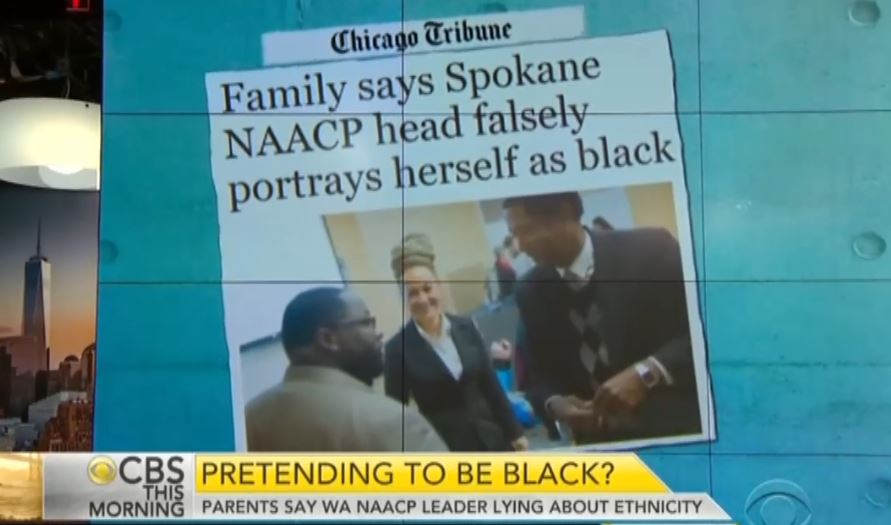 While all three broadcast networks hailed Bruce Jenner for choosing to switch genders and become Caitlyn Jenner just one week ago – devoting 48 minutes to the story in three days – on Friday, those same networks were aghast that Spokane, Washington NAACP leader Rachel Dolezal had chosen to identify herself as black despite being white.

On the June 2 Today, co-host Savannah Guthrie gushed over Bruce Jenner coming out as transgender: “You almost get the sense that Caitlyn [Jenner] is euphoric to be free.” In sharp contrast, she led Friday’s program with a very different attitude toward Dolezal: “Who are you? A prominent NAACP leader under fire, accused by her own family of lying about being black...”

On June 2, CBS This Morning co-host Norah O’Donnell proclaimed: “The world is getting to know Caitlyn Jenner this morning....Michelle Miller shows us how Jenner’s public transition marks an important cultural milestone for the transgender community.” On Friday, fellow co-host Gayle King said of Dolezal: “A civil rights leader in Washington state is embroiled in a bizarre race controversy. This morning the woman who leads the Spokane chapter of the NAACP is being accused of falsely portraying herself as black.”

ABC’s Good Morning America on June 2 began with co-host Robin Roberts hailing: “‘I'm free.’ Caitlyn Jenner stepping out for the first time. New details on the successful transition of the Olympic champion.”  However, in a news brief on Friday, anchor Amy Robach declared: “And a controversy in Washington State involving the head of a local NAACP, accused of misrepresenting her race. Rachel Dolezal claims she's African-American but her family says she was born to white parents and has been lying about her race for years.”

None of the network hosts or reporters ever described Jenner’s decision as “bizarre” or suggested he was “lying” about his gender or “misrepresenting” himself as a woman, but when it came to Dolezal being dishonest about her race, the press jumped on the story as a “controversy” and a scandal.

Friday’s Today and This Morning each offered full 3-minute reports on Dolezal. Both morning shows highlighted Dolezal’s white parents revealing their daughter’s lie. On Today, a soundbite ran of mother Ruthanne Dolezal: “She wants to recreate reality. She wants to just invent it herself....She knows it's false. But I think she’s told herself, as well as she’s told others, this erroneous identity of hers enough that by now she may believe it more than she believes the truth.”

Correspondent Sheinelle Jones even touted social media criticism: “The story quickly went viral, trending worldwide on Twitter overnight, many asking for Dolezal to be removed from her job, saying, ‘Don't talk to me about how #RachelDolezal understood/knew the black struggle when she could pick & choose when to be ‘black.’”

On This Morning, Ruthanne Dolezal explained: “Our daughter is primarily German and Czech and of European descent....Rachel has wanted to be someone she’s not. She’s chosen not to just be herself, but to represent herself as an African-American woman or a biracial person.”

Apparently in the eyes of media, one can choose to change a physical characteristic as long as it’s acceptable to liberal sensibilities.