NBC & ABC Censor Charlie Hebdo Cover, But Tout it As 'Declaration of Defiance'

Reporting on the release of Charlie Hebdo's first issue since the January 7 terrorist attack, NBC's Today and ABC's Good Morning America on Wednesday refused to show the cover of the satirical magazine that depicted a cartoon image of Mohamed. Despite such censorship, both networks touted the publication as "a triumph for free speech" and "a kind of declaration of defiance against terror."

On Today, co-host Matt Lauer proclaimed: "...a defiant Charlie Hebdo releases its very first issue since that terror attack on its Paris offices, with a cartoon of the Prophet Mohamed on the cover." Correspondent Bill Neely began his report: "Today Charlie Hebdo is back on the street, seemingly stronger than ever." However, moments later he explained: "On its cover, which NBC News is not showing, a cartoon of a tearful prophet Mohamed."

Wrapping up the segment, Neely declared: "The magazine very much alive, three million copies printed, another two million ordered in numerous languages. The cartoonists say this is a triumph for free speech."

Good Morning America demonstrated a similar contradiction. Co-host Robin Roberts announced: "The French are certainly showing no fear in the face of terrorism this morning. That new issue of Charlie Hebdo selling out across the country this morning..." Correspondent Terry Moran led off his report by noting that getting a copy of the magazine "has become a kind of declaration of defiance against terror..." Despite such pronouncements, the morning show did not show the cover.

CBS This Morning was the only network morning show to actually allow the cover to be shown on air. As co-host Charlie Rose reported that "Across France people lined up this morning to buy copies of Charlie Hebdo's new edition," an image appeared on screen of French readers holding up their copies of the paper.

In the report that followed, correspondent Elizabeth Palmer held up her own copy of Charlie Hebdo: "One of the hard-working members of our crew here in Paris got up and was at the newsstand by 7:00 and was rationed to one copy. Predictably, this cover is causing waves among some conservative Muslims."

Tuesday's evening newscasts all covered the upcoming release of the magazine, but again, only CBS Evening News showed the cover.

Following the attack, only CBS showed the initial Mohamed cartoons that made Charlie Hebdo a target for Islamic extremists.

Here are transcripts of the January 14 network coverage of Charlie Hebdo:

MATT LAUER: Sold out. Charlie Hebdo releases its first issue one week after the massacre at its Paris offices. Three million copies snapped up within hours. While in a new video Al Qaeda warns of more terror to come.

LAUER: Let's start on a Wednesday morning with our top story, a defiant Charlie Hebdo releases its very first issue since that terror attack on its Paris offices, with a cartoon of the Prophet Mohamed on the cover. NBC's chief global correspondent Bill Neely is in Paris. Bill, good morning, what can you tell us? 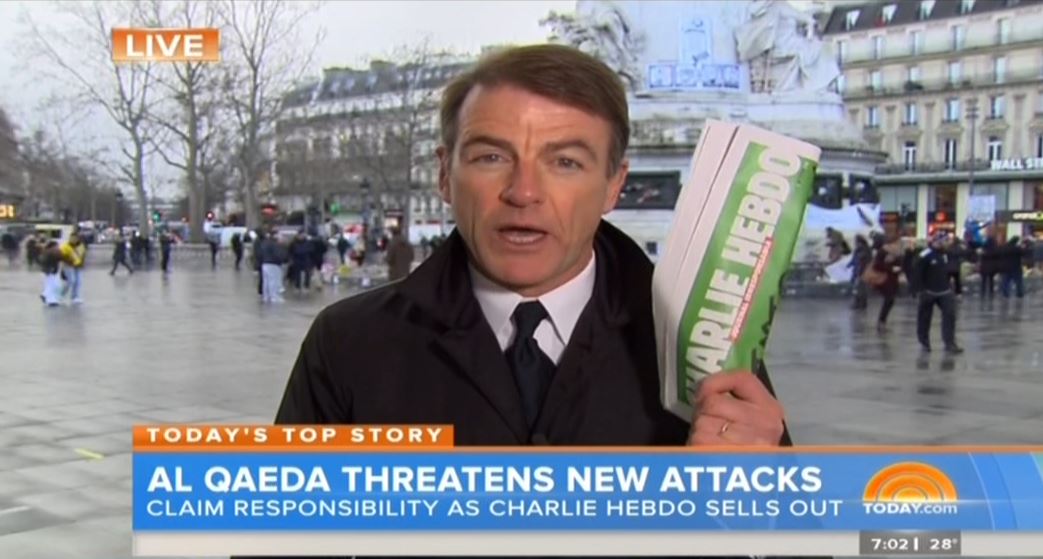 BILL NEELY: Good morning, Matt. Well, almost a week ago at almost exactly this time, a dozen people lay dead in or around the offices of a magazine, terrorists had tried to kill it off. Today Charlie Hebdo is back on the street, seemingly stronger than ever. All of Paris seems to want to buy it.

It's a satirical magazine that used to sell 50,000 copies a week. Today the first of three million copies hit the streets, making it for this week not only the world's most famous newspaper, but one of the best selling. On its cover, which NBC News is not showing, a cartoon of a tearful prophet Mohamed.

They waited for it through the night, it sold out quickly.

UNIDENTIFIED WOMAN: I tried to buy Charlie Hebdo, but no Charlie.

NEELY: This was the scene outside the magazine exactly a week ago. New video shows the Kouachi brothers calmly reloading after killing most of their victims. The police confront them, then reverse at speed. One brother firing on the move. Within seconds they would kill a policeman at point blank range. He was buried yesterday, a Muslim policeman's distraught relatives comforted by the French president.

After a massacre now claimed by Al Qaeda in Yemen. In a new video they said they ordered the men to avenge insults against the Prophet Mohamed.

In the French parliament, lawmakers sang their national anthem and passed new laws to combat Islamists. Joining the debate, a Dutch Muslim mayor, who had a message for his fellow immigrants. "If you don't like western freedoms or cartoonists," he says, "just pack you bags and get out."

NEELY: In Paris, thousands of Troops and police remain on high alert. On the streets, too, three million copies of a provocative magazine.

Well, the massacre was a week ago, but the grieving still goes on. In fact, one cartoonist being laid to rest this morning. The magazine very much alive, three million copies printed, another two million ordered in numerous languages. The cartoonists say this is a triumph for free speech. Matt.

LAUER: Alright, Bill Neely live for us in Paris this morning. Bill, thank you very much.

GEORGE STEPHANOPOULOS: And the new issue of Charlie Hebdo goes on sale in Paris. Its cartoons outraging Muslims around the world again.

ROBIN ROBERTS: The French are certainly showing no fear in the face of terrorism this morning. That new issue of Charlie Hebdo selling out across the country this morning, with people waiting hours to buy it. ABC's Terry Moran is in Paris with more on that side of the story. Good morning, Terry. 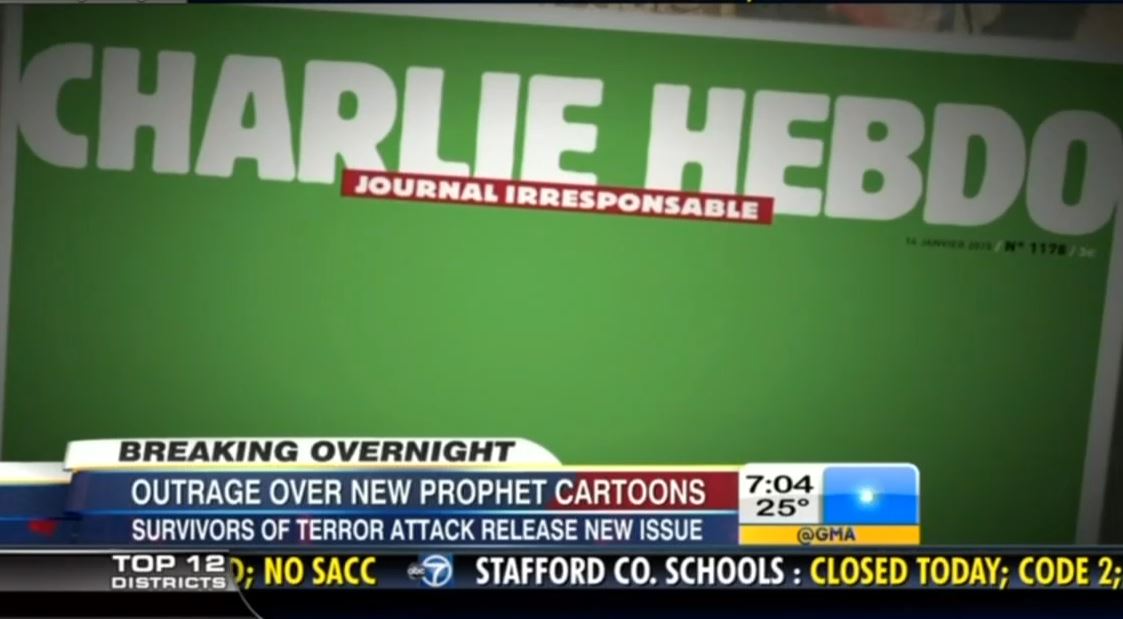 TERRY MORAN: Good morning, Robin. Here on the famous Champs-Elysees, you can't buy a copy of Charlie Hebdo. You can't buy a copy anywhere in France, as you point out. 700,000 sold out in just a few hours. Getting one has become a kind of declaration of defiance against terror, but the magazine once again spiking tension with the Muslim community here and around the world, while French authorities continue to pursue every lead into the terror underground.

Before dawn this morning, people lining up at shops and news kiosks waiting while drivers loaded up copies of Charlie Hebdo and it seemed to be a privilege for them. "Distributing Charlie Hebdo," says Jean Batiste, "it warms my heart because we say to ourselves that he is still here. He's never left." The lines were so long that the fierce little weekly announced this morning it will now print five million copies of this issue – it usually prints 60,000.

At a press conference, the Charlie Hebdo staff spoke out, traumatized still. "We're just cartoonists who like to draw little characters like when we were kids," Luz, who drew the cover, said. "The terrorists were kids once, they drew like all kids, so at one stage they lost their sense of humor."

But Muslim leaders here in France and around the world blasted the new issue as a provocation, and one said, "an act of war."

France is practically on a war footing, 10,000 troops deployed. The anti-Semitic comedian Dieudonne arrested for incitement after his Facebook post that supported the attackers.

And an extraordinary moment in the National Assembly, politicians rising, singing the French national anthem.

France has roused into action, no question about it. Considering a crackdown, those legislators right now debating whether or not France should have some version of a Patriot Act, which is a very controversial idea here. George.

STEPHANOPOULOS: Okay, Terry, thanks very much.

CHARLIE ROSE: Across France people lined up this morning to buy copies of Charlie Hebdo's new edition. Elizabeth Palmer is outside the magazine's headquarters in Paris. Elizabeth, good morning. 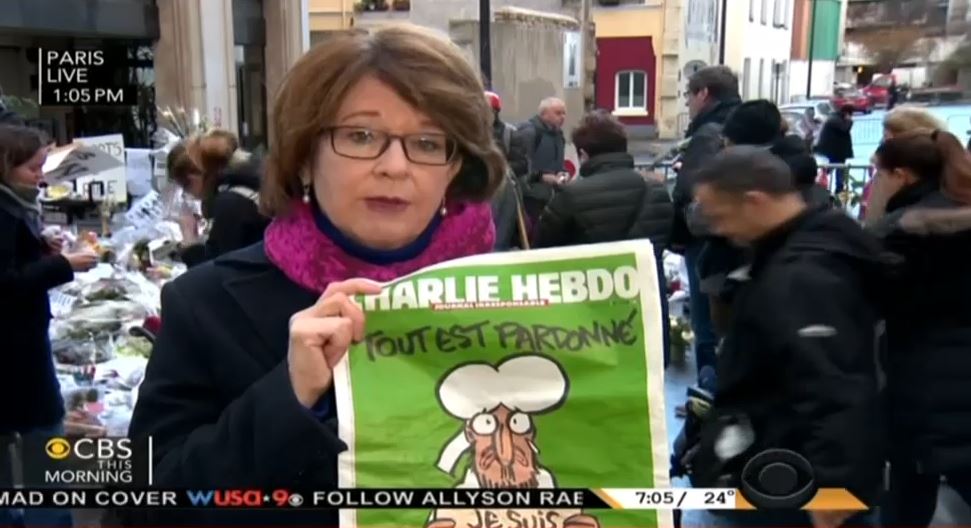 ELIZABETH PALMER: Good morning. As you can see behind me, the mound of flowers outside the offices has continued to grow. There are hundreds of bouquets, and also pens, which is the new symbol of defense of freedom of expression. People are still coming to pay their respects and to read the notes of condolence.

As you mentioned, there is a new video this morning from Al Qaeda in the Arabian Peninsula. Of course it's impossible to verify the truth of the claims in it, but we do know that it has come from Al Qaeda's official media arm. In it, one of the leaders of Al Qaeda in the Arabian Peninsula claims his organization chose the magazine as the target for the attack and both planned and paid for it.

New video shows once again the cold determination of the Kouachi brothers as they come face-to-face with a police car during their getaway after the killings. They open up on the police, who retreat, and the Kouachis brazenly drive away.

Security forces are now reviewing their operations over the three days of shootings and hostage takings, both at the printing plant outside Paris and in the suburban kosher supermarket. The investigation is wide ranging. Among other things, the police have said they're looking for six accomplices suspected to be members of a cell that helped with the attacks, a Mini Cooper car registered to Hayat Boumeddiene, the partner of hostage taker Amedy Coulibaly, the man seen on security camera video with Boumeddiene in Istanbul airport, and any links this man, Fritz-Joly Joachin, under arrest in Bulgaria, had with the Kouachi brothers.

Overnight, the first bundles of this week's Charlie Hebdo, with its controversial cover, were shipped to news stands across the country. But they sold like hotcakes, and by mid-morning there were none left, though the magazine has promised there will be a second wave by tomorrow. One of the hard-working members of our crew here in Paris got up and was at the newsstand by 7:00 and was rationed to one copy. Predictably, this cover is causing waves among some conservative Muslims. Gayle.