A jubilant Chris Matthews hailed Pope Francis's recent comments suggesting that Christians who make a living by manufacturing or selling weapons are hypocrites. Of course back in 2009, Matthews blasted a Catholic bishop for daring to insist that Catholic politicians need to put the teachings of the Church on human life above their fealty to the abortion rights lobby. 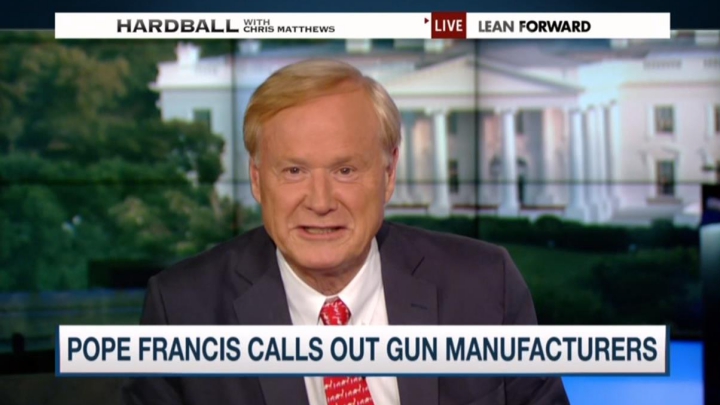 CHRIS MATTHEWS: Well, don't you love it? Pope Francis is once again rankling conservatives: this time he's taking on guns! The Holy Father's on a pastoral trip in Turran (sic), uh, Turin, and he says people who manufacture guns and weapons and call themselves Christians are hypocrites! That's the pope talking.

Last week, he released an encyclical saying that global warming is real, it's manmade, and urgent action's needed to be done to combat it. He's getting around, making the rounds on the right I'd say, the Holy Father. We'll be right back.

Following a brief commercial break, Matthews turned his evening's discussion panel to the matter of the role that the debate over gun rights might play in the 2016 presidential race, particularly in light of the Dylann Roof's deadly spree shooting last week at Emanuel AME church in Charleston, South Carolina.

At one point in the discussion, Matthews and company discussed how Republicans generally favor waiting periods for obtaining an abortion, but oppose them for purchasing a handgun. That's when Matthews dismissively wondered why in the world anyone would be in such a rush to buy a gun and left-wing panelist David Corn of Mother Jones magazine relished the notion of Republicans having to hit back at a popular pope on the gun rights issue rather than say Hillary Clinton, a safer partisan target:

DAVID CORN: The Republican party wants a waiting period for any woman who wants an abortion, yet they hate waiting periods for guns and they try to fight those things. They try to--

CHRIS MATTHEWS: Who needs a gun that fast?

CORN: Well, that's the question. Who needs a gun that fast? I mean, they always come up with arguments. Someone who is in danger, you know, it's the good guy or good gal with a gun myth.

MATTHEWS: How many guns do we have in this country right now?

CORN: Several hundred million. And how it is immoral--

MATTHEWS: More guns than people, right, we're like New Zealanders with sheep, only instead of sheep, we have more guns.

CORN: Well, I really want to see how Wayne LaPierre and the NRA now have to take on the pope. It's one thing to take on Hillary Clinton or Barack Obama.

MATTHEWS: Oh, they'll do it the way Jeb did it the other day.

MATTHEWS: This isn't, he's out of his lane.

Far be it for Chris Matthews to have any logical consistency in his politics. Back in November 2009, Matthews badgered a Catholic bishop for clergy who dare to tell pro-choice Democratic Catholics that they are morally obligated to oppose abortion.

Apparently MSNBC's Chris Matthews doesn't want Catholics involved in the political process at all - especially when it comes to abortion. Earlier this month the "Hardball" host declared "The clergy should stay off Capitol Hill." Last night, he accused Thomas Tobin, bishop of Providence, Rhode Island, of "telling public officials how to set public policy," "stepping beyond moral teaching," and "basically assuming an authority" because the bishop requested that Rhode Island Democrat Rep. Patrick Kennedy not take communion due to his support for abortion.

Matthews' based his accusations on a portion of a speech on religion delivered by then Sen. John F. Kennedy in which he stated:

I believe in an America that is official neither Catholic, Protestant, nor Jewish, where no public official either requests or accept instructions on public policy from the Pope, the National Council of Churches, or any other ecclesiastical source, where no religious body seeks to impose its will, directly or indirectly, upon the general populace or the public acts of its officials.