In the midst of tonight's discussion with Kate Andersen Brower about her new book The Residence -- a behind-the-scenes look at the White House told from the perspectives for domestic staff there -- Hardball host Chris Matthews sought to innocently explain away an account in the book where first daughter Chelsea Clinton referred to Secret Service agents as "pigs."

Here's the relevant transcript and video: 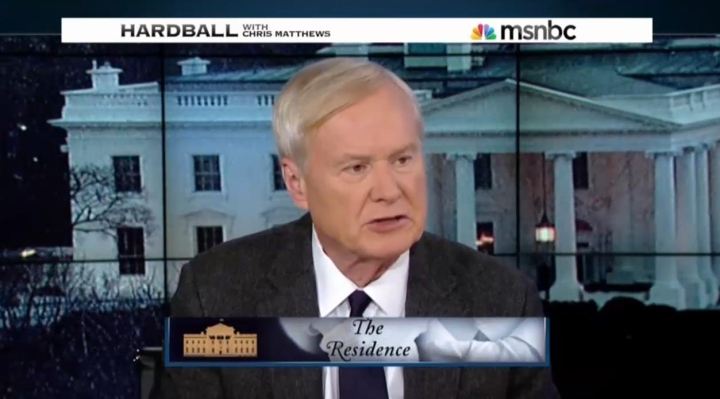 KATE ANDERSEN BROWER: That's a different relationship. Chelsea Clinton was beloved by the resident staffers, but a story told to me on the record by a florist, was that he was in the second-floor family kitchen and Chelsea was on the phone and she was talking to someone, a secret service agent was standing there, getting ready to take her to Sidwell Friends, and she said, wait a minute, one of the pigs is here, and so the Secret Service agent said, excuse me, ma'am, I stand between you and a gun and a bullet. So I mean, there was definitely tension.

MATTHEWS: And then she said?

ANDERSEN BROWER: She said that's what my parents call you.

MATTHEWS: Now, I think people who didn't grow up in the '60s wouldn't know, now, I'm not defending it, of course, but that word "pigs" has a particular meaning for people in the '60s. They worked in the McGovern campaign, they were against the police and the Chicago police riots and all that. So when they say, "pigs," that's a very '60s term. I do find it odd to apply to people who are protecting your life. But why do you think that antipathy had built up there at that point? Any evidence in your reporting? Why did the Clintons not like or even kid around by calling them pigs?

ANDERSEN BROWER: It took them a long time to even trust the resident staff, almost a year, but you know, they'd been through Troopergate, they were at that point feeling like they were really under siege in the White House.

MATTHEWS: And nobody could be trusted.

ANDERSEN BROWER: Exactly. And in some ways, they were right. Right, I mean, there were some instances where people were listening in on them...