Sen. Rand Paul’s abortion question is beginning to haunt Rep. Debbie Wasserman Schultz – thanks to some in the media.

During a CNN interview on April 14, DNC Chair Debbie Wasserman Schultz (D-Fla.) refused to cite any acceptable restrictions on abortion – and deemed the decision to abort a 7-pound baby a “personal liberty.” The abortion question continued to follow her during a Fox interview where she couldn’t pick a “specific date and time” for when life begins. 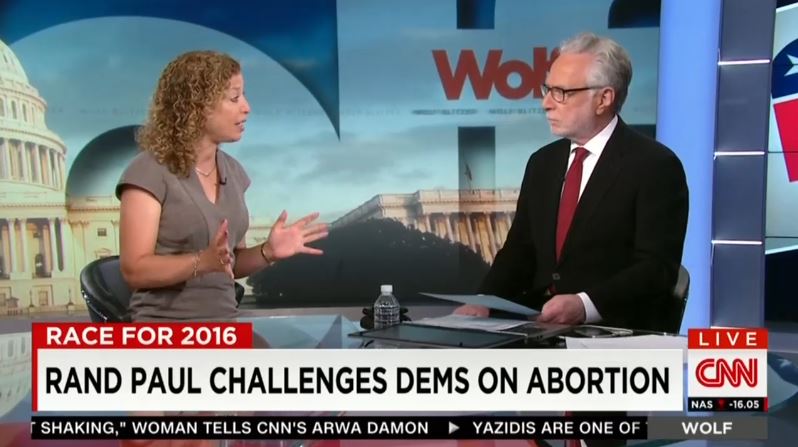 The issue arose when a New Hampshire journalist asked Sen. Rand Paul (R-Ky.) about his stance on abortion April 8. The 2016 presidential candidate retorted, “You go back and you ask [Rep.] Debbie Wasserman Schultz if she’s OK with killing a seven-pound baby that is just not yet born yet.”

Exposing a media double-standard, Sen. Paul continued, “When you get an answer from Debbie, come back to me.”

Hours later, Rep. Wasserman Schultz replied to Sen. Paul (but not, of course, because the media asked her).

“I support letting women and their doctors make this decision without government getting involved. Period," she wrote in a DNC statement.

During a CNN interview with host Wolf Blitzer later that day, Sen. Paul translated her stance.

“Debbie's position, which I guess is the Democrat party position, that an abortion all the way up until the day of birth would be fine,” he said.

“[I]s he right when he says that it's okay from your perspective to kill a 7-pound baby in uterus, is that your position?” he asked. (Note: Blitzer actually used the word “kill.”)

“We have very different definitions of personal liberty,” she said. “The Democratic Party’s position is that we are pro-choice.”

In other words, according to Rep. Wasserman Schultz, “We believe that a decision on a woman's reproductive choices is best left between a woman and her doctor and I am still waiting for Rand Paul to say whether or not he supports exceptions when a woman is raped.”

“You would admit that you can't have women aborting third trimester babies just on a whim, right?” Kelly pushed later in the interview. “You agree there are some limits.”

That was the one thing Rep. Wasserman Schultz could agree with.

“Certainly not on a whim, but when a doctor –” she interjected. “There's no ambivalence here, we're very clear. We believe that that decision is best left not to government but between a woman and her doctor.”

In the end, Rep. Wasserman Schultz hinted she doesn’t know when life begins.

“I can't tell you a specific date and time past which we on all – in all cases are certain that that choice shouldn't be made because that decision is very unique and individual to the woman,” she said, “and should be in consultation with her conscience and her god and her doctor, that is a decision left to her.”

“By denying the biological origins of life, and dismissing nature-based differences between the sexes, the Democratic Party, as represented by its spokesperson,” Donohue challenged, “is marginalizing itself from biology, common sense, and the American public.”