On Tuesday morning, the big three (ABC, CBS, NBC) networks continued to play-up the supposed controversy surrounding a letter signed by 47 Republican senators to the leaders of Iran regarding its negotiations with the Obama administration over its nuclear program.

While all three network morning shows covered the GOP letter, CBS This Morning did its best to promote the harshest critics with fill-in host Jeff Glor introducing the network’s coverage by declaring “[i]n Washington this morning Democrats are denouncing a letter to Iran signed by most of the 54 Republican Senators. This morning's New York Daily News headline calls those Republicans 'traitors.'”

CBS reporter Nancy Cordes began her report by highlighting Democratic opposition to the GOP letter and even touted a German publication slamming the Republican effort:

And he [Tom Cotton] says he was merely trying to educate the Iranians on how the U.S. Constitution works but Democrats say it sends mixed messages to both our allies and our enemies. In fact, one top German publication this morning called it sabotage which probably needs no translation.

Cordes continued to channel the letter's opponents by noting that “[t]he State Department and Senate Democrats accuse Republicans of trying to sabotage the negotiations” before she played a clip of Democratic Senator Harry Reid blasting the letter as a “hard slap in the face of not only the United States but our allies.” 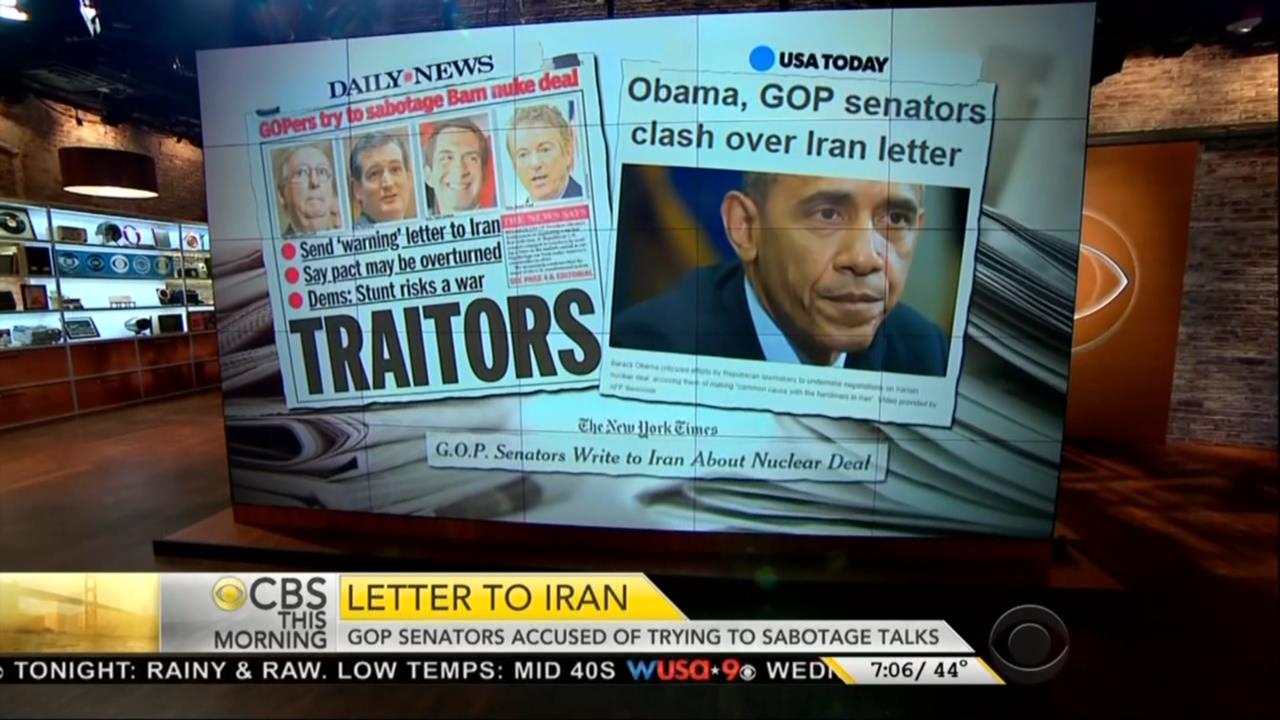 The CBS reporter did play several clips of her interview with Tom Cotton but the majority of Cordes’ report focused on the supposed backlash Republicans were being met with for criticizing the president’s decision to completely bypass Congress while negotiating with Iran.

ABC’s Good Morning America and NBC’s Today did not go as far as CBS in touting the opposition to the GOP. Neither network mentioned the New York Daily News headline accusing the Republicans of being “traitors” to America.

GMA co-host George Stephanopoulos introduced ABC’s coverage by announcing “the White House hitting back hard at Republican senators who wrote directly to Iranian leaders warning them a nuclear deal would not last.” ABC News Chief White House Correspondent went on to detail how “Vice President Biden called the letter dangerous and said it is beneath the dignity of the Congress to try to undermine the president as he conducts foreign policy.”

Like CBS’s Nancy Cordes, Jonathan Karl also played a clip of his interview with Republican Senator Tom Cotton but the ABC reporter made sure to conclude his report by mentioning how “the White House will point the finger right at Congress for undermining these talks if they do go down.”

In contrast to ABC and CBS, NBC’s Today failed to include any soundbites of Tom Cotton in their coverage. Instead, news reader Natalie Morales introduced the network's coverage by noting how “ It's Joe Biden in that letter blasting 47 Republican senators this morning accusing them of undermining President Obama in international talks with Tehran.” Morales then turned to reporter Kelly O’Donnell who continued to promote Biden’s response to the GOP:

Vice President Biden knows the Senate better than anyone in the Obama administration and his message is a rare and unusually strong blast of disappointment and even disbelief. Biden is upset by this letter signed by nearly all the Republican senators directed to the Islamic republic of Iran.

While all three networks were quick to tout the opposition to the GOP letter, none of them acknowledged that such action is not unprecedented. On Tuesday, the New York Times documented three instances in which Democrats in Congress went a step further than Republicans during President George W. Bush's tenure and actually traveled to foreign nations to oppose U.S. foreign policy:

Jim Wright, the Democratic House speaker during Ronald Reagan’s presidency, was accused of interfering when he met with opposing leaders in Nicaragua’s contra war. Three House Democrats went to Iraq in 2002 before President George W. Bush’s invasion to try to head off war. And Nancy Pelosi, the House Democratic leader, went to Syria in 2007 to meet with President Bashar al-Assad against the wishes of the Bush administration, which was trying to isolate him.

Furthermore, as noted by Forbes in 2009, in 1991 Tim Sebastian, a reporter for the London Times revealed that in 1983 former Senator Ted Kennedy (D-Mass.) actually wrote a letter to Yuri Andropov, General Secretary of the Central Committee of the Communist Party, seeking to undermine President Reagan's negotiations with the Communist country. When the report emerged, the "big three" networks ignored the Democrat's efforts to interfere in U.S. foreign policy:

He [Ted Kennedy] proposed an unabashed quid pro quo. Kennedy would lend Andropov a hand in dealing with President Reagan. In return, the Soviet leader would lend the Democratic Party a hand in challenging Reagan in the 1984 presidential election. “The only real potential threats to Reagan are problems of war and peace and Soviet-American relations,” the memorandum stated. “These issues, according to the senator, will without a doubt become the most important of the election campaign.”

JEFF GLOR: In Washington this morning Democrats are denouncing a letter to Iran signed by most of the 54 Republican Senators. This morning's New York Daily News headline calls those Republicans “traitors.” Vice President Joe Biden said the letter undercuts President Obama and his nuclear negotiators. Nancy Cordes on Capitol Hill spoke with the senator who wrote that letter. Nancy, good morning.

NANCY CORDES: Good morning. And he says he was merely trying to educate the Iranians on how the U.S. Constitution works but Democrats say it sends mixed messages to both our allies and our enemies. In fact, one top German publication this morning called it sabotage which probably needs no translation. In their open letter to Iranian leaders, 47 Republicans warned that if a deal is struck with Secretary of State John Kerry the Senate must ratify it by a two thirds vote otherwise the next president could revoke the agreement with the stroke of a pen. The State Department and Senate Democrats accuse Republicans of trying to sabotage the negotiations.

HARRY REID: This letter is a hard slap in the face of not only the United States but our allies.

CORDES: Iran’s Foreign Minister called the letter propaganda and expressed “astonishment that some members of U.S. Congress find it appropriate to write to leaders of another country against their own President.” 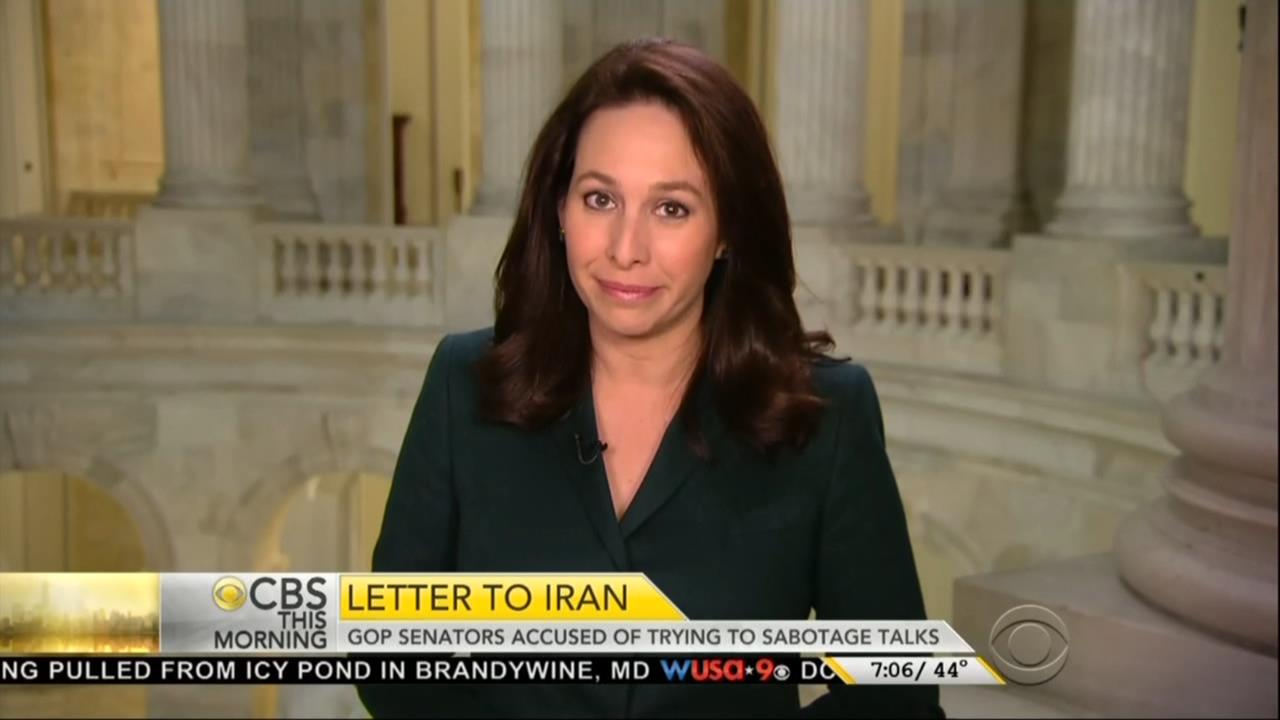 TOM COTTON: The only thing unprecedented is an American president negotiating a nuclear agreement with the world's leading state sponsor of terrorism without congressional approval.

CORDES: Freshman Arkansas Senator Tom Cotton wrote the Republican letter. Shouldn't the Iranians be getting one message from the entire U.S. government?

COTTON: Well the message that we are sending is that Congress is not going to allow them to get a nuclear weapon.

CORDES: Republicans worry that any U.S. brokered agreement will only temporarily halt Iran’s path to the bomb while making its totalitarian regime stronger by lifting sanctions. President Obama was asked about the letter yesterday.

BARACK OBAMA: Well, I think it’s somewhat ironic to see some members of Congress wanting to make common cause with the hardliners in Iran. It's an unusual coalition.

CORDES: And he says he does not need congressional approval for a deal. There were a handful of Senate Republicans who did not sign the letter. One told us at that this point in these delicate negotiations Republicans should be sharing their concerns directly with the White House, not with Iran. Though Senator John McCain, who did sign the letter, said that the White House is being “hysterical about this” and that he communicates with foreign leaders all the time. Charlie?