Mark Levin was plain. And the question is now on the table for discussion.

Both on his own eponymous radio show and in an appearance on Sean Hannity’s TV show, in discussing President Obama’s treatment of Israel’s Prime Minister Benjamin Netanyahu Mark specifically and in detail accused the Obama administration of anti-Semitism and liberals in general of flat-out racism, all of this protected by what he called the “Praetorian guard media.”  Bravo to Mr. Levin. It is time - way past time - to be having this conversation.

On the subject of anti-Semitism, he put it this way:

I think it’s time for a national discussion about Barack Obama and his administration and the stench of anti-Semitism that’s in this White House….

There’s been a relentless attack on Benjamin Netanyahu hatched from the Oval Office. …We don’t have a media in this country, we have propagandists. There’s a few journalists who stand out but that’s not ‘the media’ that’s a few journalists. And that’s what we have and they repeat what Obama tells them to repeat….that’s why I call them the praetorian guard media. Obama has a hate on for Netanyahu, he has a hate on for Israel. And I firmly believe he’s anti-Semitic. What other person would hang around with a Jeremiah Wright, a Rashid Khalidi… an Al Sharpton? Would reach out to the Muslim Brotherhood and bring them into the Oval Office, reach out to this group CAIR and bring them into the administration in various capacities? What kind of president would treat the Islamo-Nazi regimes with kid gloves, as a matter of fact in the case of Iran negotiate with them,  beg them, bend over backwards for a deal. Israel sees Obama’s handiwork in the Middle East. 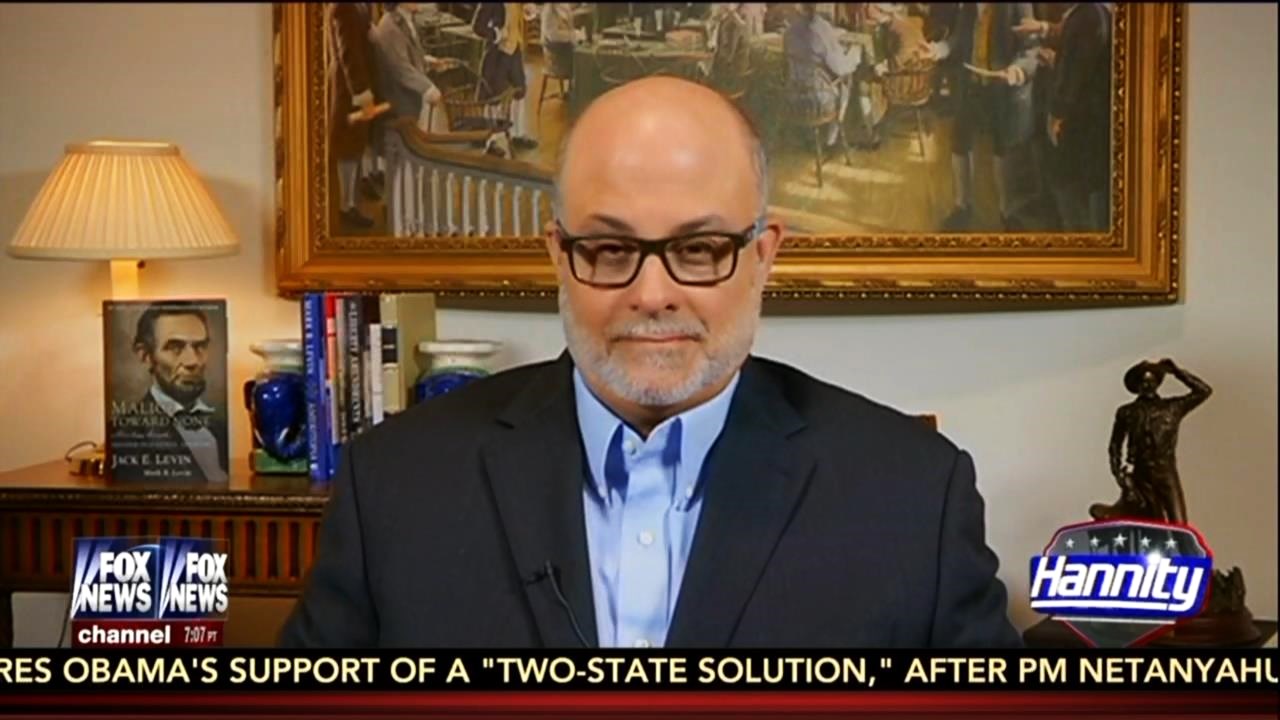 Levin went on to describe the inherent racism of the American Left:

We’re on to the left, ladies and gentlemen…(this is) the party of slavery, the party of segregation, the party of poll taxes and literacy tests…. the race-baiting is endless because the Democrat party cannot survive without it…..The history of civil rights and human rights when it comes to blacks in particular in this country is a history of fighting the Democrat Party. ….The Democrat Party hasn’t changed (it’s racism) fundamentally…it’s changed it’s tactics…. It’s always the first line of propaganda with the left and it’s international now….It’s the left that’s full of the racists and the race baiters…this is the Obama way, the Alinsky way, the Marxist way, the Democrat Party way..”

“Given the media,” he added, it is difficult to fight the racism. Which is to say, the media is in on all of this. Levin then went on with a media “montage” of one liberal commentator after another employing the American Left’s favorite tactic - accusing someone else, Netanyahu in this case - of racism. He noted:

“Today again we have the media going on and on…trying to portray him (Netanyahu and his address to Congress) as divisive in the United States…now as racist…how outrageous is this?...

“So the people who are the true race-baiters, the people who are trying to get out the (Israeli) vote based on ethnicity, based on skin color, based on religion” are accusing Netanyahu of racism because he points out what’s being done. Noting that “if there’s anything racist” it’s the American Left and the Obama administration because it’s “all they know” whether the issue is Netanyahu’s re-election in Israel, Ferguson, the NYPD, or the GOP dealing with the Loretta Lynch nomination, racism is the be-all and end all. They need it for political victories - and they always have. And I would add: is it any wonder former Vice President Dick Cheney accuses Obama and Holder of playing the race card?"

Later that night on the Hannity television show, Levin made the same point again, as with this clip on Obama as anti-Semitic:

Meanwhile, over on Neil Cavuto’s show, Cavuto ran through a list of media outlets that had trashed Netanyahu (including The New York Times, USA Today, Time, CNN, NBC and U.S. News.) The Jerusalem Post did a version of the same thing, citing various American media outlets. Here were but three of the outlets listed by Cavuto:

The New York Times: ”Prime Minister Benjamin Netanyahu’s outright rejection of a Palestinian state and his racist rant against Israeli Arab voters on Tuesday showed that he has forfeited any claim to representing all Israelis.”

Time: “He won because he ran as a bigot.”

USA Today: “In a fear-mongering scramble to avoid defeat, Netanyahu seemed to leave no bridge unburned. He blamed his plight on dark foreign forces that were hostile to him and to Israel, and he attacked Israeli Arabs for having the audacity to exercise their right to vote.”

The MRC’s Brent Bozell was on the Cavuto show and directly noted: “What you're looking at now in the media coverage of Netanyahu is simply the megaphone for Barack Obama, and the lack of professionalism, I think, is astonishing, and it's on newspaper reports, it’s on television, it’s all over the media, but there's no pretense of showing any sense of fairness towards this man.”

Some time ago in The American Spectator  -- a good bit of which was re-published online by The Wall Street Journal -- I took note of the Democrat Party’s two centuries worth of the most disgracefully racist policies in American history. The endless platforms supporting slavery, segregation, the support for lynching and the Ku Klux Klan.  The notion that the party of Barack Obama - who won his last term in office by dividing Americans by gender (the “war on women”), race and religion (enlisting the services of  the race-baiting anti-Semite Al Sharpton), while running an ad that said his opponent's cruelty led to the death of a steel worker’s wife -- somehow didn’t and doesn’t take the low road to hang on to the White House? This is preposterous to the point of being utterly laughable.  In 2012 the media covered for Obama’s divisiveness -- and now it’s Netanyahu who is the problem?

Mark also cited something else that is ignored these days. As we watch the anti-Israel sludge pour forth from today’s Times, he recalls the role of the New York Times as a genuine Holocaust denier back there in the 1930’s and 1940’s when speaking out for the Jews of Europe could have helped. Yes indeed, the Times itself, as Mark found and linked here by the paper’s own decades-later-admission spent Adolph Hitler’s rise and reign “turning away from the Holocaust.” Confessed the paper’s Max Frankel in a look back at the paper during its 150th anniversary in 2001:

“AND then there was failure: none greater than the staggering, staining failure of The New York Times to depict Hitler's methodical extermination of the Jews of Europe as a horror beyond all other horrors in World War II -- a Nazi war within the war crying out for illumination.
.
….This reticence has been a subject of extensive scholarly inquiry and also much speculation and condemnation. Critics have blamed ''self-hating Jews'' and ''anti-Zionists'' among the paper's owners and staff. Defenders have cited the sketchiness of much information about the death camps in Eastern Europe and also the inability of prewar generations to fully comprehend the industrial gassing of millions of innocents -- a machinery of death not yet exposed by those chilling mounds of Jews' bones, hair, shoes, rings.

No single explanation seems to suffice for what was surely the century's bitterest journalistic failure….”

Get that? At least one of the reasons listed by the Times for its admitted failure was due to the alleged “self-hating Jews” and “anti-Zionists” who owned and ran the paper!  And whose descendants still run it.

All of this comes as various outlets are picking up on the anti-Semitism that free floats in American leftist circles these days. Over at the New York Post Phyllis Chesler, author of The New Anti-Semitism, wrote the other day of what she accurately calls the “oldest hatred”:

“Anti-Semitism and anti-Zionism — two sides of the same coin — are raging yet again. They are brutally alive in the Middle East, Europe and even here in America…..In this country, we hear shouts of Jew-hatred at every pro-Palestinian demonstration.

We read all about it in the biased left-liberal, anti-Israel media and see it in President Obama’s overt hostility to Israel and its prime minister, Benjamin Netanyahu.”

Chesler goes on to say that this flagrant Jew-hating is nothing less than “unadulterated racism” but that now there is finally “push-back.”

As well there should be. There is in fact a real reason - based in historical fact - for raising this issue.

The hard historical fact is that racism -- and anti-Semitism as “the oldest hatred” is a very distinct form of racism -- has historically been at the core of the American Left. It has taken the form of  the very-much-on-the-record Democratic Party platforms written from the 1800’s all the way through to the mid-twentieth century, supporting either slavery or segregation all the way.

It is a historical fact that underneath those Klan hoods were progressives, with Franklin Roosevelt even putting then-Alabama Senator Hugo Black -- a progressive leader and lifetime Klan member -- on the Supreme Court. The Klan, which dominated the 1924 Democrat Convention and wrote the party platform, hated Jews as well as blacks. Even today the former Grand Wizard of the Klan, David Duke, supported the Occupy Wall Street movement,  Duke linking his support of OWS with attacks on “Zionist bankers.” And let it not be forgotten that the anti-Israeli sentiment inside the 2012 Democratic Convention was palpable and widely noted as television cameras captured the reality that delegates were loudly booing the effort to reverse the decision made for the 2012 platform to recognize Jerusalem as the capital of Israel. In the Daily Beast, Gil Troy, a Professor of History at McGill University, noted this:

That display of hostility in the Democratic lovefest, as well as the initial desire to drop the Jerusalem plank from the Party platform, tells a tale about an internal Democratic debate—and possible shift—that pro-Israel Democrats are desperately trying to cover up….

Like it or not, the Democratic Party is becoming the home address of anti-Israel forces as well as Israel skeptics….(and that Obama’s actions towards Israel and Netanyahu may illustrate)… a hidden animus, at worst.

Suffice to say what was seen as an anti-Israel outburst at the 2012 convention was separated from the anti-Semitic Klan that ran the 1924 convention by a full 88 years, when Israel didn’t even exist. In other words? After almost a century, antagonism for things Jewish are still very much in evidence in Democratic circles.

But as all those disgraceful headlines and stories on Bibi Netanyahu illustrate vividly, Mark’s point is this historic anti-Semitism virus is now appearing all over the mainstream media in the dust-up over Bibi. In places like the New York Times, a paper that couldn’t even admit until  almost sixty years after the end of the Holocaust that yes, they too, had denied the Jews and sat idly by while the doors of the gas chambers clanged shut.