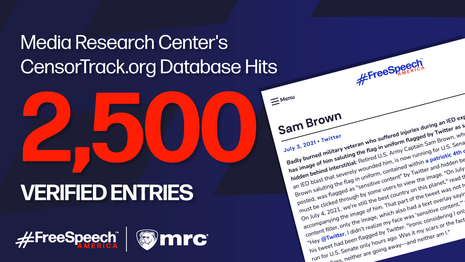 The CensorTrack database has cataloged 2,500 cases of Big Tech silencing conservatives online since March 2020. In that time, Big Tech has booted a sitting president, silenced members of the free press like the New York Post for its reporting on Hunter Biden and shut down free speech-oriented platforms like Parler.

Twitter censored and Facebook suppressed a story from the New York Post that claimed to expose the alleged corrupt dealings of now-President Joe Biden and his son Hunter Biden in Ukraine. Not only did Twitter ban users from posting the link to the story, but it also locked the Post’s account for 17 days. A post-election poll conducted by MRC found that 36 percent of Biden voters were not aware of the story, and 4.6 percent would not have voted for him if they had known about the scandal, which could have swung the outcome of the election.

Former President Donald Trump was also banned from at least 10 platforms after he called for “peace” following the Jan. 6 riot at the U.S. Capitol. He was kicked off of YouTube, Twitter, Facebook, Instagram, Twitch, Stripe, Snapchat, Reddit, TikTok and even Shopify. Facebook later announced that the former president would be suspended for at least two years. Twitter has since refused to allow him back.

Even conservatives who tried to form their own platform found that they could not escape Big Tech’s grasp. Apple and Google both removed Parler from their app stores. Amazon even booted the platform from its web hosting services in a move that temporarily shut down Parler’s website. Google also removed Gab, a similarly pro-free speech platform for so-called “hate speech.”

Thousands more examples of Big Tech censorship exist. YouTube demonetized One America News in October 2020 and suspended the channel for one week. Instagram refused to allow Sen. Marsha Blackburn (R-TN) to purchase ads for her children's book about Tennessee's ratification of the 19th Amendment. A recent investigation found that Amazon’s charity program, AmazonSmile, allows organizations like Planned Parenthood and The Satanic Temple to receive donations from the company. Meanwhile, conservative organizations like the Family Research Council and Alliance Defending Freedom cannot.