We have to think of the children … and then ban their books, apparently.

Sen. Marsha Blackburn (R-TN) and daughter Mary Morgan Ketchel’s new children’s book has been hindered yet again by Instagram, which banned ads for the book.

The book, “Camilla Can Vote: Celebrating the Centennial of Women’s Right to Vote,” tells the story of how Tennessee became the final of the 36 required states to ratify the 19th Amendment in 1920. Instagram censored ads for the book the first time in May, according to reporting by The Federalist. The ad was blocked for a second time on July 8, and then finally for the third time on the book’s launch date, July 15. 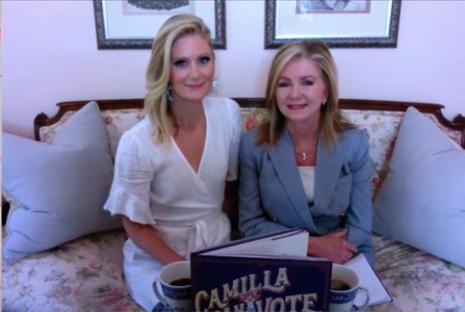 When the ad was initially censored, Instagram explained that “We have policies in place to ensure ads transparency around political ads and given the senator was a co-author, it’s reasonable it was flagged but upon review, political ads authorization is not necessary.”

Despite the acknowledgment of the company’s mistake, ads for the book were blocked for a second time. Instagram explained to The Federalist that the ad had been censored both times because it had the potential to “influence the outcome of an election, or existing proposed legislation.”

After each of the first two instances of censorship, Instagram reversed course and approved the ads after The Federalist reported on the censorship. After the second incident, Facebook, which owns Instagram, said that it would be “taking steps to hopefully prevent another instance of this.”

According to The Federalist, the ad that Ketchel ran for the book on the day of its launch “was pulled down from the site shortly after it was published garnering more than 100 views.” The author’s appeal was still pending as of the evening of launch day.

Ketchel also explained that after the first incident Instagram asked her to “register her personal account as a political group or influencer as if she were operating as a political action committee or campaign,” The Federalist summarized. Ketchel declined, explaining that her mother’s role as a senator should not result in deeper scrutiny and possible censorship of her own account when she does not engage in political behavior.

As of the posting of this article, Instagram has not responded to a request for comment on this incident.

Blackburn is a veteran of Big Tech censorship. When she first ran for Senate in 2017, Twitter prevented her from paying to promote a campaign ad. In the ad, Blackburn said: “I fought Planned Parenthood and we stopped the sale of baby body parts. Thank God.” According to AP reporter Erik Schelzig, Twitter called this statement “inflammatory” and insisted that she could only promote the ad if she removed the phrase “stopped the sale of baby body parts” from the video. Instead of folding to the pressure, Blackburn asked her followers to stand up to Big Tech by retweeting the ad. Twitter quickly reversed its decision.