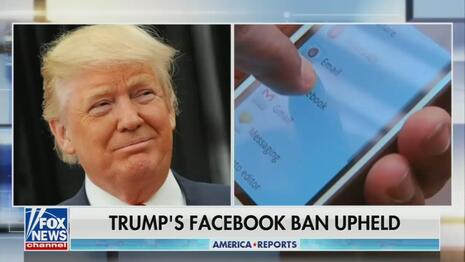 Even when decisions appear to go their way, liberal journalists on Twitter still find a way to complain.

The Facebook Oversight Board decided to at least temporarily uphold Facebook’s ban of former President Donald Trump but insisted Facebook review the decision within six months. Liberal tech journalists still appeared upset, despite the Board’s attempts at splitting the baby in the left’s favor.

Alex Wilhelm, the Senior Editor for TechCrunch, won the award for most professional tweet: “ahahahah back to ur little blog trump.”

New York Times contributor Kara Swisher said she has “never been happier to be wrong but what seems to have happened here is that the Facebook Oversight [B]oard punted back what had been punted to them by Facebook with Donald Trump as the irritating football of bile. This is far from over on my reading.” She continued: “I just did not anticipate that they would kick the fetid ball back, but it feels kinda perfect.”

Swisher later lost it over a tweet from Sen. Ted Cruz (R-TX). Cruz retweeted a NewsBusters article about the Board’s decision on Trump and called the decision: “Disgraceful. For every liberal celebrating Trump’s social media ban, if the Big Tech oligarchs can muzzle the former President, what’s to stop them from silencing you?” Swisher, in turn, complained: “This is really so much badly framed bullshit. This is a decision to make no decision about how to deal with what were clear violations at a dangerous time by a single persistently trolling individual. Disgraceful indeed, though more for the exhausting manipulation going on here.”

Gizmodo whined about the Board’s decision too. The outlet tweeted an article headlined: “Oversight Board Finds Facebook Took the Coward's Way Out With Trump Ban, Also Takes Coward’s Way Out.” In the piece, Gizmodo writer Tom McKay griped that “America may have to wait another six months to find out whether Facebook has the capacity to make a good decision.”

Kevin Roose, a technology columnist for The New York Times, said, “It’s pretty wild that FB set up an entire quasi-judiciary branch in order to give people someone besides Mark Zuckerberg to yell at, and their first big decision is that he should still be yelled at.”

Will Oremus, a former Slate senior technology writer, stated, “The thing is, Facebook's Trump problem isn't just a Trump problem. It's also a Facebook problem. And that's the part that the Facebook-chartered Oversight Board couldn't, or wouldn't, address.”

Facebook banned Trump following the Jan. 6 riot in Washington D.C. after he called for “peace.” Facebook then turned the case over to the Board Jan. 21. The Board upheld the ban, adding: “[I]t was not appropriate for Facebook to impose the indeterminate and standardless penalty of indefinite suspension.”