Even as President Donald Trump called for peace, social media companies purged posts and his video and restricted his accounts, with at least two platforms removing his presence indefinitely.

Facebook founder and CEO Mark Zuckerberg declared in a Facebook post that the block on Trump’s accounts on Facebook and Instagram would be extended indefinitely, as “We believe the risks of allowing the President to continue to use our service during this period are simply too great.” Zuckerberg specified: “[W]e are extending the block we have placed on his Facebook and Instagram accounts indefinitely and for at least the next two weeks until the peaceful transition of power is complete.”

This indefinite purge of Trump follows multiple Big Tech platforms cracking down on Trump’s call for peace amid the D.C. chaos, which saw rioters storm the U.S. Capitol building. 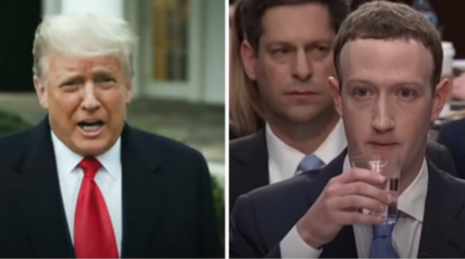 Zuckerberg went on to suggest that Trump “intends to use his remaining time in office to undermine the peaceful and lawful transition of power to his elected successor, Joe Biden.” He also completely obfuscated the meaning of Trump’s video calling for an end to the rioting, claiming instead: “His decision to use his platform to condone rather than condemn the actions of his supporters at the Capitol building has rightly disturbed people in the US and around the world. We removed these statements yesterday because we judged that their effect -- and likely their intent -- would be to provoke further violence.” Trump issued a statement via White House social media director Dan Scavino stating, “Even though I totally disagree with the outcome of the election, and the facts bear me out, nevertheless there will be an orderly transition on January 20th.”

Facebook was one of many major Big Tech companies who cracked down on Trump and his call for peace on Jan. 6.

“Twitter late Wednesday locked President Trump out of his account for the first time, the most punitive step the social media giant has taken against the president, on a day of social unrest and violence in Washington,” The Washington Post reported. The same article claimed: “The lockout, which will last for 12 hours, also included the removal of three tweets and a warning that Trump could be subject to a permanent suspension” if he continues to contest the election's legitimacy.

Washington Post tech reporter Cat Zakrzewski reported Trump’s call for peace has since been removed completely from multiple platforms. Zakrzewski announced that “Twitter just removed some of the president’s tweets, following Facebook and YouTube.” She announced earlier in the evening that “YouTube has also removed Trump’s video, though it will leave up copies with additional context.”

Rioters stormed the capital on Jan. 6 and Trump responded with a short video posted to Twitter that called for peace and an end to the protest. He assured his supporters, “I know your pain. I know your hurt,” but he told them, “you have to go home now. We have to have peace.” President Trump also assured his supporters that he agrees the election was “fraudulent,” but warned: “we can’t play into the hands of these people.” The tweet was promptly labeled with a warning: “This claim of election fraud is disputed, and this Tweet can’t be replied to, Retweeted, or liked due to a risk of violence.”

The “risk of violence” claim was especially bizarre since Trump made it clear he was calling for “peace” and urging the protesters go home. Trump’s post on Facebook was similarly labeled: “The US has laws, procedures, and established institutions to ensure the integrity of our elections.” At least Facebook didn’t treat a call for peace as a “risk of violence.”

Snapchat also went after the president’s account on its platform. “Snapchat locked President Donald Trump’s account after pro-Trump rioters stormed the United States Capitol,” TechCrunch reported. A Snap spokesperson reportedly confirmed to the outlet “that the action was taken on Wednesday and added that the company will monitor the situation closely before re-evaluating its decision,” TechCrunch explained.