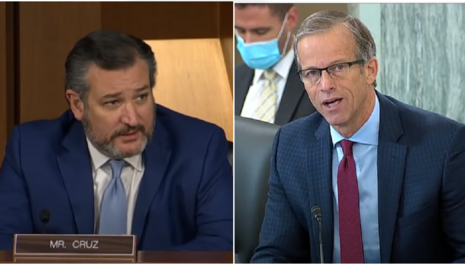 The fallout was the perfect top to a contentious hearing. Senate Republicans had been itching to confront Twitter and Facebook about the censorship of the New York Post story that claimed to expose alleged corrupt dealings of Democratic presidential nominee Joe Biden and his son Hunter Biden in Ukraine.

In Wednesday's much-anticipated hearing, Google CEO Sundar Pichai, Facebook CEO Mark Zuckerberg, and Dorsey appeared before the Senate Committee on Commerce, Science and Transportation to defend themselves against both left and right.

Senator Roger Wicker (R-MS) confronted Dorsey, and said that his platform “allows foreign dictators to post propaganda typically without restriction, yet you routinely restrict the president of the United States.” Wicker then cited two examples: The first was Twitter allowing a Chinese official to scapegoat the U.S. military for spreading the virus to Wuhan, China. The second example was how Twitter allowed Ayatollah Khamenei of Iran to “glorify violence.” One tweet described Israel as a “cancerous growth” and that the only remedy to its regime is “firm, armed resistance.”

Thune stated his position very plainly: "Google, Facebook and Twitter are not the referees of our democracy."

Cruz was not taking any of Twitter’s excuses. Dorsey claimed that Twitter does not influence elections, to which Cruz fired back: “if you don’t believe you have the power to influence elections, why do you block anything?” Dorsey responded that the Post’s story violated Twitter’s hacked materials policy. Cruz called this policy “facially, highly dubious.” Furthermore, Cruz asked, “You can censor the New York Post, you can censor Politico, you can presumably censor The New York Times or any other media outlet, Mr. Dorsey, who the hell elected you?”

Senator Marsha Blackburn (R-TN) pointed out that Twitter has censored President Donald Trump or his campaign 65 times, but has not censored democratic nominee Joe Biden at all.

In a comment to NewsBusters, Cruz said: “After years of flagrant bias against conservatives, Twitter and Facebook crossed the Rubicon two weeks ago when they brazenly censored the Post’s reporting on major allegations of corruption surrounding the Democrat presidential candidate, all just days before one of the most consequential elections in our nation’s history.”

The only time that Section 230 was actually discussed at length during the hearing was from the opening statements of Pichai, Zuckerburg, and Dorsey. They argued that Section 230 protections should remain in place. Pichai argued, “our ability to provide access to a wide range of information is only possible because of existing legal frameworks, like Section 230."

Zuckerberg called for change and more regulation, saying "I believe Congress should update the law to make sure it's working as intended. We support the ideas around transparency and industry collaboration that are being discussed in some of the current bipartisan proposals."

Editor's Note: Since publishing, Sen. Ted Cruz (R-TX) made a comment about the Post story he said could not be tweeted on the platform Twitter, stating, "An hour ago you couldn’t tweet this @nypost story. Now you can. https://nypost.com/2020/10/15/emails-reveal-how-hunter-biden-tried-to-cash-in-big-with-chinese-firm/."