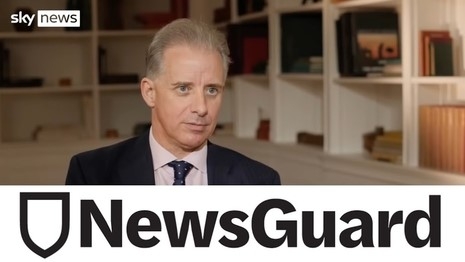 Leftist outlet BuzzFeed News promoted the debunked Steele dossier, which was used as the pretext for a prolonged federal investigation against former President Donald Trump that bore no fruit. The dossier remains on BuzzFeed News’s website, but NewsGuard continues to give BuzzFeed a perfect 100/100 score.

To put it into perspective, NewsGuard just slapped Fox News’s score from a green-shield 69.5/100 rating in December down to a red-shield rating of 57/100 last month for supposedly failing “to adhere to several basic journalistic standards.”

One of NewsGuard’s contentions with Fox is that the news outlet allegedly fails to handle “the difference between news and opinion responsibly.” Apparently, NewsGuard couldn’t correctly discern the difference, either.

A “Corrections” note at the bottom of its “nutrition label” scorecard for Fox News admitted that an earlier version falsely “referred to Sean Hannity, Tucker Carlson and Laura Ingraham as anchors [who cover the news] instead of hosts [who lead opinion shows], of their nighttime Fox News Channel programs.” This ridiculousness is even worse in light of BuzzFeed News’s nutty content, which NewsGuard apparently does approve of.

BuzzFeed News continues to host the bogus January 2017 Steele dossier it published on its website that made erroneous and discredited claims about alleged collusion between Trump and Russia. However, NewsGuard still gives the outlet a perfect 100/100 score.

MRC Free Speech America reached out to NewsGuard in February for comment on why it continued to give the outlet a flawless score.

In an email to MRC, NewsGuard General Manager Matt Skibinski justified his company’s perfect “100/100” rating for BuzzFeed News by noting the five-year timespan since the dossier’s publication and the fact that the dossier article is one “single story.”

That’s despite the fact that the Steele dossier was wielded as part of a protracted political investigation that cost $25.2 million in taxpayer dollars, according to Fox Business, and paralyzed the country for two years.

The infamous Mueller probe also aggravated the political environment in the U.S. and across the world, dominating headlines while other, important news took a backseat. In November 2021, years after the publication of the dossier, even The Washington Post retracted prior reporting about the primary source of the document’s wildest claims.

Skibinski’s weak justification that the dossier story wasn’t enough for a downgrade because it was a “single story” is pathetic in light of other nonsense BuzzFeed News has published. One 2014 BuzzFeed item masquerading as news, “14 Questions About Mpreg You Were Too Embarrassed To Ask,” promoted the insane idea that men can be pregnant.

The author, BuzzFeed News reporter Katie Notopoulos, pushed the notion that the contrived term “mpreg” is “a shortened version of male pregancy [sic]. M(ale)Preg(nancy).” A caption of a photo in the story of two pregnant male anime characters tried to sell readers that “mpreg” had become a “term for a genre of art and literature where a man is pregnant.”

“Though mpreg may vary, there's a something [sic] called the omegaverse which explains the laws of who mpregs who. Basically, men can be alphas, betas, or omegas. Omegas can be impregnated by alphas and sometimes betas. Women are part of the omegaverse, and female alphas have penises. Also it's kind more like dog sex or wolf sex with ‘knotting’ and stuff.”

But that’s not the only dung flung by BuzzFeed over recent years.

BuzzFeed “senior culture writer” Scaachi Koul even wielded Scripture to wokescold Toobin’s critics: “Haven’t we all done something on a work call that, in normal circumstances, we’d never do during a meeting? Let he without sin cast the first stone.”