Big Tech censors: We know what we’re doing. Their algorithms: April Fools! It’s a tall task for Big Tech companies to justify mashing the censorship button on conservative speech when the systems they use to do their dirty work are so stupid that they always come back to kick them in the pants. 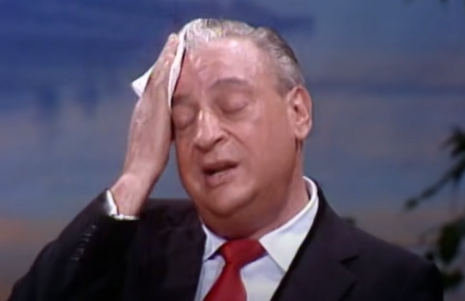 MRC Free Speech America has logged over a whopping 3,500 cases of censorship into its CensorTrack database. But some of the cases were so flat-out ridiculous that they undermine the whole system of censorship and so-called fact-checking.

MRC Free Speech America combed through CensorTrack to unearth the top five most ridiculous cases of censorship currently logged in our database. Those ranged from Facebook getting upset with a gardening group because they used the word “hoe” to Twitter having a meltdown over a Clint Eastwood movie title because the Western jargon it used constituted so-called “abuse and harassment.”

It’s one thing for Big Tech companies to whip out their censorship tridents of truthspeak to target conservatives they don't agree with. It’s another thing entirely when their tridents are feckless and poorly crafted. To quote comedian Rodney Dangerfield, “Just last week a guy pulled a knife on me. I could see it wasn’t a real professional job — there was butter on it.”

Here are the Top 5 Dumbest Cases of Censorship found in CensorTrack’s database:

Hollywood star Clint Eastwood’s 91st birthday was May 31, 2021, and users took to Twitter to celebrate. One user celebrated Clint Eastwood's 91st birthday by asking other users to name their favorite Eastwood movie. Another user replied with "Hang em High,” which led to Twitter demanding the user delete the tweet and restricting his account for an unknown period of time. Twitter deemed that posting the name of one of Eastwood’s iconic films violated its "rules against abuse and harassment."

Users of the "Love Norfolk Broads" Facebook page had their accounts restricted when they mentioned "fishing sites at the Dyke at Cockshoot Broad." Here’s the problem: The “Dyke at Cockshoot Broad” is the name of a scenic tourist spot in the United Kingdom. Users who mentioned the name of the tourist spot received notices that their posts contained “violence and sexual content,” according to the New York Post.

As the Post pointed out: "the name isn’t even inappropriate in British vernacular. 'Cockshoot' is actually a hunting term that refers to the pursuit of a wading bird called the woodcock. Meanwhile, 'dyke' in this context simply means a barrier used to regulate or hold back water from a river, lake or even the ocean."  Facebook reportedly apologized for the error but its behavior does reveal a glaring reality: The platform is willing to even sexualize benign content to justify its braindead censorship operation. This is what happens when Big Tech speech controls are built on the irony of artificial intelligence being written by dim-witted humans.

YouTuber Tyler Zed tweeted that he posted a satirical Halloween photo on Instagram of "HalloWieners: Black Licorice Flavored Hot Dogs." Instagram placed a filter over the photo with a link to a USA Today fact-check, and accused Zed of posting an "altered photo." USA Today headlined its fact-check: "Despite viral image, Oscar Mayer is not selling black licorice hot dogs called 'Hallowieners.'" Wow, what a scoop. So apparently Instagram treated its users as if they were too dumb to figure out the photo Zed posted was a joke.

A Twitter user posted a screenshot of a notice he said he received from the platform alerting him that it locked his account and placed it in a read-only restricted mode for an unknown length of time as punishment. His offense: He had the nerve to tweet at The Washington Capitals during Game 4 of the Stanley Cup First Round against the Boston Bruins: “@Capitals @Lexus SHOOT THE PUCK." Twitter determined that his tweet violated its rules against "abuse and harassment.” Brilliant, so actually “SHOOT[ING] THE PUCK” could be considered murder in the first degree by Twitter’s logic. Clearly it is NOT okay for fans to vent frustrations about their teams if the word “shoot” is involved. Basketball fans beware.

Facebook flagged posts that used the word "hoe" in a group called WNY Gardeners when users referred to the useful weeding tool. The censorship was so stupid that even The Associated Press ran a story headlined: “Hoe no! Facebook snafu spells trouble for gardening group.” As AP reported, “Facebook’s algorithms sometimes flag this particular word as ‘violating community standards,’ apparently referring to a different word, one without an ‘e’ at the end that is nonetheless often misspelled as the garden tool.” Facebook apparently created an illiterate censorship algorithm with an innately filthy mind.

Conclusion: Big Tech Has No Idea What It’s Doing.

It’s bad enough that Big Tech companies make a point to censor conservatives simply because they don’t agree with them. It was even worse when people who said something about COVID-19 that Big Tech didn’t like started getting eliminated from social media. But it’s a higher level of Orwellian crazy when the algorithms governing the bloated censorship operations are less intuitive than a bag of hammers.