Orwell Turns Over in His Grave: CensorTrack Logs 3,500 Censorship Cases by Big Tech 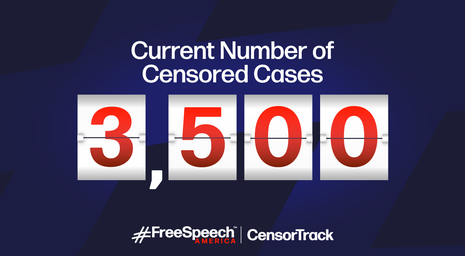 CensorTrack has now surpassed 3,500 total censorship cases documented by the MRC Free Speech America team. People and accounts across the internet were suppressed for various reasons, including COVID-19 commentary, criticism of President Joe Biden, election-related content, and much more. One reality is clear, censorship algorithms will target anyone who disagrees with established narratives, regardless of their status.

The worst case of documented COVID-19 censorship came from Facebook. The platform deleted the Great Barrington Declaration’s account page. Prominent international disease experts developed the declaration to oppose harsh COVID-19 lockdowns imposed on citizens by many national governments, including the implementation of measures shown to have “little to no effect” on COVID-19 mortality, according to a recent Johns Hopkins University study.

The Hopkins study underscored how unjustifiable Facebook’s deletion of the pro-freedom Great Barrington Declaration page was. Removed about a year ago, the declaration was later proved to be accurate. The declaration discussed the pro-freedom viewpoints of those against lockdowns and has garnered over 928,000 signatures in support of its argument: “Current lockdown policies are producing devastating effects on short and long-term public health.” The signatories include over 15,000 medical and public health scientists and over 46,000 medical practitioners.

One action this week displays the extremity of Big Tech’s biased war against free speech.

Facebook placed an interstitial, or filter, over Heritage Action’s video, suppressing the post’s reach. The video showed Biden and his administration explaining how his policies would cause gas prices to rise.

The interstitial labeled the video as “Missing context” and links to a fact-check in hopes of discrediting it. Heritage Action’s video also dared to include an interview showing Energy Secretary Jennifer Granholm laughing when asked about Biden’s oil drilling policy. The video then shows a series of clips of Biden proclaiming he will stop domestic drilling on federal land and offshore facilities.