Purged? Social Media Influencer An0maly Asks If Big Tech Is ‘Working Together’ to Censor Him

Social media influencer An0maly blasted Big Tech giants Instagram and TikTok, asking whether they worked in cahoots to silence him on their platforms. 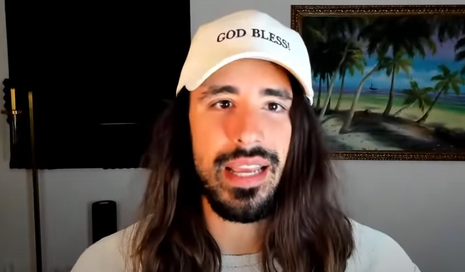 Both Instagram and Communist Chinese app TikTok both targeted An0maly for his videos on their respective platforms, according to purported screenshots from the social media influencer. An0maly told MRC Free Speech America that Instagram in particular demonetized him because of three of his videos. The videos simply reiterated media reports from outlets like The Hill and The Wall Street Journal about the ongoing war in Ukraine that Instagram's censors apparently didn’t like. In the most ridiculous case, An0maly said he was demonetized in part for a video in which he criticized Instagram and its sister company Facebook for reportedly allowing “calls for violence against Russians" on their platforms, according to The Hill. Instagram must not have appreciated being put on blast. An0maly said it flagged the clip, which is especially hypocritical given the platform's ban of former President Donald Trump following the Jan. 6, 2021, Capitol riot, despite Trump’s call for peace.

An0maly excoriated the censorship on Twitter: “BREAKING: I just had my @Instagram (@InstagramComms) account demonetized for accurately reporting in the Russia/Ukraine conflict.” He continued: “I’ve also now been suspended from posting to Tik Tok at the same exact time (@TikTokSupport) Are they working together with @InstagramComms to purge my ability to report on Russia & Ukraine?”

I will post the three videos they flagged below.

In one video, An0maly quoted a report from The Hill on Meta allowing calls for violence against “Russians.” The Hill reported that “Facebook and Instagram will temporarily allow users in some countries to call for violence against Russians and Russian soldiers within the context of the war in Ukraine.” He followed up this quote by pointing to a tweet by the Libertarian Party Mises Caucus rebuking Instagram and Facebook, which read: “Big Tech making exceptions for ‘incitement’ is yet another piece of the corporatist social control puzzle being assembled around Russia. And it WILL be turned inward.” He said the clip was enough for Instagram to accuse him of a “Content Monetization Policy Violation.”

How does accurately reporting on the Russia/Ukraine conflict violate your policies?

I can prove these are accurate. What’s up? pic.twitter.com/M9Yb8S1mqU

Here’s An0maly’s video on Instagram’s special exception to its policies on calls to violence:

An0maly shared another purported screenshot that indicated TikTok prevented him from posting any content until March 15 for a video that called out the hypocrisy of celebrities attending the Oscars not needing to show vaccine proof; another that ripped the Canadian government-funded Canadian Broadcasting Corporation (CBC) for demonizing the Freedom Convoy protesters; and, one more that blasted Rep. Elissa Slotkin (D-MI) for posting a maskless selfie amidst a group of masked constituents. The screenshot showed he was restricted from posting any material due to “multiple violations against our Community Guidelines.”

An0maly’s video blasting the CBC on TikTok was centered around a propaganda piece by the publication about how the word “freedom” has become “common among far-right groups.” An0maly pointed out how the CBC reportedly received $1.4 billion from the Canadian government in 2021, emphasizing the outlet is nothing but state-run media doing the bidding of far-left Prime Minister Justin Trudeau. The prime minister wielded authoritarian power to aggressively crack down on protesters who stood against his draconian COVID-19 vaccine mandates.

MRC Free Speech America reached out to Meta for comment but has received no response as of the publication of this article.