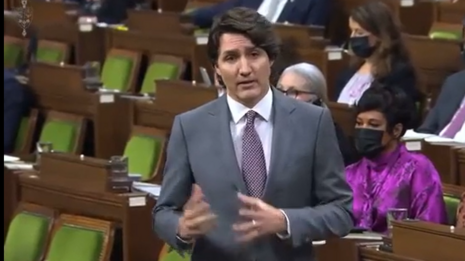 As the protesting Canadian truckers’ blockade over vaccine mandates enters its third week, the New York Times remains breezily supportive of their socialist dreamboat Canadian Prime Minister Justin Trudeau and his authoritarian crackdown on COVID protests, including even the deployment of troops.

What? That's not even two years after forcing out opinion editor James Bennet for running an op-ed by Sen. Tom Cotton (never published on paper) which recommended sending in troops to quell actual rioting in American cities.

But Times reporters Ian Austen and Dan Bilefsky helpfully channeled "some critics" to want a millitary crackdown in a story headlined “Trudeau Declares an Emergency, Invoking Powers to Quell Unrest.”

The response by the police and all levels of government to the crisis, which included an almost weeklong blockade of an economically critical border crossing with the United States, has been widely criticized as inadequate. Mr. Trudeau, some critics contend, should have intervened earlier and perhaps even deployed troops to break up the protest.

Authoritarianism run amok? Not to the Times, which simply nods along. And can one even begin to contemplate the media's collective frenzy if President Trump had tried to get the accounts of BLM leaders or rioters frozen?

Mr. Trudeau and several of his cabinet ministers said the move would allow the government to take a variety of steps, including freezing bank accounts of protesters, to clear the blockade of about 400 trucks in Ottawa and smaller protests that have closed border points in Alberta and Manitoba.

The police will be exchanging information with banks about protesters, and their personal and business accounts may be frozen. Insurance companies will be required to revoke insurance on any vehicles used in blockades.

Suddenly the paper loves crackdowns in the name of "national security." Who knew?

This is all the outrage the paper could muster about Trudeau’s tyrannical move to disrupt the financial survival of his political opponents: They "may be problematic."

Leah West, a professor who studies national security law at Carleton University, said she believed some of the restrictions on rights introduced by the law, like those on movement, are acceptable under Canada’s Charter of Rights and Freedoms. But she said the financial measures may be more problematic.

Many Canadians, and Ottawa residents in particular, have shown increasing impatience over what they view as an anemic police response to the protests, which began as a truck convoy in the western province of British Columbia and reached the capital on Jan. 29. While there has been little physical violence, lives in the areas surrounding the Parliament have been disrupted and the police are investigating several complaints of hate crimes and harassment.

The bar has certainly been lowered on inappropriate behavior since the Black Lives Matter-related rioting and looting. Now even “public drinking” is frowned upon.

Protesters, whose numbers swell on weekends, have desecrated the national war memorial, and legal violations like public drinking are widespread. An upscale shopping mall just blocks from Parliament is now into its third week of closure. Stores there have lost tens of millions of dollars in sales and about 1,500 workers lost wages.

Canada has been in various states of coronavirus shutdown for two years; isn’t it a bit much to start complaining about closures now?

The unrest seems a rebuff to the cherished mythology imposed on Canada’s citizens from abroad and held by many Canadians themselves as moderate, rule-following, levelheaded -- and just plain nice….Canadian politics may in fact be more genteel than in many other places, but not because Canadians are innately kinder. That has just become a lot clearer.