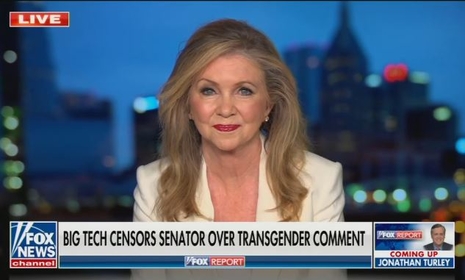 The platform removed Blackburn’s post for violating its alleged hate speech policy. “Big Tech is censoring me for stating the obvious fact that women are different from men, and men do not belong in women's sports,” Blackburn told MRC Free Speech America in an exclusive comment Monday. “I'll never let these Leftists intimidate me into silence." Facebook restored the post by Monday afternoon.

The senator posted the phrase “[b]iological men have no place in women's sports," along with a fundraising link. It appears that Facebook allowed Blackburn’s post to remain on her campaign Facebook page for two months before briefly removing it.

Facebook removed the post because it allegedly "didn't follow [its] Community Standards on hate speech," according to a screenshot of the notice included in a Fox News Digital report. "No one else can see your post.”

The platform’s hate speech policy forbids “a direct attack against people — rather than concepts or institutions – on the basis of what we call protected characteristics: … sexual orientation, sex, gender identity and serious disease.” Facebook broadly defines “attacks” as “violent or dehumanizing speech, harmful stereotypes, statements of inferiority, expressions of contempt, disgust or dismissal, cursing and calls for exclusion or segregation.”

Blackburn, however, clearly isn’t afraid of Big Tech. She repeated her apparently forbidden declaration that “men have no place in women's sports" in a new Facebook post on Friday after the platform already removed the original post. She added, “I won’t stop saying it no matter how much Big Tech tries to silence me.”

The senator has repeatedly defended women’s sports on social media and stirred some attention when she asked then-Supreme Court nominee Ketanji Brown Jackson to define the word “woman.” “The radical Left will clearly stop at nothing to implement their extreme agenda,” Blackburn said in an email to MRC Free Speech America. “Biden's Supreme Court nominee refused to define the word 'woman' when I asked her.”

Facebook did not respond to MRC Free Speech America’s request for comment by the time of publication.