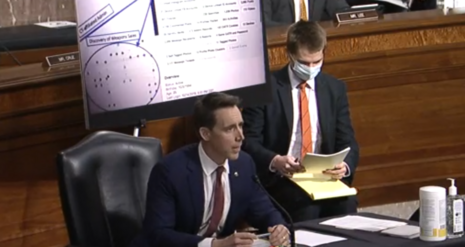 “You’re the robber barons,” said Hawley to both Twitter CEO Jack Dorsey and Facebook CEO Mark Zuckerberg. “Your companies are the most powerful companies in the world and I’m going to talk about how you’re coordinating together to control information.”

Hawley said that his office had been contacted by a “Facebook whistleblower,” a former company employee. The senator referenced a Facebook internal platform called Tasks “that Facebook uses to coordinate projects including censorship.” He continued, saying that this internal platform was used by several teams within Facebook to discuss what hashtags, pages, and individuals to ban.

When Hawley asked Zuckerberg if he was familiar with the task platform, the CEO stumbled his way through an answer. “Let’s see if we can refresh your memory,” said Hawley. He then showed a screenshot of the platform over his shoulder.

Memory clearly irked Senator Hawley, as he commented to Chairman Lindsay Graham (R-SC) “It’s always amazing to me, Mr. Chairman, how many suddenly develop amnesia. Maybe it is something about the air in the room.”

“What particularly intrigued me,” said the senator, “is that the platform reflects censorship input from Google and Twitter as well.” He continued, “Facebook’s censorship teams communicate with their counterparts at Twitter and Google and then enter those companies’ suggestions for censorship onto the task platform so that Facebook can then follow up with them and effectively coordinate their censorship efforts.”

Zuckerberg responded that Facebook did coordinate with both Google and Twitter, but only about “security-related topics.” He tried to emphasize that this sharing of signals was “distinct from the content moderation policies that we or the other companies have.” When Hawley asked for a yes or no answer, Zuckerberg said, “Senator, we do not coordinate our policies.” However, when Hawley asked if the content moderation teams communicated with teams at Twitter or Google, Zuckerberg answered, “I’m not aware of anything specific.” He then said, “I would expect that some level of communication probably happens.”

Hawley responded, “Well fortunately I understand that the Tasks platform is indeed searchable. So will you provide a list of every mention of Google or Twitter from the Tasks platform to this committee?” Zuckerberg refused to commit to providing a list, saying instead that he would follow up with the committee afterward. “I don’t think it would be wise for me to commit to that now,” he answered.

Hawley then asked if Facebook would provide a list of every hashtag, site, or individual that Facebook’s content moderation team had discussed banning. Zuckerberg said he would be happy to follow up. Hawley interrupted, saying, “Senator Cruz and Senator Lee have both asked you for lists of individuals, websites, entities that have been subject to content moderation. You expressed doubt about whether any such information exists, but you’ve acknowledged the Tasks platform exists.” He asked again if Zuckerberg would commit to providing a list. The Facebook CEO tried to dodge.

“We could of course have subpoenaed this information,” said Hawley, “but I’d much rather get it from you voluntarily. But I think -- let everybody take note -- that Mr. Zuckerberg has repeatedly refused to provide information that he knows that he has and has now acknowledged that he has, that Tasks has under oath.”