Facebook claims it wants to promote racial equality by “elevating Black voices.” But if those voices promote conservative content, then Facebook does not want to elevate it.

The Hodgetwins, who market themselves as conservative comedians, received a notification on August 28 from Facebook which stated, “Your page is at risk of being unpublished because of continued Community Standard violations.” Below the message, three pieces of content had been removed. One was a video with the title, “Liberal has mental breakdown.” Another video, found on YouTube, was titled “AOC YOU CRAZY!” 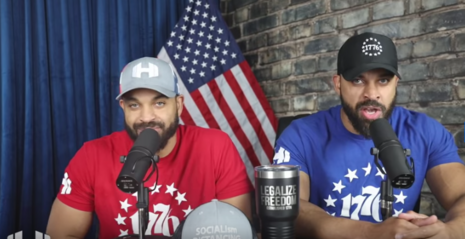 In the video “AOC YOU CRAZY!”, the twins make statements about Rep. Alexandria Ocasio-Cortez, (D-NY) including: “Man how the hell did she get out of high school,” and “She’s got a Ph.D, a Ph.D in stupidity.”Meanwhile, Facebook allows many anti-Trump statements to stay online.

“If you haven’t heard,” said a Hodge brother in a video posted on Twitter, “we’re on the verge of having our Facebook page unpublished.”

The New York Times had published a piece on the same day that stated that the Hodgetwins had some of the most shared posts on Facebook. “The most-shared Facebook post containing the term ‘Black Lives Matter’ over the past six months is a June video by the right-wing commentators The Hodgetwins, which calls the racial justice movement a ‘damn lie,’” wrote The Times technology columnist Kevin Roose.

Roose based his assumptions on the idea that shares, follows, and comments meant that people agreed with the content being put out. Even he admitted, “Facebook has argued that engagement isn’t the same thing as popularity.”

Another conservative Black creator, Mark Lutchman, complained on Twitter that his video on Facebook had been taken down on the same day.

Conservative commentator Candace Owens told Breitbart that she was suing Facebook over a fact-check of one of her posts. When a post is fact-checked and found “false” or “partly false,” the post and the page are suppressed for thirty days. “Once a fact-checker rates a piece of content as False, Altered or Partly False, it will appear lower in News Feed, be filtered out of Explore on Instagram, and be featured less prominently in Feed and Stories,” wrote Facebook.

Owens had written, “I am SO EXCITED that we get to watch [Kamala Harris], who swore into congress as an ‘Indian-American’, now play the ‘I’m a black a woman’ card all the way until November.’” The Associated Press had a fact-check that was applied to that post.

Conservative African-American voices are under attack. Contact Facebook at 650-543-4800 and demand that Big Tech be held to account to mirror the First Amendment while providing transparency, clarity on “hate speech” and equal footing for conservatives. If you have been censored, contact us at the Media Research Center contact form, and help us hold Big Tech accountable.