A popular video featuring California emergency doctors Dan Erickson and Artin Massihi was taken down by YouTube for “violating YouTube’s terms of service.”

Based on their own research, the hour-long conference asked, “Does this make sense? Are we following the science?” Towards the end of the video, Erickson said, “Do we need to still shelter in place? Our answer is emphatically no. Do we need businesses to be shut down? Emphatically no. Do we need to test them and get them back to work? Absolutely.” The initial video was removed by YouTube on April 27, 2020, for content that “explicitly disputes the efficacy of local healthy authority recommended guidance on social distancing that may lead others to act against that guidance.” 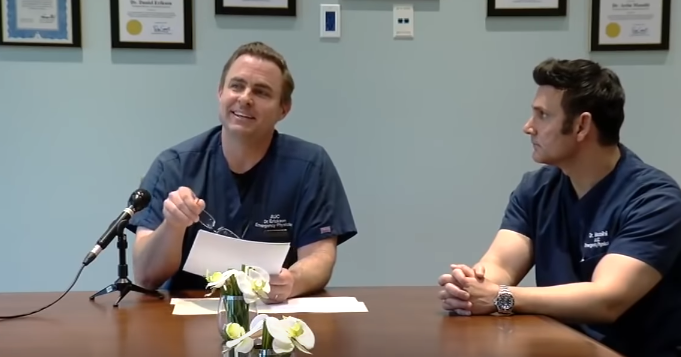 A Google spokesperson told ABC reporter Bayan Wang that, “We quickly remove flagged content that violate our Community Guidelines.” The video removed was from the local ABC affiliate. Before its removal, it had apparently received more than five million views, according to Fox News Channel host Tucker Carlson on Tuesday night.

The American College of Emergency Physicians (ACEP) and the American Academy of Emergency Medicine (AAEM) released a statement condemning Erickson and Massihi. “These reckless and untested musings do not speak for medical societies and are inconsistent with current science and epidemiology regarding COVID-19,” the joint statement said.

However, Erickson and Massihi seemed to only question the reasoning behind the quarantines and the shutdowns. “We’ve never seen where we quarantine the healthy,” they said, resting on twenty years of experience. The doctors mentioned that the travel bans and the shutdowns made sense “when you don’t have any facts.”

The Daily Beast asserted with confidence that these doctors “don’t appear to have any significant epidemiological experience.” Yet major figures such as Tesla CEO Elon Musk said that the doctors “make good points.”

YouTube took down another video exploring the possibility of curing COVID-19 with “ultraviolet light.” In an interview with CNN’s Brian Stelter, YouTube CEO Susan Wojcicki said, “Anything that would go against World Health Organization [WHO] recommendations would be a violation of our policy.”