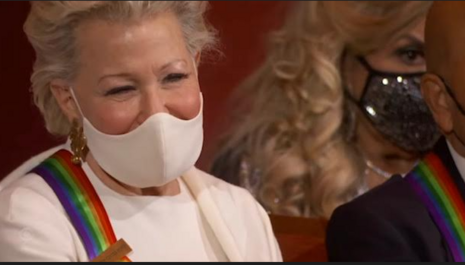 The leftist group PatriotTakes was part of the release of a controversial video that attacked podcasting star Joe Rogan. PatriotTakes just happens to be reportedly partnered with leftist SuperPAC MeidasTouch, which was funded by actress Bette Midler.

PatriotTakes, which claims to be a partner of MeidasTouch and bills itself as “exposing right-wing extremism,” has aggressively attacked Rogan. PatriotTakes states among other accusations that Rogan used the N-word repeatedly.  Anti-Trumpers Ben, Brett, and Jordan Meiselas, dubbed the “Meidas brothers,” founded MeidasTouch.  But MeidasTouch reportedly has skeletons in its closet, which makes the PatriotTakes hit job on Rogan hypocritical.

Barstool Sports founder Dave Portnoy pointed out PatriotTakes’ partnership with the openly leftist, anti-Trump MeidasTouch SuperPAC. Portnoy said while having a virtual debate with the Meiselas brothers that he had “definitive proof” one of them casually used the N-word.

MeidasTouch is a Democrat SuperPAC (Super Political Action Committee) with the ironic motto, “Because Truth Is Golden.” The Meiselas brothers aimed to produce anti-Trump content and had collected over $300,000 by July 2020, soon after the SuperPAC’s founding, according to CNN. It appears Midler was looking to take advantage of MeidasTouch’s propaganda campaign.

Midler has collaborated more than once with MeidasTouch to produce brazen propaganda videos, according to MeidasTouch itself. One video from February 2021 with Midler doing vocals claimed (with explicit language) that Sens. Ted Cruz (R-TX) and Josh Hawley (R-MO), among several other Republican lawmakers, encouraged “insurrections” and ought to be locked up. The video ends with a snapshot of America being “great again without” the Republicans with a person waving a Biden 2020 flag. Another video that MeidasTouch proudly touted on its website, produced “in collaboration with Bette Midler,” was a petty and vindictive attack on then-President Donald Trump, from his hair to his tweets. It ends with the phrase, “Vote For Joe Biden.” MeidasTouch’s article called Trump “the most dangerous threat facing the country.” [Emphasis added.]

MeidasTouch has since tried to claim it did not coordinate any attack on Joe Rogan and that it does not believe in “cancel[ing]” people in a tweet thread.

Midler’s reaction after the death of conservative talk radio icon Rush Limbaugh was to label him a member of the Ku Klux Klan. She recently called West Virginians “Poor, illiterate and strung out” while on a screed against Sen. Joe Manchin (D-WV) for holding up Joe Biden’s massive $1.75 trillion “Build Back Better” bill. The actress further called for physical violence against Sen. Rand Paul (R-KY) in 2018, when his delay of a Senate vote caused a brief government shutdown.  But Midler is not the only notable Hollywood leftist to be a MeidasTouch donor. CBS’s The Price Is Right host Drew Carey also donated at least $20,000 to the SuperPAC, FEC records indicate. The Price Is Right aired a special show in May 2020 featuring drag queen RuPaul, as a stunt to raise money for abortion giant Planned Parenthood.

MRC Free Speech America reached out to CBS for comment on Carey’s donations but has received no response as of the publication of this article.

Conservatives are under attack. Contact your representatives and demand they hold Big Tech to account to provide transparency on hate speech and equal footing for conservatives. If you have been censored, contact us using CensorTrack’s contact form, and help us hold Big Tech accountable.