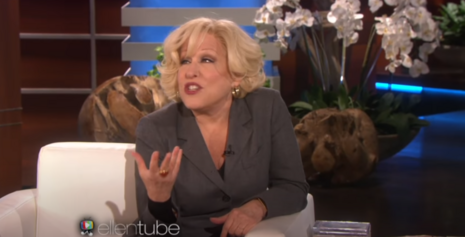 Bette Midler has an interesting standard for when it is okay to disrespect the dead and who is allowed to do it. Monday night Midler posted a tweet equating Rush Limbaugh with Ku Klux Klan members. Just 24 hours earlier she complained that Donald Trump Jr.’s video content was some subtle campaign effort to steal Limbaugh’s radio slot.

Midler’s ridiculous tweet is a political cartoon that depicts a crowd of Klansmen with the words “Find Rush Limbaugh.” Limbaugh is supposed to be distinguishable from the rest by his Presidential Medal of Freedom, the highest civilian honor, which former president Trump offered him last February during the State of the Union address.

The cartoon was originally created by Ron Hauge who produced many episodes of The Simpsons and is known for his anti-Trump and anti-GOP cartoons. Hauge posted this particular cartoon piece to Instagram within 24 hours of Limbaugh’s death with the caption “too soon?” Well, it wasn’t too soon for Midler to tweet the image five days later.

The day before, Midler criticized Donald Trump Jr. for posting a video shortly after Limbaugh’s death. She thought his media content, which had nothing to do with Limbaugh, was “angling for his spot. ” Apparently he should have waited a few more days until Sheriff Midler decided it was ok to post regular conservative video content again. Ironically, nobody is stealing Limbaugh’s spot any time soon. According to an affiliate of Premiere Radio Networks, which distributed The Rush Limbaugh Show, episodes and segments will continue to air “until his audience is prepared to say goodbye.”

Effing #RushLimbaugh isn't even cold in his grave and #TheFormerGuy's son is angling for his spot. Sheesh. https://t.co/7y5xJ6mDJ9

Bette’s nonsensical posts come as no surprise as she is constantly tweeting out ignorant criticism and hypocrisy. Just last week she claimed that the recent devastating ice storm was clearly God punishing Texans for electing two Republican senators. She said Trump’s acquittal means “he got away with murder.” And this time she demonstrated that this week’s “rules” for respecting the dead didn’t apply to her last week when tweeted her own judgment of Limbaugh’s soul the day he passed away. Rules for thee but not for me.

Well, it seems Hollywood’s prominent leftists will never read the rule book of common decency instead they’ll tweet what they think should be in it as they go along. Maybe next week we’ll see some new addendums, asterisks and leftist dispensations.