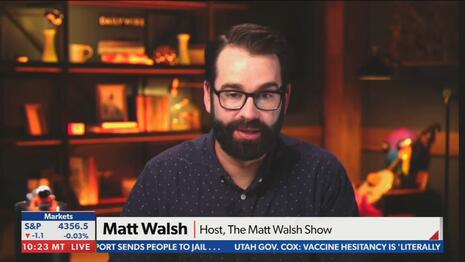 On Friday, The Daily Wire’s Matt Walsh was suspended from Twitter for daring to tweet about transgenderism in light of their dominance over female records in everything from Jeopardy! to female sports.

“The greatest female Jeopardy champion of all time is a man,” Walsh tweeted. “The top female college swimmer is a man. The first female four star admiral in the Public Health Service is a man. Men have dominated female high school track and the female MMA circuit. The patriarchy wins in the end.”

Walsh doubled down, adding: “I am not referring to an individual person as if she is two people. Everyone else can run around sounding like maniacs if they want but I will not be participating. No thank you.”

His twelve-hour ban starts after he deletes the tweets, but in discussing his Twitter suspension with Tucker Carlson on Fox News, he said he was “suspended...because I pointed out that biological males are men.”

He added: “And this, to me, is all apart of the game here. That this is what leftism is. If you criticize it, then they’re gonna shut you down because they realize that they cannot engage intellectually.”

In response to the suspension, he later joined GETTR, a free speech alternative social media platform.