Blaze Media’s Allie Beth Stuckey was locked out of her Twitter account on Thursday after she tweeted that Olympian Laurel Hubbard is “still a man.” 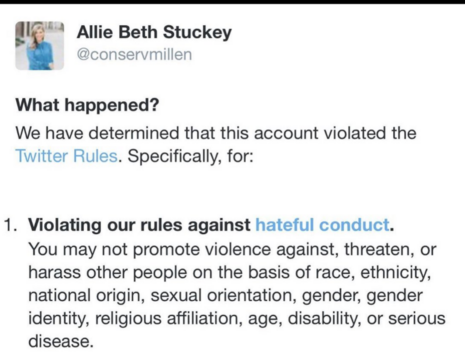 Hubbard, a New Zealand weightlifter, is a transgender woman who competed in the 2020 Tokyo Olympics.

“Laura Hubbard failing at the even doesn’t make his inclusion fair,” she tweeted after Hubbard’s lackluster performance. “He’s still a man, and men shouldn’t compete against women in weightlifting.”

“You may not promote violence against, threaten, or harass other people on the basis of race, ethnicity, national origin, sexual orientation, gender, gender identity, religious affiliation, age, disability, or serious disease,” Twitter’s message to Stuckey read.

TheBlaze is standing behind Stuckey, tweeting a jab at Twitter after the suspension.

For her part, Stuckey is not backing down from her beliefs.

“Twitter has suspended me for 12 hours for saying Laurel Hubbard is a man, which is objectively true,” she posted on Instagram. “What’s that Orwell quote? Something about the further people get from the truth the more people will hate those who say it?"