Guerilla journalist and Project Veritas founder James O’Keefe released a video tweet exposing Twitter leadership’s “Plans For Political Censorship On Global Scale” on Jan. 18. O’Keefe’s tweet specifically noted that Twitter leadership is cracking down on what they call “misleading information or coded rhetoric.” Twitter’s Legal, Policy and Trust & Safety Lead Vijaya Gadde could be heard in the footage saying that Twitter must go “Beyond de-amplification” and spoke of “conspiracy theories,” alleging the platform will be “permanently suspending those accounts.”

“The statements appeared to be related to Twitter’s massive purge of 70,000 QAnon-related accounts in the wake of the deadly Jan. 6 riot,” the New York Post theorized. The video allegedly showed a virtual conference that took place on Jan. 8, the same day sitting President Donald Trump was permanently suspended from Twitter.

Gadde proclaimed, “Whether we believe Trump’s tweets are inciting violence and having real-world harm, I think that we’ve seen that, in fact, they are.” Gadde can also be heard in the clip suggesting: “we’ve seen violence unfold as a result of either misleading information or coded rhetoric.” She went on to explain: “So a lot of our learnings here have come from other markets. So in that sense, we do feel like it is — this is our global approach.” 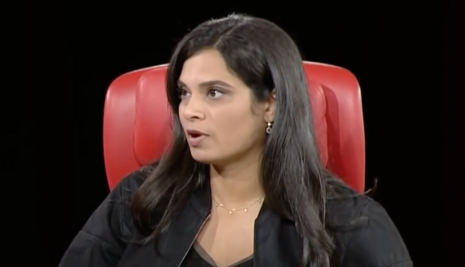 Twitter founder and CEO Jack Dorsey defended the platform’s decision to ban Trump in a 13-tweet Twitter thread. Dorsey claimed he did “not celebrate or feel pride in our having to ban @realDonaldTrump from Twitter, or how we got here. After a clear warning we’d take this action, we made a decision with the best information we had based on threats to physical safety both on and off Twitter. Was this correct?”

In a video later released by Project Veritas on Jan. 14, Dorsey sounded decidedly less hesitant about mass censorship: “This is going to be much bigger than just one account [Trump’s] and it's going to go on for much longer than just this day this week. And the next few weeks and go on beyond the inauguration.”