President Donald Trump has once again been shafted by Big Tech tyrants for expressing genuine concern that the election may be getting rigged against him.

Twitter placed an interstitial, or filter, over a November 4 Trump tweet that said: “Some or all of the content shared in this Tweet is disputed and might be misleading about an election or other civic process. Learn more.” Trump’s tweet claimed: “Last night I was leading, often solidly, in many key States, in almost all instances Democrat run & controlled. Then, one by one, they started to magically disappear as surprise ballot dumps were counted. VERY STRANGE, and the ‘pollsters’ got it completely & historically wrong!”

Even after having clicked the interstitial, users saw Trump’s tweet was still labelled with warnings. “Some or all of the content shared in this Tweet is disputed and might be misleading about an election or other civic process. Learn more,” noted the Twitter warning. Another warning appeared below with an exclamation mark saying: “Learn about US 2020 election security efforts.” 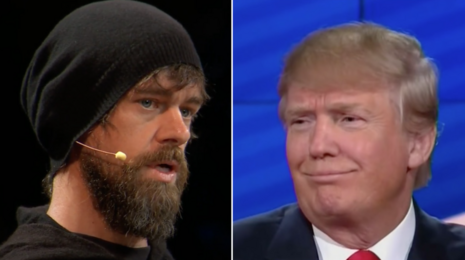 Upon trying to retweet Trump’s tweet, Twitter sends a pop-up that requires the user to click through again to quote-tweet. The pop-up urges the following: “Learn about US 2020 election security efforts.”

Essentially, Twitter has prevented Trump’s supporters from being able to demonstrate support for the tweet with “Likes,” and have made it susceptible to being “ratioed” by his detractors. Getting “ratioed,” “[g]enerally speaking, [means] the more replies a tweet gets over likes or retweets, the worse it is,” Merriam-Webster’s Words We’re Watching blog explained.

Twitter censored another Trump tweet in the same manner only a few hours later. At 12:01 PM Trump declared: “They are working hard to make up 500,000 vote advantage in Pennsylvania disappear — ASAP. Likewise, Michigan and others!” Trump was also censored for a 12:49 AM tweet in which he proclaimed: “We are up BIG, but they are trying to STEAL the Election. We will never let them do it. Votes cannot be cast after the Polls are closed!”

Twitter’s use of a warning label and preventing likes for a certain post has occurred multiple times in recent weeks.

Twitter also censored a November 4 tweet by Trump asking: “WHAT IS THIS ALL ABOUT?” regarding a post by The Daily Wire columnist Matt Walsh, where Walsh expressed skepticism over 128k recently discovered Michigan ballots all for Biden. Walsh suggested that “This is reason enough to go to court. No honest person can look at this and say it's normal and unconcerning.”

Big Tech has been censoring conservatives in an effort to protect Democratic nominee Joe Biden.