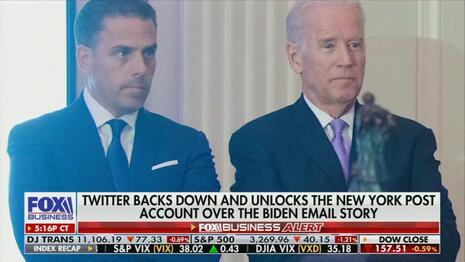 For over two weeks, Twitter locked down the New York Post's official account because of the newspaper’s reporting on the alleged corrupt dealings of Democrat presidential nominee Joe Biden and his son, Hunter. But on Friday afternoon the Post was finally set free from Twitter jail.

The move came after The Post refused Twitter’s demand that it delete six tweets that linked to stories that the company claimed — without any evidence — were based on hacked information.

Initially, Twitter blocked the link to the October 14 Biden exposé completely and shut down the account of anyone who tweeted it until they deleted it, claiming the story violated their policy on hacked information. Twitter later allowed the link to be shared, tweeting: “1. We will no longer remove hacked content unless it is directly shared by hackers or those acting in concert with them. 2. We will label Tweets to provide context instead of blocking links from being shared on Twitter.”

However, for some reason, this new policy did not apply to tweets that had already been posted. A Twitter representative emailed them on October 16, “While we’ve updated the policy, we don’t change enforcement retroactively. You will still need to delete the Tweets to regain access to your account.”

Our policies are living documents. We're willing to update and adjust them when we encounter new scenarios or receive important feedback from the public. One such example is the recent change to our Hacked Materials Policy and its impact on accounts like the New York Post.

In response, we’re updating our practice of not retroactively overturning prior enforcement. Decisions made under policies that are subsequently changed & published can now be appealed if the account at issue is a driver of that change. We believe this is fair and appropriate.

This was just the latest in almost 30 changes Big Tech has made altering their policies regarding election-related content.

Post op-ed editor Sohrab Ahmari tweeted in response to the Twitter Safety tweet, "As early as this afternoon, prominent journalists [!] were urging us to back down in the face of lefty-tech-bro bullying. The lesson: Never, ever give up when you have truth on your side."

1. We never posted hacked material.
2. If reporting has to be approved by subject of the story, all journalism becomes p.r.
3. @jack and Zuck testified under oath that neither has ANY evidence this was hacked material.
4. DNI, FBI and State say no disinformation.

This was some rare good news on the social media front, but with the election only days away, beware what other tricks Big Tech has up its sleeve to push Biden over the top.