Report: Ex-Editor Calls Out Wikipedia for Its War Against Mark Levin

A former Wikipedia editor blasted Wikipedia for not being neutral, and slammed the platform for a multi-year scorched-earth campaign against popular conservative talk radio host Mark Levin.

A massive exposé accusing Wikipedia of having biased editors was put out by Breitbart News. “Localemediamonitor” and “Snooganssnoogans,” according to Breitbart, have been allowed to run rampant on conservative Wikipedia entries. That included their jihad against Levin.

The banned Wikipedia editor wrote at Breitbart under the alias T.D. Adler. He noted Wikipedia’s failure to stop this had massive consequences. “Negative material added by both editors eventually found its way to news coverage of Levin, particularly around the time his show at Fox News was announced and premiered,” wrote Adler. A staff writer from the Forward, Nathan Guttman, admitted to Adler that he “probably uses Wikipedia when researching articles.” 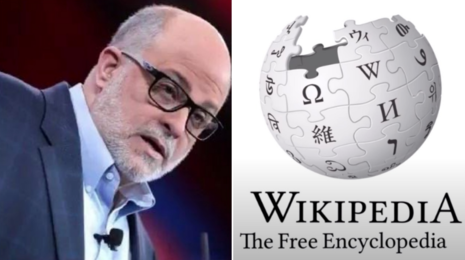 The Breitbart article asserted that “editors on Wikipedia began to attack Levin’s credibility through edits to his page on the site.” That happened after he had criticized the “police-state tactics” of the Obama administration for using intercepts and FISA warrants. The article summarized how this had consequences which even now are shaking up politics:

The criticism, which allegedly prompted President Donald Trump’s controversial wire-tapping allegations, has since been vindicated by revelations about widespread falsehoods in FISA warrants issued against Trump campaign adviser Carter Page, seen now as part of a broader Obamagate scandal. A number of attacks on Levin eventually ended up in news articles shortly before and after the premiere of his show on Fox News.

Levin has squared off against Wikipedia before. Breitbart recounted that in 2018 Levin broadcasted an entire segment reading from his slanted Wikipedia entry and lamenting how Wikipedia is a place “where people who hate you ... can go into your page and poison it.”

One of the Wikipedia editors, Localemediamonitor, was criticized by Levin for adding two parts to Levin’s Wikipedia page. According to Breitbart, those included: “a paragraph about a hoax caller to Levin’s show and a line about Levin characterizing Sen. Bernie Sanders (I-VT) as a ‘radical Marxist who believes in violence.’” Levin noted on his show that this particular remark was in the context of the Alexandria terrorist shooting targeting Republican congressmen by a former Sanders campaign volunteer.

Adler highlighted how editors like “Localemediamonitor" are still allowed on the platform, despite a history of biased edits and occasional slaps on the wrist such as having edits removed:

Localemediamonitor, the most active in adding negative content to Levin’s page, has made only about 500 edits. Most of those edits are about radio personalities, particularly conservatives such as Dennis Prager of PragerU, and are overwhelmingly negative.

Another far-left Wikipedia editor “Snooganssnoogans'' has reportedly “been sanctioned previously for his editing of pages on conservatives.” Yet even so, he has been allowed to keep making edits on the platform. Far from being a politically neutral platform, it can only be so fairly sourced when left-wing ideologues take it upon themselves to undo vast amounts of edits they appear to personally disagree with. Adler noted:

Later in 2018, when an editor tried to remove some of the smears on Levin’s page, Snooganssnoogans repeatedly undid the user’s edits well in excess of what is allowed by Wikipedia policy in order to keep the material in the article, but faced no sanctions for his behavior.

The Breitbart article described a massive argument where Snooganssnoogans actively stopped other editors from showing positive reviews that a book by Levin received:

i've removed these reviews. the other editor refuses to accurately describe these reviews, thus misleading readers into thinking this book has received mixed reviews when in fact it's been panned by nonpartisan reviewers at RS but lauded by partisans for non-RS.

Snooganssnoogans also tried to accuse Levin, who is Jewish, of enabling anti-Semitic conspiracy theories. He intimated that a critique of liberal billionaire mega-donor George Soros was a statement of anti-Semitic hatred of Jewish people:

Levin falsely claimed that the Hungarian-American philantrophist [[George Soros]], who is the subject of a wide range of right-wing and anti-Semitic conspiracies, was involved in funding the whistleblower and the whistleblower's lawyers.

Adler painted a grim picture of why the media, academia, and Big Tech are so wildly biased today. He suggested that “Reliance on Wikipedia by news outlets, scientific literature, and Big Tech, has made it a popular target for editors looking to push an agenda.”

Even Wikipedia founder Larry Sanger has lamented how far the platform has fallen in recent years due to radical leftist political bias. In his personal blog, he commented that “Wikipedia no longer has an effective neutrality policy.”

Levin quickly acknowledged Breitbart’s piece on his Twitter account “for spending a great deal of time analyzing Wikipedia's years' long smears, lies, and spin campaign against my character and career. Thank you!”

Conservatives are under attack. Contact info-en-o@wikimedia.org and demand that Wikipedia treat conservatives fairly.. If you have been censored, contact us at the Media Research Center contact form, and help us hold Big Tech accountable.