The “big three” of ABC, CBS, and NBC were out in full force on Tuesday night following New Jersey Republican Governor Chris Christie’s 2016 presidential announcement to attack Christie over his temper and use the Bridgegate scandal to argue that it’s “fed his image as bully” leading to “a long road ahead” for the nomination.

Covering the story for the CBS Evening News, congressional correspondent Nancy Cordes invoked Bridgegate just over halfway into her report, but promoted it as having “fed his image as a bully” before playing an undated soundbite of Christie engaging with a heckler in which he told the man shouting to “sit down and shut up” (more on that clip shortly).

Cordes also mentioned how “[h]is popularity at home has sunk to 30 percent” and asked him after his launch event if “your low approval rating” should “be an issue in this race.”

Additionally, she went as far as to knock Christie’s chances of courting donors compared to fellow GOP candidate Jeb Bush: “Christie's troubles have cost him some donors and he does not have a big war chest like, say, Jeb Bush.”

Meanwhile, NBC Nightly News featured part one of Today co-host Matt Lauer’s exclusive interview with Christie. In his first question to Christie, Lauer asked about his decision to not run for president in 2012 and wondered if he worried that “you can't capture that genie and put him back in a bottle” and recapture his status as a GOP presidential frontrunner.

Later, Lauer told Christie that “[s]ome Republicans worry about your temper” and if he has “the temperament to be president of the United States.” In the middle of Christie’s answer, the same clip that was shown on CBS was played of Christie shouting at the heckler.

Turns out, the clip was from October 29, 2014 and was touted on ABC’s World News Tonight and NBC Nightly News that day thanks to the left-wing American Bridge PAC. ABC’s David Muir described it as “unscripted” with Christie “lashing out” in “a war of words.” On NBC that evening, now-departed anchor Brian Williams reported the Christie flew “off the handle.”

As the networks failed to do both then and on Tuesday, there was no mention of how the heckler was, as I reported, both “a Democrat and former Asbury Park city councilman in New Jersey who also founded a group that’s been critical of the pace of disaster funding being allotted in the state.”

Turning to ABC’s World News Tonight, correspondent Linsey Davis reported that Christie suffered “a hard fall” with Bridgegate and led to a situation where, with “14 Republican candidates and counting,” the New Jersey Governor faces “a long road ahead.”

Earlier on Monday, ABC’s Good Morning America focused on Christie’s unpopularity and the Bridgegate scandal with CBS This Morning striking much the same tone in the form of a discussion with Bloomberg’s John Heilemann.

The relevant portions of the transcript from the CBS Evening News with Scott Pelley on June 30 can be found below. 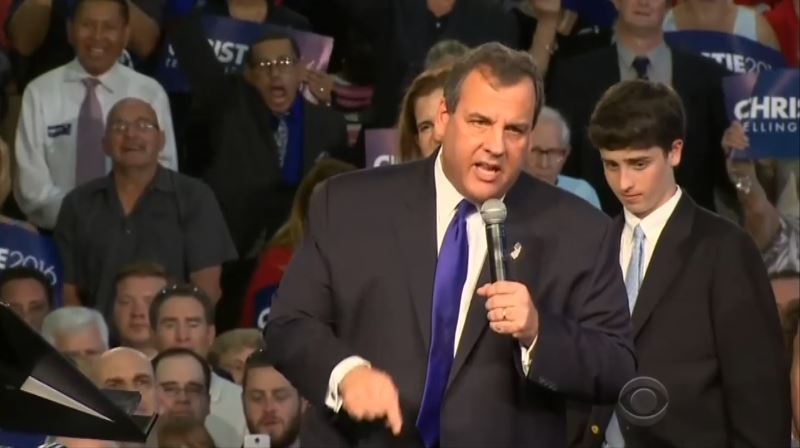 NANCY CORDES: He's known for his tough talk, but in his high school gym today, Christie said he's the only Republican who's shown he can listen to both sides.

CORDES: Christie said he learned to compromise as the Republican Governor of a Democratic state where he's elected twice.

CHRISTIE: So we rolled up our sleeves and we went to work and we balanced six budgets in a row. We've refused to raise taxes on the people of this state for six years.

GORDES: It's that swagger that had GOP voters begging him to run for president in 2012.

CORDES: But then came Bridgegate, a traffic jam created by Christie's appointees to punish a local mayor.

CHRISTIE: I had no knowledge of this of the planning, the execution, or anything about it.

CORDES: The scandal fed his image as a bully.

CORDES: His popularity at home has sunk to 30 percent. [TO CHRISTIE] Should your low approval rating here be an issue in this race? 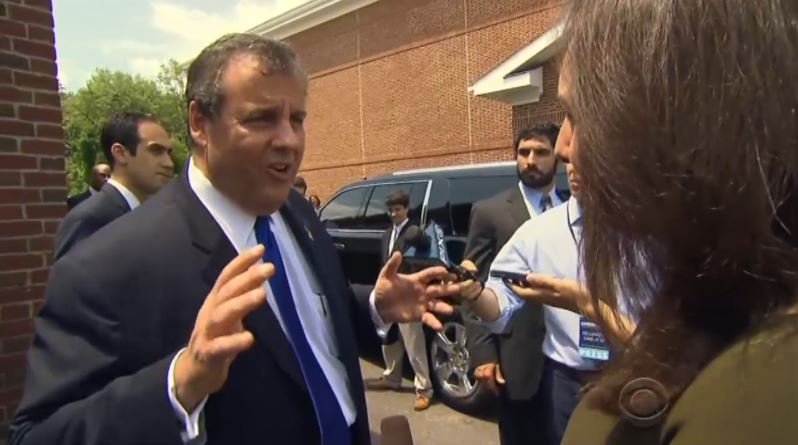 CHRISTIE [TO CORDES]: It won't be, you know. The fact is that, you know, I do hard things here and I accumulate political capital to spend it. That's the reason you do it in politics. Those people who don’t spend their political capital and put it in a frame on the wall, you know, to look at, that's not what leadership is about.

CORDES: Christie's troubles have cost him some donors and he does not have a big war chest like, say, Jeb Bush. So, he's focusing on New Hampshire, where he hopes independent voters will give him a big win early on. In fact, Scott, Christie is spending the next four days in that one state.