Following news on Wednesday that the Obama administration will send 450 additional U.S. troops back to Iraq to help train the Iraqi military against ISIS, ABC’s World News Tonight and the CBS Evening News chose to exclude any criticism of the Obama administration’s ISIS policy while NBC Nightly News made multiple critical points about the administration as Richard Engel declared: “It’s hard to see how a few hundred non-combat troops are going to make much of a difference.”

On the CBS Evening News, anchor Scott Pelley fretted in one of the show’s opening teases that “the President who wanted so much to get the U.S. out of Iraq is sending still more troops in.”

In his report, Pentagon correspondent David Martin touted how “[t]he U.S. mission is to provide planning and equipment for Iraqi forces as they regroup in an effort to retake Ramadi.” As far as assigning any blame for the gains made by ISIS, Martin cited the Iraqi government as having “been unable to provide enough recruits.”

ABC neglected to offer anything better as anchor David Muir reported that “the first order of business of many of those U.S. troops deployed is to help Iraqi fight take back Ramadi” while Martha Raddatz provided more footage from her tour of an undisclosed U.S. airbase in the region. Speaking with Muir, Raddatz ruled that “[t]he Iraqi troops clearly need help” and how Iraq “is still a very dangerous place.”

With ABC and CBS out to lunch, NBC Nightly News stepped up and provided numerous critiques of the Obama administration. Once again, chief foreign correspondent Richard Engel declined to mince words and started his report by simply stating that “[t]he ISIS advance hasn’t been slowed by the U.S.-led war against.”

After mentioning claims by ISIS from last week that it threw a gay man off a building, Engel sarcastically quipped: “So much for progress. ISIS still has a firm grip on vast areas of Iraq and Syria.”

Engel’s tone allowed him to tee up NBC News military analyst and retired General Barry McCaffrey to slam the move to send in an additional 450 troops: “Probably not. I think it's a largely irrelevant gesture to indicate that we're doing something about the deterioration of the situation.”

Near the end of the segment, Engel provided more blunt remarks to interim anchor Lester Holt:

The U.S. military fought for about a decade with hundreds of thousands of ground troops, a limitless budget, 24-hour air cover to battle an insurgency that is far less dug in than ISIS is now. So, it's hard to see how a few hundred non-combat troops are going to make much of a difference[.]

NBC’s Engel and McCaffrey found some unlikely bedfellows in their criticism in the panel from Fox News Channel’s Special Report with Bret Baier as all three panelists panned both the administration’s decision and overall strategy.

“I think it's a recognition of reality and doubling down the strategy that so far isn't working,” remarked Foreign Policy managing editor Yochi Dreazen.

Fellow panelist and FNC contributor Charles Krauthammer blasted this decision as “not a serious strategy” considering the reality that “the President cannot be open about what he wants to do because his obvious policy is to do the minimum to make for show some appearance of a strategy so that he can hand this over to his successor in January 2017.”

The relevant portion of the transcript from June 10's NBC Nightly News can be found below.

[ON-SCREEN HEADLINE CAPTION: Back to Iraq] 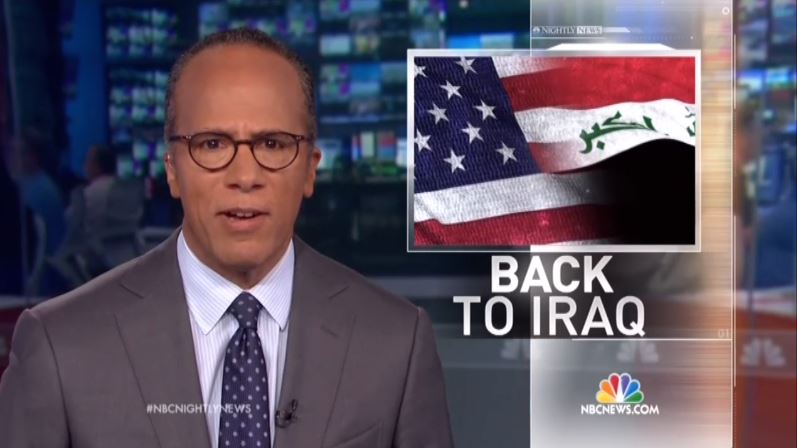 LESTER HOLT: More than three years since the U.S. combat role ended in Iraq, the White House said today hundreds more American troops are heading back, joining several thousand already there to help train and advise the Iraqi army in the fight against ISIS and a lot of Americans are asking: Can this mission work? Our chief foreign correspondent Richard Engel, who spent over five years in Iraq, has our report.

RICHARD ENGEL: The ISIS advance hasn't been slowed by the U.S.-led war against it. ISIS captured Mosul in Iraq one year ago today and last week, released pictures it claims showed a gay man being thrown off a building in the city. So much for progress. ISIS still has a firm grip on vast areas of Iraq and Syria. Last month, they captured Ramadi, just 60 miles from Baghdad, prompting the Obama administration today to unveil plans to send in more American troops. An extra 450 will soon head to Iraq as trainers, raising the total to more than 3,500. The new forces will go right into eastern Anbar Province, between Ramadi and Fallujah, both in ISIS hands. Not to engage in direct combat, administration officials tell us, but to support and equip local forces, in particular Sunni tribes who want to stand up and fight ISIS. Will it work?

NBC NEWS MILITARY ANALYST GEN. BARRY MCCAFFREY (RET.): Probably not. I think it's a largely irrelevant gesture to indicate that we're doing something about the deterioration of the situation. 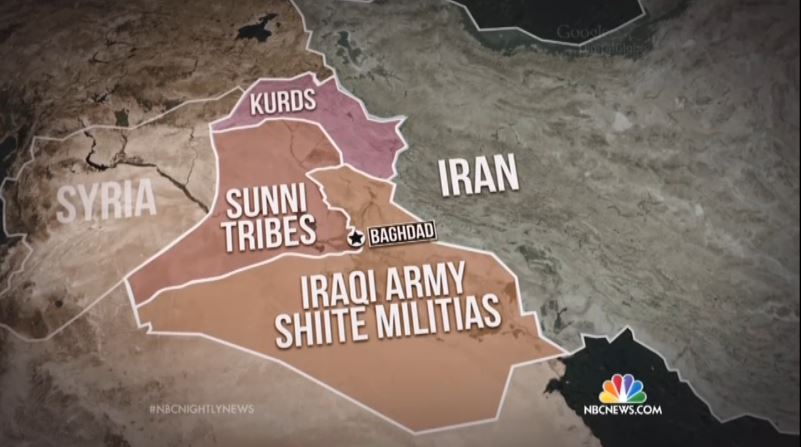 ENGEL: A current senior U.S. military official tells NBC News he agrees, the new troops probably won't change much on the battlefield, which is already a hodgepodge of rival groups. Kurds in the north, backed by the U.S. The Iraqi army and Shiite militias. backed by Iran and after today, Sunni tribes in the west, also backed by Washington. U.S. Troops in Iraq will try to bridge these deep differences to fight Islamic radicals and we all know how well that turned out before. The U.S. military fought for about a decade with hundreds of thousands of ground troops, a limitless budget, 24-hour air cover to battle an insurgency that is far less dug in than ISIS is now. So, it's hard to see how a few hundred non-combat troops are going to make much of a difference, but today the White House was stressing this is an important step to build, quote, “the capacity of the Iraqi –”

HOLT: But essentially training some of the same people that were trained before by the U.S.?