While all three of the major broadcast networks on Tuesday night covered President Barack Obama's veto of the bill passed by Congress approving construction of the Keystone XL oil pipeline, ABC, CBS and NBC failed to mention Obama's veto came despite a majority of Americans supporting the pipeline. Total coverage amounted to one minute and six seconds.

Despite that, ABC’s World News Tonight anchor David Muir hyped the news as the President “making good on his promise to veto the controversial Keystone pipeline bill.” Over on the CBS Evening News, anchor Scott Pelley described it as “the biggest showdown yet” between President Obama and “the new Republican-led Congress.”

When it comes to the most recent polls asking Americans whether they support the construction of Keystone, a litany of polling data has shown that the American people are on board with it. In a Fox News poll released on January 14, 65 percent replied that the President should sign the legislation with only 22 percent of voters suggesting that it should be vetoed.

An article on CNN.com from January 15 cited a CNN/ORC poll that 57 percent of Americans back the construction of the pipeline that would carry oil from Canada’s tar sands to the Gulf Coast with only 28 percent in opposition.

>>> All of NewsBusters coverage on the Keystone XL oil pipeline <<<

On that same day, a separate poll from the Pew Research Center came out and also reflected the support for the project, with 59 percent in the affirmative and 31 percent not supporting the pipeline.

With yet another example, an NBC News/Wall Street Journal poll from January 20 had a plurality of favoring Keystone at 41 percent with 20 percent against it.

In one final note on the network coverage, each anchor did highlight the fact that Republicans hope to continue the fight through an override of Obama’s veto, but currently lack the votes in the House or Senate to do so.

The brief that aired on ABC’s World News Tonight with David Muir on February 24: 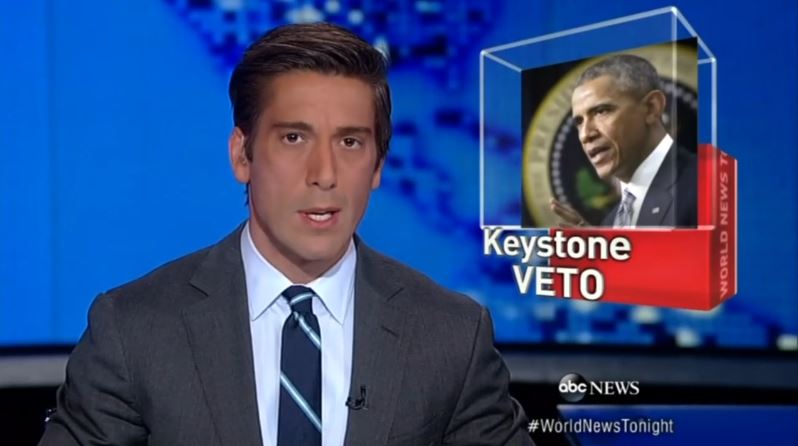 DAVID MUIR: Back here at home now, and to the White House. President Obama making good on his promise to veto the controversial Keystone pipeline bill sent to his desk by the Republican-held House and Senate. You'll remember the Keystone pipeline would have traveled from Canada through Nebraska, right down to the Gulf. Republicans tonight vowing to fight, though, they are expected to come up short on the votes needed to override the veto.

The transcript of the brief from the CBS Evening News with Scott Pelley on February 24 is below. 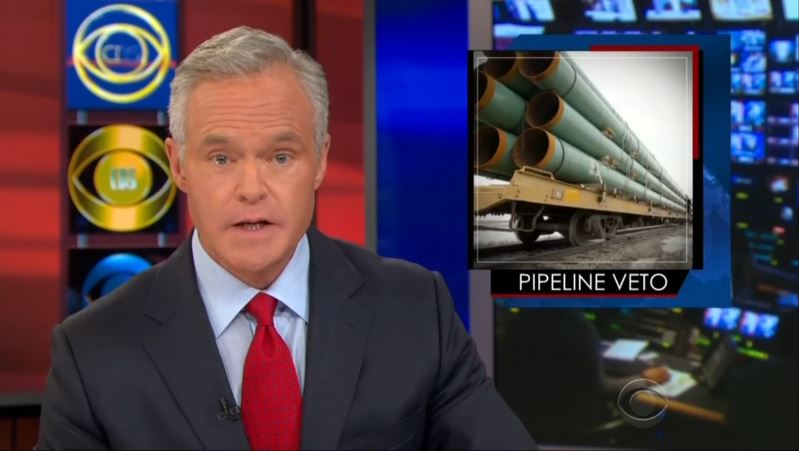 SCOTT PELLEY: Today, in the biggest showdown yet with the new Republican-led Congress, President Obama vetoed a bill to clear the Keystone XL oil pipeline between Canada and Texas. The President says he's still considering the environmental impact. Republicans do not appear to have the votes to over-ride the veto, which is only the third in Mr. Obama's presidency.

The transcript of the news brief from February 24's NBC Nightly News:. 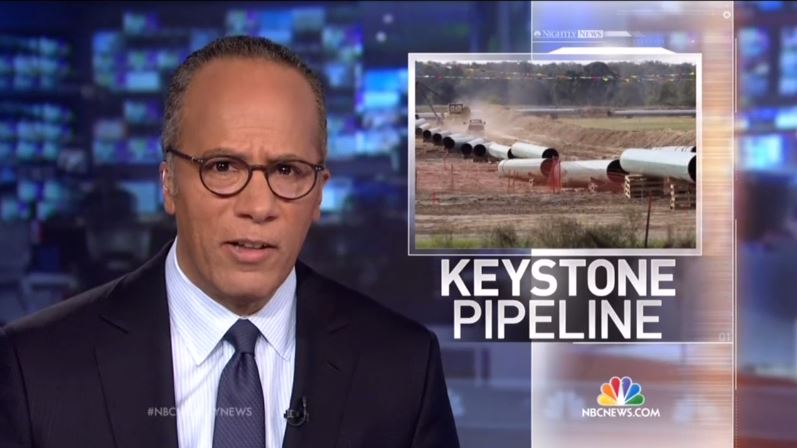 LESTER HOLT:  One more note from Washington, as he said he would, President Obama today vetoed legislation that would have given the green light to extend construction of the Keystone XL oil pipeline from Canada all the way to the Gulf Coast. It's just the third veto of his presidency. Congressional Republicans may try to override the veto, but they appear to be just short of a two-thirds majority in the House and Senate that they would need.