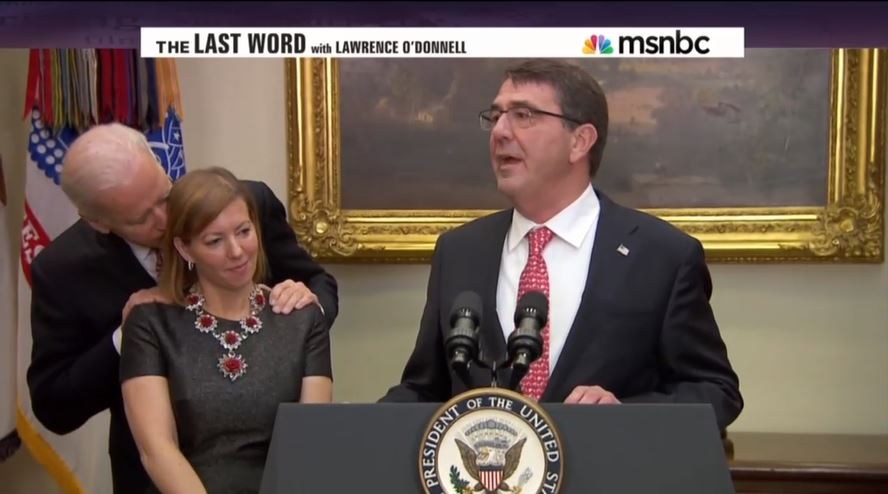 During the swearing-in ceremony of new Secretary of Defense Ashton Carter on Tuesday, Vice President Joe Biden grasped the shoulders of and whispered something to Carter’s wife, Stephanie, in what made for the latest awkward Biden gaffe and predictably spread on social media throughout the remainder of the day.

When it came to receiving a lighthearted mention in the network evening newscasts on Tuesday night, this new example of the Vice President causing headlines apparently made none with the networks. This omission follows the networks also ignoring Biden on Thursday evening after he referred to a former Democratic Congressman from Iowa as his “old butt buddy.”

It should also be noted that this was not the only Biden gesture that the networks didn’t mention during their Tuesday evening newscasts. While speaking at the first day of the White House summit on violent extremism (not Islamic extremism specifically, but that’s another matter, Biden made this remark about Somalis who live in his home state of Delaware:

If you ever come to the train station with me, you'll notice that I have great relationships with them because there's an awful lot of them driving cabs and are friends of mine. For real, I’m not being solicitous. I’m being serious.

Here’s how a Fox News article summed up Biden’s interaction with the wife of the new Secretary of Defense:

It was just another example of Vice President Biden grabbing headlines in a feel-good moment.

What began as a routine swearing-in ceremony for new Defense Secretary Ashton Carter on Tuesday morphed into a social media celebration when Biden awkwardly placed his hands upon Carter's wife, Stephanie.

As Carter began speaking, Biden beckoned Stephanie Carter from across the room, then put both hands on her shoulders. They lingered there for roughly 20 seconds until Biden leaned in and whispered in her ear.

Soon after, Ashton Carter reached over to place his right hand on Stephanie's shoulder.

As The Washington Post’s Nia-Malika Henderson noted, this was far from Biden’s first awkward encounter where he put his hands around someone as he did so to a female biker in Iowa in 2012 and Delaware Senator Chris Coons’s (D) daughter back in January.

Henderson also gave her thoughts on what could possibly have been going through the mind of Stephanie Carter: “I hate to read too much into what Stephanie Carter might be thinking in this photo, but she certainly does not look happy. More like annoyed.  Perhaps Biden should just go back to the usual grip and grin photo op.”