The nation’s major broadcast networks continued their blackout on Friday morning of not covering the U.S. Senate’s passage of the Keystone XL oil pipeline with zero mentions on their morning newscasts.

Following the Senate’s passage of the bill on Thursday by a bipartisan margin of 62-to-36, the networks passed on even devoting a news brief to the topic during their Thursday evening news programs. When it came to their no coverage on Friday, plenty of other things seemed to capture their attention.

NBC’s Today aired a four-minutes-and-21-second segment that previewed and then unveiled an ad promoting their own show that will run during Sunday’s Super Bowl (which, naturally, is airing on NBC). ABC’s Good Morning America spent 21 seconds on surveillance footage of thieves in Canada stealing an ATM that ended up falling on one of the suspects while he and his accomplice attempted to roll it out on a dolly cart.

The Senate passing a bill to approve construction of the Keystone oil pipeline. Nine Democrats joined Republicans to pass the measure. Republican House leaders will now decide whether to vote on the senate bill or try to reconcile it with their version, which already passed. President Obama vows to veto any bill approving the pipeline while the administration continues to review the project.

Surprisingly, Morning Joe emerged with the most airtime by spending a total of two minutes and 51 seconds on Keystone. Following an introduction by the BBC’s Katty Kay, the program’s panel predicted what the fate of the pipeline would be following President Obama’s expected veto.

Bloomberg’s John Heilemann argued that there’s a possibility that the Obama administration could “decide that it wants to negotiate” a compromise with the Republican-led Congress “on a larger energy or climate package” that would end with the President “approving this on its own merits.”

MSNBC contributor and former Democratic Governor of Vermont Howard Dean joined the debate by arguing why the United States should go through with this “because most of the oil’s going to be exported.”

On the other hand, Dean fretted that “the problem” with remaining opposed to Keystone is that it would continue to negatively affect the country’s “relationship with our closest ally, which is Canada”:

They have taken this on as a cause. You know, they've always – this is a small country, population-wise next to a big country. They’re very sensitive about this. This has become a national cause in Canada. He's [Obama] got to take that into consideration as well.

Over on the print side, the major American newspapers didn’t do much better. As the Media Research Center’s Tim Graham reported, the top papers buried the Senate’s passage of Keystone on Friday morning with articles inside their A-sections.

The transcript of the news brief from CNN’s New Day on January 30 can be found below. 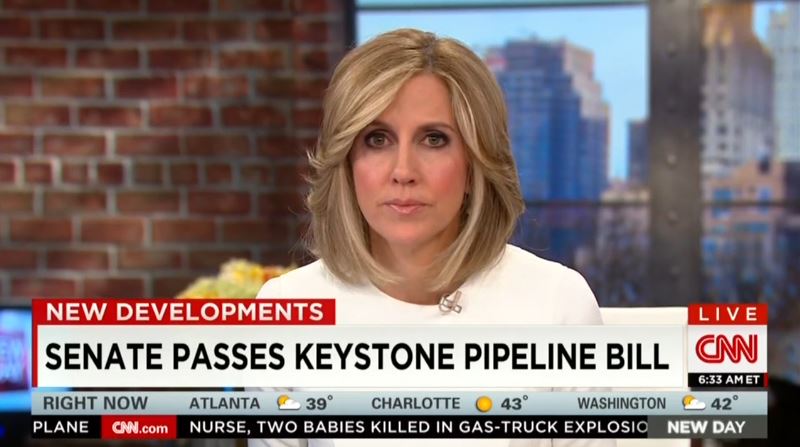 ALISYN CAMEROTA: The Senate passing a bill to approve construction of the Keystone oil pipeline. Nine Democrats joined Republicans to pass the measure. Republican House leaders will now decide whether to vote on the senate bill or try to reconcile it with their version, which already passed. President Obama vows to veto any bill approving the pipeline while the administration continues to review the project.

The relevant portions of the transcript from MSNBC’s Morning Joe on January 30 are transcribed below. 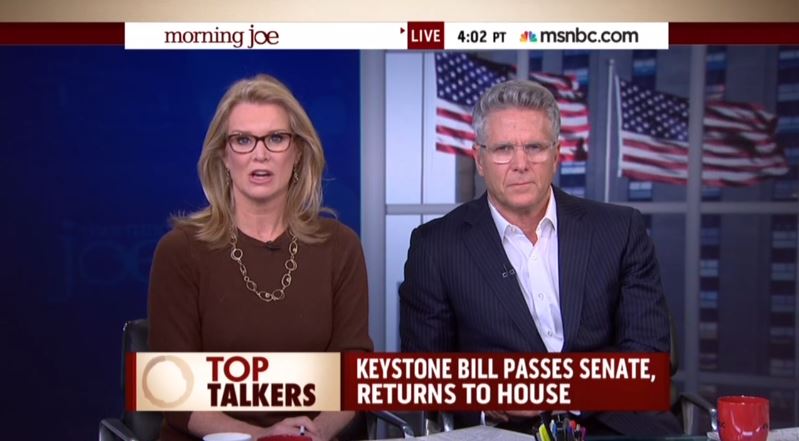 KATTY KAY: The Senate just passed a bill approving the Keystone pipeline but it is almost certainly heading nowhere. The White House is already saying they will veto it. Nine Democrats joined their Republican colleagues in support of the transnational pipeline.

The President, ultimately, has the final say, though, in whether this project is approved since it crosses international borders. It would be just his third veto.

Congressional Republicans are considering adding the measure on to another future bill to try to get the plan across the goal line. What do you reckon, John? Do you think it gets anywhere?

HEILEMANN: I think the question is what happens after the veto and whether there's an opening for the White House to decide that it wants to negotiate and would – it's possible the administration will end up approving this on its own merits.

Part of its – the veto argument that the administration’s making is we're still not finished doing the internal review. The State Department’s done a review that hasn't completed the review. It's possible that the White House will end up wanting to approve this anyway and there a trade will be made on a larger energy or climate package. 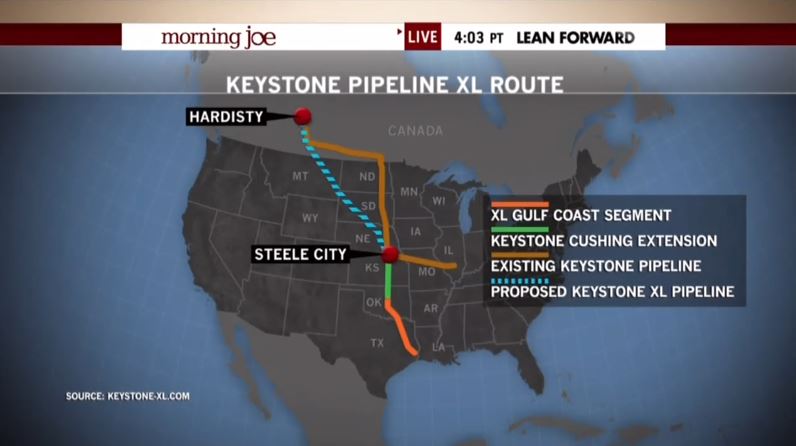 HOWARD DEAN: See, this is the interesting part about this. You can argue the domestic business about this. Why should we export, you know, because most of the oil’s going to be exported? The problem is – this is a major impediment with our relationship with our closest ally, which is Canada. They have taken this on as a cause. You know, they've always – this is a small country, population-wise next to a big country. They’re very sensitive about this. This has become a national cause in Canada. He's got to take that into consideration as well.

KAY: Gene, how does the fact that the State Department's own report came out fairly ambivalent on the environmental impact of keystone, impact what the White House is now looking at?

EUGENE ROBINSON: You know, I've always thought that kind of reflects the view in the White House. I don't think that they care passionately on one side or the other about building this pipeline and I actually tend to agree with the premise that they can use this as a bargaining chip, as something to give up and exchange for something else and I frankly think they would be okay in doing that. I it would anger a lot of environmentalists in the democratic coalition, but President Obama doesn't, you know, he can anger anybody he wants at this point, I suppose.

HEILEMANN: What you’ve never heard from the President is that this is a bad idea. The President has always said this is my prerogative and that the Congress is trying to end run what should be the White House executive authority to make a decision about whether this is a good thing or not, but you don’t hear the President decrying it. He's not siding with the environmentalists generally. He's basically saying, you need to let us get to our process first. So it’s a process argument not a substantive argument which I felt they left themselves wiggle room to approve it.

KAY: So, get through this round, veto it and then approve some modification of it? 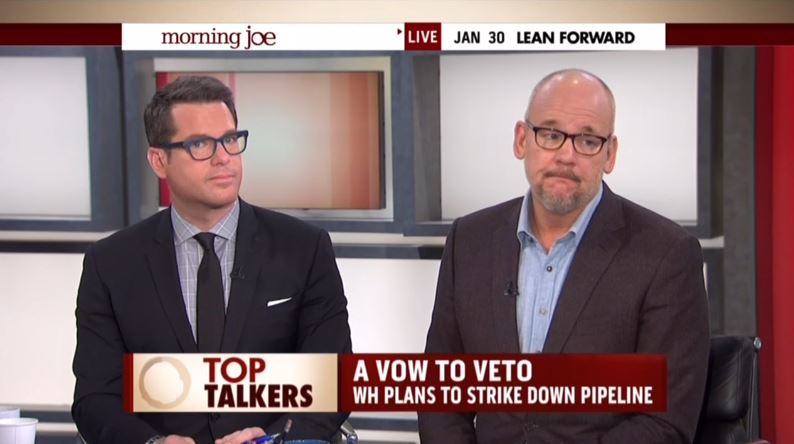 HEILEMANN: Either approve it or, again, as Gene said, make some kind of a deal on a broader energy package with Republicans.

KAY: To get something.

THE NEW YORK TIMES’S JEREMY PETERS: With Keystone, this was just a larger proxy fight over, you know, global warming.