During his MSNBC show All In on Monday, Chris Hayes put up his best defense of far-left New York City Mayor Bill de Blasio against criticism from NYPD officers and their union, lamenting that de Blasio has been subject to “brutal attacks” over the past few weeks while praising him for a drop in crime during 2014.

At the start of a segment about the drop in crime and a changing of tactics, Hayes chose to chastise the NYPD’s top union for speaking and acting in opposition to the Mayor: “If, the Mayor has taken to dreading the spotlight over the past few weeks as he's come under brutal attack by New York’s police unions, today's press conference was probably one he looked forward to because, today, he got to announce what appears to be a major victory for the very policies that helped kick off an NYPD backlash.” [MP3 audio here; Video below]

Following a series of graphics showing drops in police stops, murders, robberies, burglaries and arrests using force, Hayes played a clip of de Blasio praising the NYPD and how he often hears people from around the world speaking positively of them whenever he travels outside the city.

Along with former Baltimore police officer and author Peter Moskos, Hayes spent the rest of the segment arguing that the move by the NYPD to effectively stop arresting those for minor crimes has given the anti-police protesters exactly what they wanted and demonstrated against.

The relevant portion of the transcript from MSNBC’s All In With Chris Hayes on January 5 can be found below. 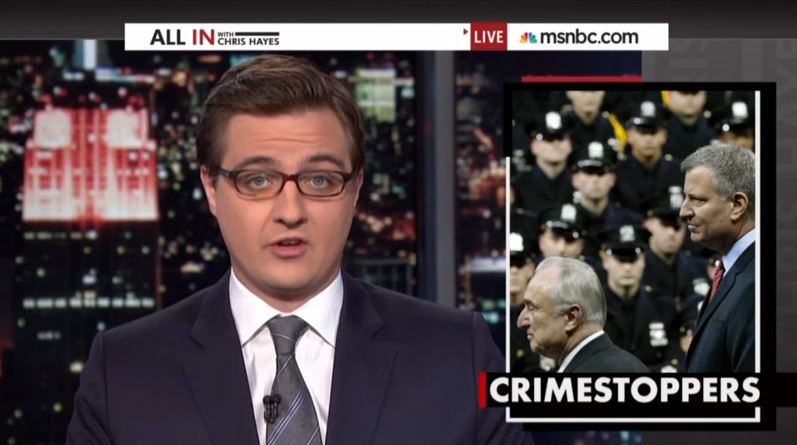 CHRIS HAYES: All eyes are on New York Mayor Bill de Blasio today giving his first press conference in the days immediately following the murders of two NYPD officers on December 20. In his first public appearance since scores of police turned their backs toward him yet again at the funeral yesterday for Officer Wenjian Liu even after NYPD Commissioner Bill Bratton specifically asked them not to. If, the Mayor has taken to dreading the spotlight over the past few weeks as he's come under brutal attack by New York’s police unions, today's press conference was probably one he looked forward to because, today, he got to announce what appears to be a major victory for the very policies that helped kick off an NYPD backlash. De Blasio ran for office on a pledge to reform policing practices in New York, especially stop-and-frisk, the controversial tactic that resulted in a disproportionate number of people in color being patted down and interrogated by police, for often arbitrary reasons and despite all the warnings that changing the policy would result in skyrocketing crime and a return to the dangerous New York of the 1970s, the Mayor today got to announce that overall crime dropped 4.6 percent in 2014, the first year of his term. Over the last year, the total murders, robberies and burglaries in New York fell to their lowest rates in a decade. All while the number of police stops continue to plummet for the third year in a row. The percentage of arrests using force fell to a ten-year low. While the policy changes originated at City Hall, de Blasio was very careful to credit the police themselves for the drop in crime, heaping praise on the NYPD.