Atheist Salon Writer: ‘Would Anyone Truly Mourn’ Christmas ‘If We Did Without It?’ 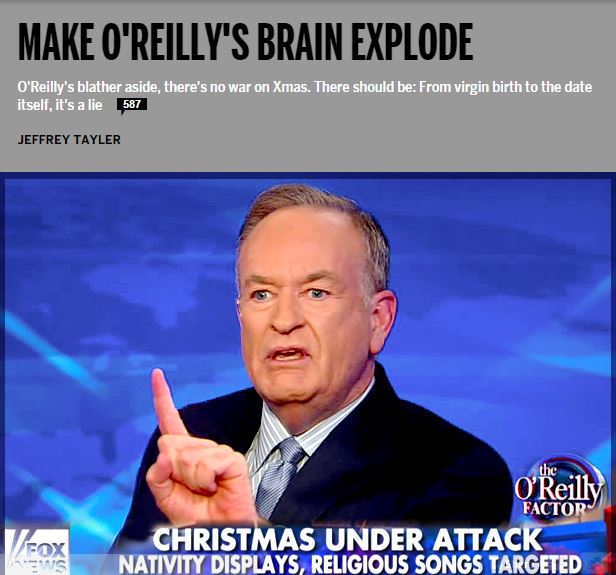 With Christmas three days away, one liberal atheist took to the far-left website Salon to dismiss the existence of a “war on Christmas” spotlighted annually by conservatives and news pundits, led by the Fox News Channel’s (FNC) Bill O’Reilly. At the same time, however, the author seemed perfectly fine waging war on Christmas himself, claiming that Jesus Christ never existed and wondered if “anyone” would “truly mourn the holiday if we did without it.”

In a piece entitled “Let’s Make Bill O’Reilly’s Head Explode: We Desperately Need a War on Christmas Lies,” Atlantic magazine contributing editor Jeffrey Tayler began by summarizing one of O’Reilly’s latest segments regarding the “war on Christmas” that discussed into a series of billboards being sponsored by the American Atheists.

Reacting to the segment, during which the group’s public relations director said the billboards came about as a result of “atheists feeling alienated as this time of the year,” Tayler lamented: “How tragic and telling it is that in 21st-century America those who stand by reason and abjure myth should need consolation and encouragement.”

With the exception of a few, fleeting references, O’Reilly was cast aside as the main idea of the post and trashing Christianity and Christmas became the new one. Picking up on the theme of atheists being distraught during the holidays, Tayler opined:

There is compelling evidence that atheists are one of the most discriminated-against groups on earth, but if they raise their heads and speak up in the Land of Free Speech, they must be confronted and slapped down.

Let me say right away that I, as an atheist, have never had and do not now have anything against Christmas. To each his or her own. But the nonsensicality inherent in the right’s cries of “the war against Christmas!” as well as said war’s nonexistence, put me in something other than a Yuletide mood and prompt me to hit the computer keyboard. And for reasons that go far beyond celebrating this particular holiday.

Last time I checked, store windows were decorated with boughs of holly and blinking lights, their tinsel-strewn aisles thronging with folks eager to express affection for loved ones in the sole way many know: buying them stuff.

He also brought up the phrase “one nation under God” and dismissed the notion because “[t]he word “Christian" appears exactly zero times in the U.S. founding documents.” In making that accusation, Tayler clearly ignored the mention of “Creator” in the Declaration of Independence as well as the personal writings and exchanges by and between the Framers that showed how religious many indeed were.

The piece then called into existence Jesus Christ simply because of contention by some scientists that Jesus wasn’t born on December 25. Due to this, Tayler proclaimed that “[t]here is no evidence that Dec. 25 should be anything more than just another day.”

From there, the spewing of anti-Christian rhetoric by Tayler continued [emphasis mine]:

But then, it’s not surprising that Jesus’ birthday should be so hard to pinpoint. Some 2,000 years after the alleged event, religious scholars, despite their best efforts, have still found no proof that Jesus even existed. Although it might seem reasonable to suppose such a one as he walked the earth in the Middle East, historical records kept by the Romans (then in charge of Judea and Samaria) and contemporary chroniclers make no mention of him. The Gospels are not historical records and don’t count; they were composed decades afterward. It has even been credibly proposed that Paul and his cohorts created the savior with strokes of their quills by mythologizing history. Footnote: If you’d still like to believe in a prophet whose existence has been established beyond the shadow of a doubt, try Muhammad.

Would anyone truly mourn the holiday if we did without it? How maddening become the carols, how cloying the endlessly proffered Seasons’ Greetings, how depressing the relentless tidings of joy, how un-silent the night! And all this over what? If you do not believe, what are you supposed to celebrate? Mistletoe? Overcrowded highways and airports? Reunions with estranged family members you studiously avoid the rest of the year?

Mean-spirited as it might seem, impressing the truth about Christmas on children is just the right thing to do in the run-up to Dec. 25, an eminently “teachable” time of year.

While on the subject of Christianity, the author took a moment to fondly think of a world in which no one stood up for the lives of the unborn, believed in God, or voted for a Republican Party that Tayler lambasted for forcing “Americans to vote against their interests” [again, emphasis mine]:

Once one grasps the untruth of Christianity, the whole societal edifice built to shelter believers from reality and impose their way of thinking and living on the rest of us should come tumbling down. Imagine what such an awakening, such a wising-up, would conceivably herald: an end to the child-abuse teaching of creation fables instead of facts in some schools; a cessation of guilt and conflict over sex and the female body; a questioning of millennia-old misogynistic patriarchal beliefs buttressing the maltreatment of women; the probable death of the pro-life movement and campaigns to restrict access to abortion and birth control; the collapse of shyster evangelists and their hugely profitable “ministries”; the release of billions of previously tax-exempt dollars into public coffers; the discrediting of the End Times nihilism that permeates the country’s discussions on a range of problems urgently requiring rational solutions; and a peaceful demise of the decoy culture wars the Republicans wage to persuade ever-more economically disadvantaged Americans to vote against their interests.